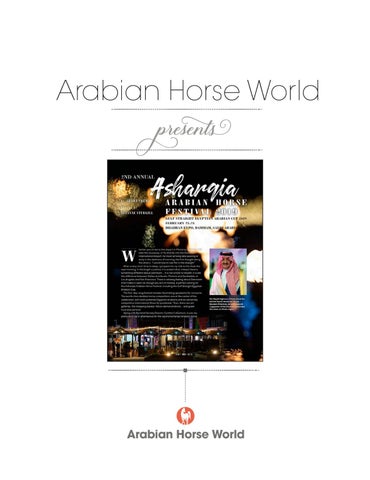 b y SHAWN CREWS Photos by

hether you arrive to the airport in Manama, Bahrain, and take the causeway, or fly directly into the Dammam International Airport, for most arriving late evening or early in the darkness of morning, the first thought along the drive is, “I would love to see this in the daylight.” After a very short time to sleep, I jumped into my ride to the show the next morning. In the bright sunshine, it is evident that, indeed, there is something different about Dammam … it is not similar to Riyadh. It is like the difference between Dallas and Austin, Phoenix and Scottsdale, or Los Angeles and San Francisco. There is relaxing feeling about Dammam that makes it seem as though you are on holiday. A perfect setting for the Asharqia Arabian Horse Festival, including the Gulf Straight Egyptian Arabian Cup. The five-day-long festival includes fascinating spectacles for everyone. The world-class Arabian horse competitions are at the center of the celebration, with both purebred Egyptian Arabians and an extremely competitive International Show for purebreds. Then, there are art galleries, the shopping bazaar, falcon demonstrations … and great food everywhere! Along with Pyramid Society Director Cynthia Culbertson, it was my pleasure to be in attendance for the second Asharqia Arabian Horse

His Royal Highness Prince Saud bin Naif Al Saud, Governor of the Eastern Province, an enthusiastic supporter of the Festival, attended the show on finals night.

Prince Ahmed bin Fahd bin Salman bin Abdulaziz Al Saud, Deputy Governor of the Eastern Province, with an exact replica of the famed 1821 Rzewuski Manuscript (Sur les chevaux orientaux et provenants des races orientales) from the National Library of Poland. Count Waclaw Rzewuski (1784-1831) was an Arabic scholar who lived among the tribes of Arabia and wrote of their culture and folklore as well as Arabian horses. He also imported many Arabian horses from the desert to Europe.

Festival. I was so impressed with their first, even though it meant a killer travel schedule from Scottsdale to be in Dammam, I could not think of missing out on their second show. It is such a contrast to what we Americans are accustomed to on the show scene. The people at the hotel made a big deal out of making sure I had my show entry pass. Now, in the last ten years, at least, I have not worried about having my “show pass” to get into any big show in the States. Pulling into the facility the next morning, I was happy that the hotel people had looked out for me, because it was like getting into a Rolling Stones concert. The general admission sections at the festival are also inviting, and make no mistake, the locals are there to cheer for their “home team.” It sent chills up my spine watching them cheer on the young Saudi handlers. Yes it’s ambiance, but it’s also an energy that demonstrates this region’s love for the Arabian horse, and for those who love them. Mr. Mohammad Al Matrodi, the Festival’s Founding Organizer, attributes the show’s success to its very generous, enthusiastic show sponsors as well as the country’s dignitaries who make it a point to be there — not as a duty, but because they too love the Arabian horse. Making the festival a big hit with the locals, Mohammad has been quite the visionary when it comes to drawing interest to the Straight Egyptian horses of Saudi Arabia. Mohammad is not just a good organizer — he knows straight Egyptians, and Saudi Arabia is breeding some of the world’s best. On Friday evening, at the close of the International Show, and to welcome everyone to the Gulf Straight Egyptian Arabian Cup, breeder

Long time farm manager for Alfala Stud, Enrique Castillo Pineyrua, captured in this jubilant moment, thrilled to have the class winner in the six- to eight-year-old mares, and the show’s Gold Champion Mare.

Sheikh Khalid Hassan Al Gahtani graciously hosted a special dinner at his serene, beautiful farm — Salayel Arabian Stud. Sheikh Khalid is genuine, warm, and hospitable. I had the chance to see most of his exceptional straight Egyptian horses last year. He is not one to call attention to himself or his horses, yet he is an ambassador for all in the region. The first straight Egyptian classes started on Saturday … early afternoon (my kind of show). I am one of those who can’t stay out of the warm-up ring. So I stood at the in-gate when a huge two-year-old colt caught my eye. I attempted to ask his handler about the colt’s breeding and who owned him. A friend of the handler told me, this guy — the handler — owns the colt. I asked again, because it is so rare at this depth of competition that an owner leads his

GULF STRAIGHT EGYPTIAN ARABIAN CUP 2019 DAMMAM, SAUDI ARABIA FEBRUARY 23-24 JUDGES AND OFFICIALS: LEFT TO RIGHT: Mr. Marco Pittaluga, Italy; Mr. Majed AlMehyawi, Saudi Arabia; Mrs. Anna Stefaniuk, Poland; Mrs. Claudia Darius, Germany; Mr. Sufian Taha Al Husseini, Palestinian Territories; and Mr. Nashaat Hegazy, Egypt (not pictured). own horse — especially a huge two-year-old colt. It turns out that the handler did own him, and in such a deep, good-sized class (and the first horse to show), this owner and his colt held an impressive winning score until the second to last colt to show. What I enjoyed the most about watching this scenario was the way that the judges treated this entry. They did not know that this guy was showing his own colt, and still they could not have been more respectful or patient when the colt was a handful in center ring. They judged the colt on his quality — and they obviously liked him a lot! I will be following this one, but more than that, this speaks to this judging team. They were pros for sure, with scores so close throughout the show. Several ties made for a real “edge of your seat” drama in the championships. Speaking of handlers, there were some of the world’s most talented in that arena. Such a

Following a lavish brunch hosted by Abdul Aziz Bukanan it was a treat to see many representatives of the Kenana Arabians Breeding Program. The filly pictured was a favorite!

pleasure to watch and enjoy their passionate presentations. The judges echoed the same sentiments. I spoke with Mrs. Darius after the show and she expressed how impressed all the judges were with the depth of quality in the championships. In contrast to last year’s show, there was a huge increase in winners who were bred by their owners. That is a big deal. Also, I could see that everyone was pleased to have more entries from the entire region, mostly from Bahrain and Kuwait. The Gulf Straight Egyptian Arabian Cup is beginning to grow solid roots. I won’t be surprised if this show becomes a “must” on many breeders’ calendars. As great as the show was, getting to visit Kenana Arabian Stud and Alwadi Stud was a special highlight of the trip for me. Thanks to both for such amazing hospitality. I hope readers will enjoy the photos that Suzanne Sturgill captured. These beautiful snapshots printed in Arabian Horse World means we will be bringing more friends with us to Dammam next year.

One of the impressive stallions being presented for guests at the beautiful Alwadi Stud.

and the Gulf Straight Egyptian Arabian Cup, by Shawn Crews