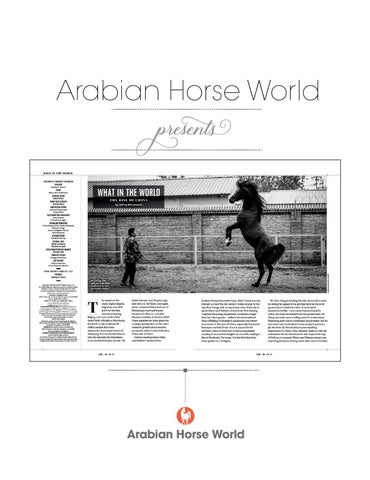 WHAT IN THE WORLD THE RISE OF CHINA

Copyright © 2019 by AHW Media Group, LLC. All rights reserved. Reproductions of contents, either whole or in part, not permitted without written consent of publisher. Address all advertising and subscription related queries to:

Mr. Lin Guo Xian with one of his black stallions at his farm just outside Beijing.

he speed on the train’s digital display edged up over 300 km/h for the first time since leaving Beijing. I am now north of the Great Wall, officially in Manchuria, bound for a city of almost 10 million people that most westerners have never heard of, Shenyang. It is not my first time to this city situated 120 kilometers from the North Korean border. My

initial visit was over 15 years ago with the U.S. Ski Team, and again when I coached China and one of Shenyang’s most well known inhabitants, Nina Li, a double Olympic medalist, in Sochi in 2014. These experiences have given me a unique perspective on the city’s meteoric growth and economic prosperity, which is also indicative of the rest of China. I will be meeting Glenn Petty and Debbie Fuentes of the

Arabian Horse Association here. After I check into the Shangri La near the city center, I make my way to the top-floor lounge with an expansive view of the city to await Glenn and Debbieâ&amp;#x20AC;&amp;#x2122;s arrival later that evening. I capture the young receptionistâ&amp;#x20AC;&amp;#x2122;s attention longer than her other guests â&amp;#x20AC;&amp;#x201D; unlike in the international cities of Beijing or Shanghai, westerners are rather uncommon in this part of China, especially those with blue eyes and blond hair. It is not unusual in far northern China to have four or five young people wanting to try out their English on me while waiting in line at Starbucks. For many, it is the first time they have spoken to a foreigner.

Mr. Xian Jiang is funding this trip, as we will, in part, be aiding his appeal to be granted land by the local government to build his vision of an Arabian equestrian facility. Land cannot be purchased in China, but must be leased from the government. Mr. Jiang currently owns a riding center in a downtown Shenyang park and is a champion dog breeder, but he has never seen an Arabian horse except in pictures. (At the time, his first Arabians were awaiting importation to China.) This, however, does not dim his enthusiasm for the breed and in this respect his leap of faith is not unusual. Many new Chinese owners are importing Arabians having never seen one in the flesh.

Mr. Jiang’s wife and two sons with the stallion they purchased.

Mr. Wen Chu of Yihe Farm outside Beijing would be the exception and has shared Mr. Jiang’s enthusiasm for longer. Mr. Chu has been involved with the Arabian horse for more than 20 years after seeing an importation of Arabians from Japan in 1993. They were a gift from a Japanese business owner to the Chinese government. Mr. Chu was completely enthralled with their beauty and began to shift his business interests towards Arabians. He studied as best he could on the Internet, but his most important learning came on his frequent trips to the U.S. and the Scottsdale Show. The first horse he imported was the black stallion and multiple champion Matinee Bey (NV Beau Bey x Classique Design). A tall and imposing horse, Mr. Chu presented Matinee Bey at the Longines Global Masters equestrian event in the iconic Birdnest Olympic stadium in Beijing in 2011. Mr. Chu chuckles at the memory, “I said this is a champion from America.” Soon after, Chinese began to import Arabians with two consistent characteristics, they were tall and black. “I guess they thought this is what makes a champion,” he said. “But those horses were not good quality, it took a while but soon other Chinese began to realize there were more important things than how tall and what color the horse was.”

Most recently, he campaigned Canadian Reserve Champion Futurity Colt and U.S. Top Ten Futurity Colt RD Trivago (Bey Ambition x Serafina FM). From my perspective, Mr. Chu is the modern patriarch of the Arabian horse in this country. The Arabian horse in China, however, predates the Japanese importation that captured Mr. Chu’s attention by centuries. The first record of Arabian horses in China was in 681 AD. During the Tang dynasty, Arabian representatives visited China 37 times. During at least seven of these trips, they presented gifts of Arabian horses to the Chinese rulers. In terms of the more modern era, the first information we have is in 1934. Chiang Kai Shek of the Kuomintang government purchased 10 mares and a foal from the British in Iraq. Cui Bu Qing, a subordinate of Kai Shek learned cavalry tactics in Japan. When he returned to China, he advised the Kai Shek government to acquire more Arabians for this purpose. So in 1937, Cui Bu Qing procured another 23 Arabian horses from Iraq. Of course, Kai Shek eventually succumbed to Mao Zedong and the communists, beating a retreat to Taiwan. The descendants of these early imports, however, remain in Qingzhen in southern China for military use and to improve the quality of local horses. I spent a pleasant afternoon in January 2015 with Dr. Zhenshan Wang of the China Stud Book Committee, drinking tea and looking at pictures of these Iraqi imports. Dr. Wang has a particular passion for the history of the Arabian horse in China and is happy to share his knowledge and information that he has collected. For his part of this history, he is working to establish the first Chinese Arabian studbook recognized by WAHO, and I think China is lucky to have him. China is also fortunate to have Tao Li and her husband Da Lai whom I initially met at Mr. Chu’s Yihe farm in 2014. The next time I ran into them was in 2015 when they wanted a picture with Debbie and me at the Beijing Turf and Equestrian Association’s annual meeting. The duo trains for Mr. Chu, and when I saw them sit a horse, I was blown away with their abilities. I shouldn’t have been. They are from Inner Mongolia and the blood that courses through their veins conquered most of the known world in the 13th

Tao Li, left and bottom, and her husband Da Lai, train Arabians, as well as Quarter Horses, at Mr. Chuâ&amp;#x20AC;&amp;#x2122;s Yihe Farm in Bejing. The couple has also competed in and won numerous pole bending and barrel racing competitions.

century on horseback. In addition to training the Yihe Arabians, they also compete on the farmâ&amp;#x20AC;&amp;#x2122;s Quarter Horses. The couple has won numerous competitions in pole bending and barrel racing in China; they can be considered the best in the country. They are now turning their attention to Arabian horses, and when China eventually has performance shows, expect this couple to be the ones to beat. They are already well known in China, and Tao Li has all the attributes to be a social media sensation anywhere in the world: beautiful and talented. Her WeChat channel (Chinese social media) boasts over one million followers. I am asked often about China as I travel around the world to shows. Mostly, people want to know if it will really be a legitimate part of the global

Arabian industry like Europe, the Americas, and the Middle East are. My answer has become succinct; it is not if, but when. The modern reality with regards to China is simply numbers, a population of 1.5 billion, 75 percent of which will be considered middle class next year. By contrast, just 4 percent were considered middle class in 2000. China has more billionaires than any country on earth, almost 30 percent more than the next country, the United States. The two most populous cities in the world, Shanghai and Beijing, are Chinese. But so are four more in the top 15: Tianjin, Shenzen, Guangzhou, and Wuhan. No U.S. or European city makes the list. There is also further evidence that the interest in equine activities is rapidly gaining pace. Consider that in the Shanghai area, where there were 1,000

riding clubs in 2016, the number has tripled in just three years. One club I visited had 1,000 members — if you consider the average membership to be half that, it would still mean there are 1.5 million active horse enthusiasts in Shanghai alone! Since 2016, the Longines Global Champions Tour has made Shanghai one of their stops. It should be not surprising that the most popular equestrian discipline is jumping. Can you imagine what interest a world class Arabian horse show could garner? This is especially true given there is already interest in Arabian horses. In 2014, the President of Kyrgyzstan gave a Polishbred Arabian stallion to Chinese President Xi. Being owned by the President of China, the stallion has received a lot of attention. But when Sheikh Mohammed bin Zayed, the Crown Prince of Abu Dhabi, gave President Xi the World Champion Stallion Gallardo J (Emerald J x Gomera J), almost every Chinese, all 1.5 billion, knew what an Arabian horse was. This isn’t to say that China is easy, ever. At times, doing business there is completely frustrating with a Wild West cast of characters. There are shysters and outright crooks, but there are in every corner of this

globe. That said, I have also made lifelong friends I would trust with my life and have. My former athletes, my Beijing partner Jie Yang, and her husband are just some that embody the best of China. There remain challenges too. A couple years ago I brought over hundreds of doses of West Nile Vaccinations (it is unavailable in China) for my friend Yushi Peng, an equine vet in Beijing, in exchange for some translation help. Yushi, who can swear so well in English it makes my sides hurt from laughing, tells me stories about colic surgery in the pasture because of no access to a clinic. There is one, repeat one, equine clinic north of Hong Kong. North of Hong Kong is essentially all of China. It is not a profession for the faint of heart, and I admire her toughness. I spent most of last May in China with the Arabian Insider crew filming a documentary. It was a first attempt to begin to tell the story of the Arabian horse in China and meet some of the players that are and will shape this emerging industry. Arabian Horse World, with whom I have had a long association, is kind enough to host this series. If you love the Arabian horse, it should be of interest to you, because eventually China will have an impact on us all.

What in the World: The Rise of China

What in the World: The Rise of China, by Jeffrey Wintersteen Published in the April 2019 issue of Arabian Horse World.