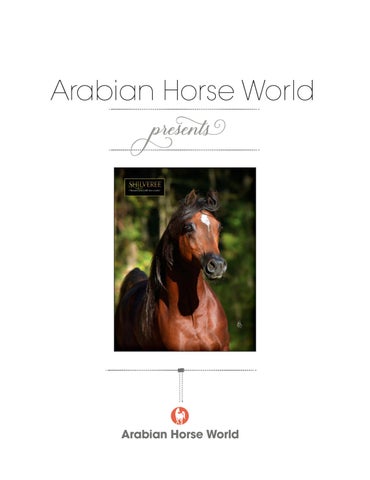 A Reflection of 40 years of Southern Heritage Farm Breeding

r. Ed Davidson, SHF Hale Bop (SHF a mixed Southern Whiz x Cory practice Comet), Legion of Supreme veterinarian in Honor and Legion of Spartanburg, South Supreme Merit winner, has Carolina, has bred over won Sport Horse In-hand 50 horses in his breeding National Champion gelding career spanning 40 years. and too many under saddle The young stallion SHF classes to count. Shilveree (*Besson Carol Dr. Davidson has x SHF Miss Scarlet) thoughtfully incorporated is the culmination of blood from some of the many years of expert breed’s most famous breeding that started stallions, including with the stallion SHF *Fairview Klassique, Padrons Southern Whiz (Gazesel Psyche, Gai Monarch, *Piaff, x HV Baroness) a Legion and *Marwan Al Shaqab. of Honor winner, in Stallions from the Southern 1983. Whiz, dubbed Heritage Farm breeding azesel x HV Baroness) SHF SOUTHERN WHIZ (G “the exotic one,” was program have been used a fabulous sire known all over the world, and for passing on his extreme type and quality. His most have contributed type and movement for Welsh pony notable offspring was SHF Pearlie Mae (x Citrona), who breeders, as well. was sold to Shirley Watts of Halsdon Stud and named But it was his use of the incomparable stallion *Besson World Champion Mare in 1996. Carol that resulted in the newest excitement at the farm Dr. Davidson has bred several horses with National — SHF Shilveree. In partnership with long-time friend titles, including SHF Souths Choice Legion of Honor and breeder Denise Shannon, Dr. Davidson is looking (SHF Southern Whiz x Ultimate Choice), 2002 U.S. forward to seeing his breeding gracing the show ring Top Ten Mare, SHF Billy Bob (full brother to Pearlie once again — this time with a stallion of unparalleled Mae), who went to England and then was shown here excellence. “Guided by the talented Austin Colangelo at in the U.S.; SHF Final Oorah (Semper Fie x SHF Final Stella Bella Arabians, we look forward to presenting SHF Pearlz), who has won with a youth owner at all levels Shilveree to the world during this, the 40th anniversary of competition; and SHF Miss Scarlet (Gai Monarch x year of Southern Heritage Farms,” says Dr. Davidson. LC Psassafras by Padrons Psyche), 2010 U.S. National “This young stallion embodies so much of what I desire Champion Mare AOTH and Legion of Honor winner. in an Arabian. Number one is beauty. This is followed

closely by the Arabian attitude, exemplified by tail carriage. And, of course, the fact that they can be your best friend.” The Southern Heritage Farm program, founded in 1979, has its roots in southern rock, believe it or not. “In my first year out of veterinary school, I was working for the Wolfe family in North Carolina, where Eric Wolfe was the trainer,” says Dr. Davidson. “He was campaigning the stallion Hi Fashion Imperial (Ferzon x Ala-Arabi Razali). When Eric brought him out, I thought he was the most beautiful Arabian stallion I had ever seen. He looked like an alabaster sculpture. I was immediately smitten with the breed. The next year I returned to my home in Spartanburg, South Carolina. One of my clients there was Toy Caldwell of the Marshall Tucker Band. Toy also had one of those beautiful grey Arabian stallions — Gazesel (Gazon x Gesel by Genii). A year later, Gazesel developed parasitic lesions on the end of his penis. I was the only one that could treat him, and I’d go to the farm and treat him every day. You rarely see this disease anymore with the use of Ivermectin products. “Sometime later, tragedy beset the Caldwell family with the loss of their trainer, Tim, and Toy’s brother Tommy. Both were killed in auto accidents within a

month of each other,” continues Dr. Davidson. “Toy decided to disperse his horses, and I decided I wanted a mare, so I put down a deposit on HV Baroness, a line-bred Azraff mare by Lea Baron. While I was at the farm one night treating Gazesel, Toy came down to the barn and asked if I would like to have the stallion. I was speechless. I was quick to reply that I would be honored to have him. Thus, my beginning as an Arabian owner came in the true Bedouin way … as legend says that the true Arabian should be a gift.” The following year, the mating of Gazesel and HV Baroness produced Dr. Davidson’s herd sire, SHF Southern Whiz. “Arabian horses have allowed me to tour the world, visiting places and meeting interesting people I would have never known,” he continues. “The Egyptian Nationals in Cairo, British Nationals in Malvern, European Championship in Vichy, France, World Championship in Paris, All Nations Cup in Aachen, Germany, the Polish State Studs, WAHO in Oman, Qatar, Bahrain … these are just some of the international places I’ve seen, thanks to the Arabian. Showing in the states, we have a show family, and they have been so good to me. “My life has truly been blessed by my connection to the Arabian horse.”