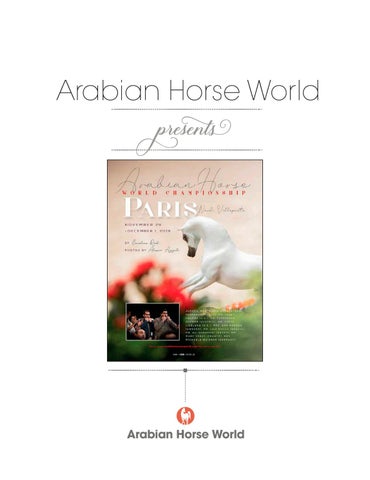 nce again The Arabian Horse World Championship was hosted within the vast Parc d’Expositions, but sadly this year the Paris Horse Show, which usually runs

concurrently, was following a week later. Tens of thousands of horse lovers attend the Paris Horse Show, which has fantastic displays of horsemanship and gala evenings as well as a simply huge equestrian trade fair! This benefited our own show in two ways — it was always nice to think that the Arabian horse would get some new fans venturing into our little bubble as they came through to spectate and it was also very nice for us to visit the stands! Selling everything from rope halters to Swarovski encrusted breeches to trailers and stables, we were deprived of this horsey heaven this year, although our

Christmas tree at Miles Buckley’s. The new timetable is perfect, as the

feet, cramped in shoes nowhere near resembling the shape of

show doesn’t start until the afternoon,

a foot and teetering on unusually high heels, were extremely

giving everyone the chance to ‘settle in,’

meet and greet and study the catalogue.

Back to the show and as is becoming the norm, wandering

Also as is the norm, most of the

amongst the fantastically decorated booths takes longer and

plenty of prosecco as ever at the Schoukens booth. And just to

remind us that it’s December soon, the jolly sight of a brightly lit

ever tinier muzzles, though coupled with

perhaps less athleticism and bold charisma … but I like to think (and fervently hope) that it won’t be long before these attributes, that were an important part of Arabian ‘Type,’ get higher priority again in future breeding programs. The first class of yearling fillies treated us to entries that were some of the most illustrious prizewinning show girls we had ever seen, so of course for some the results had to be their lowest so far in their short careers — yet this was no mean feat seeing the immense quality of those at the

Gold Champion Junior Colt EKS Farajj (Ibn Farid x EKS Bint Helwah), owned by Al Khashab Stud, Kuwait. top — examples of this were Al Baydaa’s super bay My Vision AA (by Jyar Meia Lua and out of the legendary The Vision HG), who was Gold in Menton, scoring two 20s for Head and Neck here, yet only managing fifth; Al Jawaher’s FAM Donatella (Dominic M x D Crystal Moon), Gold in Abu Dhabi, fourth here; my own little favorite from last year’s Ode to Majorca visit: Al Shiraa’s Vilma BV (RFI Farid x Vera BV) third; All Nations Cup Gold HDM Bella Ciao — perhaps a little jaded, although still managing six 20s for Head and Neck (and so awarded Best Head) — was second and the as yet unshown (yearlings don’t need to qualify for Paris) Mona Lisa Aljassimya (Equator x Minwah), despite only getting one 20, scoring highly enough in every section to top them all with a healthy 92.21 The second class was also one of quality, and was also notable for having two full sisters compete — the tall, stunning chestnut D Shamkhah and bay D Shu’alah, by FA El Rasheem and out of FT Shaella, D Shamkhah taking the win with a whopping eleven 20s for Type and A H W > 141 < 0 1 / 0 2 . 2 0

Head and Neck, giving her the high score of 93 (and Best Head),

in the Championship ahead of

and her perhaps less exotic, but better-moving sister getting sixth,

again behind some illustrious company, which included Al Arab

And mention should also be

nearly slipped under the radar, but the more one looked at her the

second place score of 92.7. The Championships saw the wonderful

may have a little less face than

D Shamkhah get the Gold (six out of the eight judges chose her),

her counterparts, but boy did

she entertain us spectators,

The Junior Fillies also had some superb entries of course, Al

smiles breaking out as well as

spontaneous applause as she

powered around the huge arena

to earn a deserved full set of

Valentine MI) Gold at Dubai and Sharjah, above her in third.

However, it was another descendant of the incredible FT Shaella

back great memories of the days

when the ring was full of athletic

Rasheem x D Shahla out of FT Shaella). And yet D Shihanah was

The first class of Senior

(AJ Portofino x Ava Maryia), a stunning filly all round whom I had

future, and had been surprised when she didn’t feature highly in

to Platinum and double World

the championships back then. Fresh from Gold this year at the All

Nations Cup Algamra seems to have it all in spades — beautiful face,

win with a mighty stand-up similar

for Type, Head and Neck and Movement and earning good body

to her full brother’s and a heavy

20s for Type. However, a close

Much to her connections’ great delight, the second class of the

Enezja) her of the most beautiful, sculpted face (she won Best Head)

(Shanghai EA x Wilda), only a half

that perhaps in the past had been a tad overlooked, but which was

point down on Type, but a better

mover with four 20s and she was

closely followed by Al Khashab Stud’s dear Malikat Al Moluk (Mameluk x Asalat Al Hala) who as a look-at-me youngster had done so well and had now come strongly back to form. How fortunes can change! Former World Champion and seasoned campaigner Pustynia Kahila (Kahil Al Shaqab x Pustynna Malwa), Silver at Aachen a few months earlier, didn’t feel it today and came ninth, albeit to some very good mares, in fact one place above her was the Michałów moving machine Poganinka (El Omari x Pentra) sadly a little more old fashioned in type for these days, but boy did she light up the arena with her movement, getting all 20s and Highest Moving Female along the way. However, it was the second

the outcome of the current top

two queens of the ring — NAF

Gold) and Maisa rewarded with Best Straight Egyptian Female. The yearling colts had a plethora of bays entered too, with the

equal marks for Type too, but

although Maisa outpointed her

boy looked magnificent in his stand up, out-posing the others by a mile to

rival on Body and Topline, Noft

took the win by dint of having

Dubai Stud had a fair few entered, and as expected very nice they

were too, taking second (and Best Head) in the first class with D Shakhat

included a 20 and this is the

and then first and second in the next. Both colts (bay) in the latter class

order they remained in for the

were by the latest super-sire FA El Rasheem, as were two of the other

fantastic five 20s for Movement, though it has to be said that he was

(although both getting a vote for

(x D Mazaia) was more typical of his sire; a very

pretty, good-bodied colt, but not as athletic as

his winning half-brother and later these two went

The second class was won by another favorite of

on to be Silver and Bronze on Sunday, ensuring

mine that I’d tipped for the top as a yearling, again

FA El Rasheem was awarded Best Sire of the

Owner Breeder. Also it has to be mentioned that

Baby Maria). This gorgeous grey has a lovely

Dubai Stud’s get won four (a third!) of the Best

up the huge arena, getting duly rewarded with

a complete set of 20s for Movement, as well as

three 20s for Type along the way. HL El Ganador

had been Silver to EKS Farajj at Aachen and now

It was nice to see that the junior colts had

one wondered if the spots would be reversed

some really charismatic boys at the top, and

here. And in second place we had a Greek-owned

for sure Elkasun Arabians (EKS) know how to

The championships are under the new rules

Helwah) was on fire to take the win over another

where the Gold is chosen not by points, but by the

greatest number of actual votes for Gold, whereas

Silver and Bronze are still chosen by their Championship points total (four for Gold; two for Silver and one for Bronze) and so it was that EKS Farajj took Gold, as although he and HL El Ganador both had four votes each for Gold, EKS Farajj had more votes for Silver, thereby earning more points to take the Championship. D Ibn Rasheem was awarded Bronze. As ever, the Senior Male section promised us much, with Al Saqran’s superb Sundown KA (QR Marc x L Serenella), Gold at Dubai and Sharjah, such a balanced, complete horse, earning ten 20s, 18.5s for Body, the highest leg score of the show; plus the titles Highest Score of the Show and Best Head with a massive 93.57. Second to Sundown KA was Al Shahania’s EKS Mansour (EKS Alihandro x EKS Phateena) another very flamboyant grey from Elkasun. The second class of stallions saw the much anticipated return of Menton and Aachen Gold and previous reserve World Champion Shanghai EA (WH Justice x Salymah EA), surely the ultimate in type, this snow white, frothy boy wowed us all with his beauty to earn the incredible (and deserved) score of all 20s for Type and all 20s for Head and Neck, plus of course, Best Head. Was this to be his year? Second was the superb seasoned campaigner El Farida Stud’s white World Champion straight Egyptian Adham Sakr (Imperial Madori x Ameera Sakr) who always puts on such a great show and was award Best Straight Egyptian Male. And in the final championship of the show, Sundown KA switched it on, as he does every single time, unfailingly, to take the Gold, with Shanghai EA

As is the norm, most of the youngsters shown here now are über-refined, bay, with incredibly exotic, exquisite faces, neat little heads, and...

As is the norm, most of the youngsters shown here now are über-refined, bay, with incredibly exotic, exquisite faces, neat little heads, and...