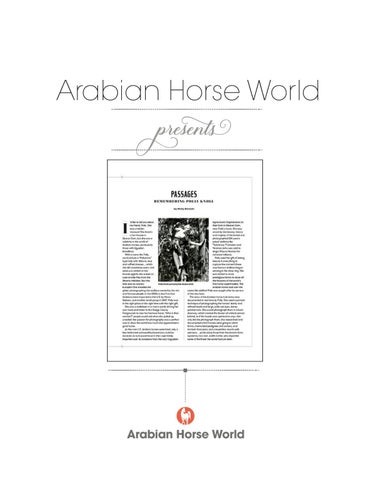 ’d like to tell you about Agricultural Organization) to my friend, Polly. She their farm in Beaver Dam, was a hidden near Polly’s home. She was treasure! She lived in struck by the beauty, history a farmhouse in and majesty of the breed and Beaver Dam, but she was a photographed Bill Lowe’s celebrity in the world of prized stallions like Arabian horses, particularly *Tuhotmos, *Farazdac and those with Egyptian *Aramas (who was sold to bloodlines. singer Wayne Newton for With a name like Polly, rumored millions). you’d picture a “Pollyanna” Polly used her gift of seeing type lady with ribbons, lace beauty in everything to and ruffled dresses ... which capture the moment these she did sometimes wear, and now famous stallions began when you added on her winning in the show ring. She blonde pigtails she looked as was invited to more cute as Ellie May from the prestigious farms to show off Beverly Hillbillies. But this the features of the world’s Polly Knoll pursuing the elusive shot. lady was no country first horse supermodels. The bumpkin! She traveled the Arabian horse took over the globe, photographing the stallions owned by the rich states like wildfire! Polly was sought after by owners and famous people. In the 1930s it was first that of the very best. Arabians were imported to the U.S. by Henry The story of the Arabian horse in America was Babson, and another small group in 1947. Polly was documented in real time by Polly. She used a portrait in the right place at the right time with the right gift. technique of photographing the horses’ dainty and She was a trailblazer in a man’s world, driving her refined heads and large, wide-set eyes, dainty own truck and trailer to the Dodge County pointed ears. She would photograph them in a barn Fairgrounds to race her harness horse. “Who is that doorway, which created the illusion of a black canvas woman?” people would ask when she pulled up, behind, as if the heads were painted on onyx. Not unaided. Her passion for photography was a perfect only did she photograph them, she researched and way to show the world how much she appreciated a documented which horses were going to which good horse. farms, memorized pedigrees and owners, and As the rare U.S. Arabian horses were bred, only a tracked champions and competition results with few dedicated and wealthy Americans could be precision ... particularly those from the Ansata farm involved. As luck would have it, the Lowe family owned by Don and Judith Forbis, who imported imported over 40 Arabians from the EAO (Egyptian some of the finest the world had yet seen.

Gleannloch Farms, managed by Tom and Rhita McNair, bred some of the most legendary horses who are still foundations of breeding today. *Morafic’s portrait made Polly famous on an international level! She was there to photograph their fiery *Sakr, who would show off the natural ‘floating trot’ of the Arabian breed like no other! As Tom would fly around the showring on his back, the crowd would chant “Sick ‘em Sakr!” Their success drew others into the horse world, most famously Patrick Swayze. He and his beloved stallion Tammen were famously photographed by Polly. That poster is still available today, continuing to earn money to fund the Arabian Horse Association Youth Programs. As horses like Moniet el Nefous, *Simeon Shai, Khemosabi, Imperial Imdal and Richter MH rose to fame, Polly was there to photograph it all! I remember as a little girl, my mom would point to the dainty lady in church with an Egyptian-printed scarf, and tell me stories about her, and it was beyond belief! Here in Beaver Dam, she lived? We became friends, as I showed my mom’s *Tuhotmos daughter, and eventually Polly asked me

to go the Egyptian Event with her as her “caddy” so to speak ... carrying her camera equipment and writing in the precious “Notebook” where she documented horse, owner, handler, and breeding for each photograph she took. It was my job to get the horses’ expressions just right by waving scarves or moving in a certain direction to get their eyes to light up just right, and their dainty ears to curve forward in curiosity or excitement. We shared hotel rooms with a friend of hers who had escaped a ruthless husband in Egypt with nothing but her clothes on her back and a wad of her horse’s tail hair in her pocket to remind her of her life back in Egypt. We would dine at Spindletop mansion (where she snuck me a glass of wine!) and listen to stories of these fascinating people, and all of them found Polly even more interesting! “Did you know?” they would ask...Polly did photo shoots of Bedouins in front the pyramids, met a scientist in Brazil who made an amazing discovery about a parasite in the Amazon, photographed for royalty in the desert, and hung from trees inches from stallions, or that she helped friends smuggle

“The aging stallion *ZAGHLOUL (Gassir x Gharbawia), did not really know how to “stand up,” but we found this beautiful and exotic setting where his owner, Doug Marshall, could hold him at the newly compete farm near Barksdale, Texas. We positioned *Zaghloul in front of the magnificent dark gate and stone wall. Next we gave him something to look at, and luckily, he just froze as I fired off a fweshots.”

money by sewing it into their clothing to rescue family overseas? One of my favorites was that she was able to witness a brutal game in Afghanistan called buzkashi. It is played with two teams, and on each end of a desert field a pit is dug. The object of the violent game is to get a disemboweled, beheaded calf into the other team’s pit ... but there are literally no rules! Swords, stabbing and death can happen in this rapid game on the fastest of Arabian horses ... and women are not allowed. Polly, dressed as a man, witnessed this game and snapped a few shots! Everyone knew her. In this little niche of a world, she inspired other photographers to get in the game, by making what she fondly called “pretty pictures” of horses worth more money than I’ll ever make in my lifetime. Everyone wanted to market their stallions, mares and foals, and they needed magazine-quality photographs to make them look like rock stars. The Arabian Horse World was PACKED with Polly photos. She knew how to capture the right shot. Her famous photograph of Ruminaja Ali, stomping and whinnying

KHEMOSABI (Amerigo x Jurneeka), Number 1 All-Time Leading Sire. “This photo of *FARAZDAC (Alaa El Din x Farasha), I will always use for my stationery. I loved all the curves of his face and neck, the fineness of his lower face, the mane not perfectly still; the shapely ears, not forward in the conventional manner, but as an artisit might draw them to indicate his feeling. For the stationery I used a gold line around the oval and with a paintbrush drew his mane out over the oval.”

with mane and tail flying, became the vision to represent the Egyptian Arabian breed as a whole. Because of Polly, I met the princess of Qatar, shook hands with Patrick Swayze at a dance, and blew in the nostrils of *Muscat while a mouse ran around his stall. For my senior pictures, Polly did a photo shoot of me with my best friend, my mom’s mare Sahar Duhomanique (the *Tuhotmos daughter). I had never been on the other side of her camera before and was completely humbly aware of how monumental this occasion was! She made me feel like I belonged with the rich and famous on my little mare. She was a true artist in every sense of the word. Her house was full of her art and art she collected. She would find paintings at auctions and re-frame them, paint around them and hang them next to marble-inlaid wooden pistols and Moroccan bridles she had collected in her travels. She did a pencil drawing of my mare that now hangs in my home

Polly at her exhibition at the Egyptian Event in 2013. below :

next to her portraits. She did minor sculpting of wooden frames, painted and drew, and generally made the world around her more beautiful. She was kind, giving, loving and brilliant. Talking to her was like a history lesson from a female Indiana Jones sometimes! She knew people who raised Arabians in the Alps, along the Amazon, and of course, in the Arabian desert. She knew actors, royalty, researchers, and they all loved and respected her. Polly encouraged me to write a story when I was in middle school where I could win a painting by Karen Kasper of The Black Stallion. I won the national contest, and Karenâ&#x20AC;&#x2122;s painting hangs in my living room. I even received my beautiful bay two-year-old Arabian horse Monieta Amira from Karen. I raised her and she became my sonsâ&#x20AC;&#x2122; horse. I also met Jaleen Hacklander of Hadaya Arabians through Polly. Jaleen gave me my gray Arabian gelding Hadaya el Kadaaar whom I am currently training. Polly stayed humble here in Beaver Dam in her quiet house, letting my toddlers feed her cheerios during church. However, as the Arabian horse world spread to the next generation, the foundation legends remained frozen in time in her images. Calls for her to publish a book came. People wanted a connection to the world in which their parents grew up, when the

pictures in the magazines were real horses ... and they wanted to know more about the tiny but tough lady with the blonde bouffant and big camera. Donations came flooding in, and Polly published a book of some of her favorite photographs, Treasures of a Lifetime: A look into the heart and soul of the true Arabian horse. (I am honored to be in some of its pages). It is a collection of more than 40 years worth of her work. It is still available from The Pyramid Society. Polly was a fascinating lady and a true friend. I am so lucky to have gotten to know her and hear her story first hand. She is a treasure, and what a life she had! I am sure I only know a fraction of her adventures. I will miss her deeply, and I am so proud to be part of some of them.