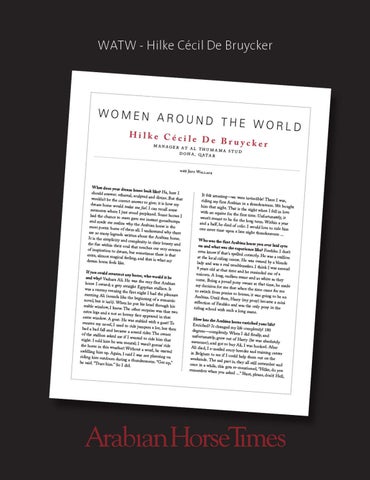 WOMEN AROUND THE WORLD Hilke Cécile De Bruycker M A NAGER AT A L T H U M A M A ST U D D OH A , QATA R

What does your dream horse look like? Ha, here I should answer: ethereal, sculpted and divine. But that wouldn’t be the correct answer to give; it is how my dream horse would make me feel. I can recall some moments where I just stood perplexed. Some horses I had the chance to meet gave me instant goosebumps and made me realize why the Arabian horse is the most poetic horse of them all. I understand why there are so many legends written about the Arabian horse. It is the simplicity and complexity in their beauty and the fire within their soul that touches our very essence of inspiration to dream, but sometimes there is that extra, almost magical feeling, and that is what my dream horse feels like. If you could resurrect any horse, who would it be and why? Vashara Ali. He was the very first Arabian horse I owned; a grey straight Egyptian stallion. It was a stormy evening the first night I had the pleasure meeting Ali (sounds like the beginning of a romantic novel, but it isn’t). When he put his head through his stable window, I knew. The other surprise was that two extra legs and a not so horsey face appeared in that same window. A goat. He was stabled with a goat! To resume my novel, I used to ride jumpers a lot, but then had a bad fall and became a scared rider. The owner of the stallion asked me if I wanted to ride him that night. I told him he was mental; I wasn’t gonna’ ride the horse in this weather! Without a word, he started saddling him up. Again, I said I was not planning on riding him outdoors during a thunderstorm. “Get up,” he said. “Trust him.” So I did.

It felt amazing—we were invincible! There I was, riding my first Arabian in a thunderstorm. We bought him that night. That is the night when I fell in love with an equine for the first time. Unfortunately, it wasn’t meant to be for the long term. Within a year and a half, he died of colic. I would love to ride him one more time upon a late night thunderstorm ... Who was the first Arabian horse you ever laid eyes on and what was the experience like? Freshko. I don’t even know if that’s spelled correctly. He was a stallion at the local riding centre. He was owned by a blonde lady and was a real troublemaker. I think I was around 9 years old at that time and he reminded me of a unicorn. A long, endless mane and as white as they come. Being a proud pony owner at that time, he made my decision for me that when the time came for me to switch from ponies to horses, it was going to be an Arabian. Until then, Harry (my pony) became a mini reflection of Freshko and was the only pony in the riding school with such a long mane. How has the Arabian horse enriched your life? Enriched? It changed my life completely! 180 degrees—completely. When I did finally, and unfortunately, grew out of Harry (he was absolutely awesome), and got to buy Ali, I was hooked. After Ali died, I e-mailed every breeder and training center in Belgium to see if I could help them out on the weekends. The sad part is, they all still remember and once in a while, this gets re-mentioned, “Hilke, do you remember when you asked ...” Shsst, please, don’t! Hell,

H I LKE CÉCI LE DE B RU YCKE R I even interviewed James Swaenepoel for a high school project, which he recalls very well. Either way, fate took me to the Arabian Garden (owned by Philip Looyens and Laura Gosch at the time). I travelled with them during the weekends and that was the beginning of everything. The full turn came with Mayana (BJ Thee Mustafa x Maharani III) and Schoukens Training Center. At that time I was a hotel receptionist. Yes … I know. The hotel closed for renovations for a period of two months, so I needed to work somewhere. Tom Schoukens told me whenever I had the time, I could always come and brush their horses, so I called Tom. I started working there and when the hotel reopened, I went back for a week, only

to return to Schoukens on the next Monday. I’d rather muck stables, brush horses, and drive 60 km on a scooter each day than to stay behind a reception desk. Do you prefer the desert or the ocean? Ocean. What kind of question is this? Is this psychoanalysis? Who have your mentors been in the Arabian horse business? There are many. Every person I meet teaches me something. Name a handful of Arabian mares alive today that make you weak in the knees. Ha! Again … so many. SA Misha Apal, Najdah Al Zobair, Emandoria, Pianissima, El Saghira (every time I lunged her).

Hilke at the Egyptian Event Europe.

WOMEN AROUND THE WORLD

What makes you happy? The first moment between mare and foal. Also, when my horses show well, of course. The sound of coming into the barn in the early morning. Grazing horses in the pasture. Spring. And chocolate, of course. What part of breeding Arabian horses lives deep in your soul? You are continuing a tradition where, in the end, you only play a small part but secretly hope to play a big part. The moment you decide on a certain stallion for a specific mare and wait in excitement to see your work of art eleven months later. Also, it’s not only about the horses, but the people you meet during the process. Some of the greatest individuals I know, I have met because of our mutual passion. I love how breeding Arabians brings so many different people together, striving to the same goal while preserving an ancient tradition. What is your favorite horse destination to travel to? I went to Poland for the first time last year. Without a doubt, the State Studs in Poland. Whoever has been, knows what I am talking about. Even I lack words (which happens very rarely), when I enter those gates. For a well-deserved 2nd place, I have to say my own

country, Belgium. We have some of the best training centres in the world, which house some of the best horses in the world in one place. Let’s not forget our breeders; for such a small country, we made a big impact. What characteristics do you like most about the Arabian horse? Their fire within. The history they reflect. Their ethereal beauty. Their stamina. I don’t know. Every characteristic, I guess. How do you answer this? Why do you love something you love? You just do. Do you have to be told to put on your seatbelt? Back with the psychoanalysis? To answer your question, no. I always put on my seatbelt. Safety first! In regards to design, where do you get your inspiration? In everything. Music. Moments. Poetry. What is it that you actually do-do? I do what I do what needs to be done to do what I do in what I do for that’s the way to do it. Tell us about your role as a graphic designer within Al Thumama. What is your history with that skill? Well, regarding the branding behind Al Thumama, they used

to have a logo as flashy as a green marker. You know that horrible black-light green? Yeah. Exactly. They gave me permission to propose a different theme. I wanted a subtle logo that looked classy and would not take the attention away from our printwork. I’m a Disney girl. Like most girls (even when they say they are not) we secretly hope for a Disney-ish life. Al Thumama is owned by Miss Dana Ali Bin Ali Al Meslemani, a young woman with a vision. Her story reminded me of every little girl’s dream of horses, hence the Disney feel. Inspired by Lana Del Rey’s Once Upon a Dream (yes the complete branding of Al Thumama has been based on a song), we rebranded Al Thumama Stud. And regarding my history with that skill, I just do-do. Who lives behind the blue tinted sunglasses? Tell us about her. What’s up with everyone and my sunglasses? It seems like it has become my trademark. About her ... I am ambitious and dedicated to my goals I have set for my life. I am one of the few lucky ones who made my passion my job. I experience everything with a passion and do not believe in mediocre. I am very eager and straightforward. Most of all, and to put it simply, I am a wandering dreamer which explains why I love what I do. Did the dream life you’re living unfold before your very eyes or have you been a woman on a mission? Well, considering I was working in a hotel and left the job for Schoukens Training Center, it surely wasn’t planned. I never expected to be as lucky as I am today. It has been one hell of a journey. Name a profound turning point in your life that you did not see coming. I must say Schoukens Training Center and Mayana. It was an intertwining of events. Mayana was the big turning point though. I remember seeing her for the first time at the Arabian Garden. I remember asking, “Who is this stallion?” Whereupon Philip replied, “That’s Mayana, and it is a she.” That’s the exact moment I fell in love with her. What a big “she” she was.

About two years later I told Philip I was looking for a horse; I wanted to buy an Arabian mare. He brought me to this small breeder in Germany where

WOMEN AROUND THE WORLD

he offered me another mare. In that same field was a huge, bay Arabian mare. “Oh my God, Philip, that’s Mayana!” Obviously, no other horse stood a chance as my mind was made up. Mayana was way out of budget, so I went to the bank and asked for a loan.

finally found her that perfect new home where I know she will never leave the green fields, and where she will be spending the rest of her very beautiful life in Sweden with Kathleen Olsson. n

With a lot of convincing, I got the loan, and that commitment changed everything. Mayana was mine. Nearly every euro of my salary went straight to her. But at least I had my Mayana. She was the best part of my life. She made me completely change my life and lifestyle and become the person I am today. Because of her, I pursued my dreams of working with horses. Time passed and I moved abroad. She is there and I am not. Sometimes even though it isn’t fair, you have to make decisions for the better. Because of being abroad, I could not spend time with her or enjoy her foals. And for me, that’s just the part that I loved most. I owe her everything, for everything I owe her. With this in mind, I decided to sell Mayana, only to a good home, where she can be given as much love as I wish I could still give her. I