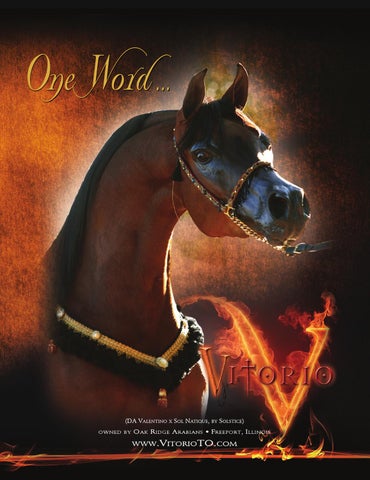 “To HRH Sheikh Ammar, we are so very proud and extend our heartfelt thanks to you for the confidence you have shown in Vitorio by adding his daughter “Bella Vitorio” to your world class collection of special mares at Ajman Stud. We wish you great success with your champion daughter!” —Janey Morse

Thank you to, Dagmar Gordiano, for a tremendous job of training and presenting The Godfather.

"Thank you, Janey, for your friendship and your generosity. We wish you continued success with Vitorio TO, we are so proud to have bred him". —Ed and Maureen Horton

Vitorio TO Secret (Vitorio TO x TN Katiki, by Versace)

Being bred to Vitorio for 2014 foal

Welcomes her half-sister by Vitorio

He was beautiful from the start! “A truly great stallion is much more than a successful show horse. A great stallion must be able to consistently pass on his genetic strengths as a sire, and Vitorio sons and daughters are now proving that he indeed sires Champions!” —Robin Hopkinson

“Vitorio TO is the most fashionable American-bred Arabian horse in the industry today. His breeding potential shines more every year as his babies win in the show ring. Vitorio TO is the ‘now’ genetic source we need in Europe. His babies from 2013 in Poland are a great success.” —Gerald Kurtz

"The quality of Vitorio's first crop of foals and showring successes they have achieved puts Vitorio in line with some of the greatest breeding stallions of the past. Ironically, more than one of those sires appear in his pedigree." — Bob Boggs

"Looking back ... Vitorio captivated my heart—from the moment I laid eyes on him when he was just a yearling—together with Don Morse at a presentation in Scottsdale. Vitorio absolutely knows that he was born to be great ... above and among others. Today, he might very well be on his way to setting a show record greater than any stallion ever has in the Arabian breed, having already garnered five National and International halter championships, all before the age of four.

Vitorio stands tall with huge, dark eyes, and an amazing long neck with perfect shape and delicate throat latch. From what I have seen thus far, Vitorio is a sire of extraordinary merit and even greater potential. I'll go on record today adding to his accolades and his list of accomplishments the term Genetic Giant!" —David Boggs Midwest Training Centre

Thank you, Javan Schaller and Carmin Pinkstaff, for all of your support and fabulous photos..— Janey My sincere thanks and appreciation to Wayne Anderson, for caring and sharing your wonderful talents and neverending pursuit of excellence. You are appreciated! —Janey

“We watched with great excitement, Vitorio TO’s 5 national championships, not only because we love the family which owns him, but for the kind of horse he is. We waited with anticipation, to see his performance as a sire, and not only did he reach our expectations, but surpassed them. Bella Vitorio is a clear example that he can produce outstanding athletic horses with over-the-top neck and shoulders— extreme individuals.” —Fernando and Joaquin de Santibanes