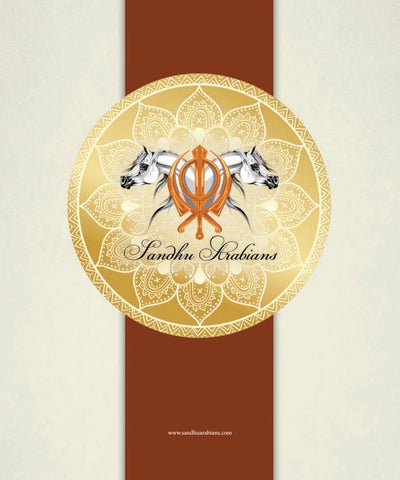 A Family Bound By Passion

Dr. Billa Sandhu is a dynamic man with strong family ties and a passion for Arabian horses. His successful career as a Doctor of Veterinary Medicine is a reflection of his love for all animals, while his flourishing Arabian horse business is a reflection of his family’s heritage. Dr. Sandhu’s father, grandfather, and great grandfather had Marwari horses, a popular breed in their homeland of India. Dr. Sandhu can still recall his first horseback ride at the age of three when his grandfather lifted him up and placed him on his lap and together, they rode a regal Marwari horse. The experience became part of Billa Sandhu’s psyche and his love of horses became a guiding force in his life. Dr. Sandhu’s grandfather was a statesman and a great horseman. He taught Billa how to ride. Growing up, he loved to listen to his grandfather’s stories of the Maharajas and the legends of courageous Sikh warriors. Dr. Sandhu’s father, a University Director of Sports, was also a great influence and motivated him to study veterinary science. Dr. Sandhu’s family immigrated to Canada and he eventually moved to California where he went to school and established his practice, which now includes five clinics. Dr. Sandhu bought his first Arabian pleasure riding horse in 1999. In 2013, while on a family holiday in Arizona, they attended the Scottsdale Arabian Horse Show and a presentation at Midwest Training Centre. During the presentation, Dr. Sandhu’s daughter, Muskaan, saw a mare that captivated her young heart and exclaimed, “Daddy, we need to buy this horse!” Within minutes, Dr. Sandhu also saw the horse of his dreams. Although they were not familiar with pedigrees or breeding Arabian horses, they ended up purchasing both mares. Call it fate, or divine inspiration, because the mares they chose, which were based solely on an inexplicable heart and soul connection, would shape them and their family’s future.

(Above) Balpal Sandhu (Right) The Sandhu family during the 2018 Open House, some traveling all the way from India for the event.

The mare Muskaan picked was Lathifa HEM (HSE Dalakhani x Badiia, by Belmont). Since that time, she has produced an exceptional colt sired by WH Justice. Dr. Sandhuâ&#x20AC;&#x2122;s dream mare was Love Chimes LD (KM Bugatti x Major Primadonna, by DS Major Afire (by Afire Bey V)), a beautiful mare who was in foal to the DA Valentino son, Victorious LD. The following year, Love Chimes LD gave birth to a stunning black filly they named Zennyatta. Not only did Zennyatta become the Scottsdale Champion Yearling Filly and Scottsdale Junior Champion Filly, she also became an international show ring superstar. Today, Zennyatta is among the treasures owned by Albaydaa Stud in Egypt. Love Chimes LD has become a foundation mare for Sandhu Arabians. She has produced some exceptional offspring including two fillies by EKS Alihandro, a colt by Marajj, and a very special colt by Marwan Al Shaqab that is owned in partnership with Dr. Ben Bassichis of Stella Bella Arabians. This year, Love Chimes gave Dr. Sandhu an extraordinary bay colt sired by EKS Alihandro and she was bred back to him for a 2020 foal.

A truly priceless pearl among Dr. Sandhu’s mares is Erylle Meia Lua (WH Justice x Erynne El Perseus, by Perseus El Jamaal). This glorious vision in white was bred by the late Lenita Perroy of Haras Meia Lua. Dr. Sandhu had the pleasure of visiting Lenita at her farm where she shared her history and breeding advice for Erylle. Dr. Sandhu agreed with Lenita about incorporating Marwan Al Shaqab blood into her breeding program. He always believed in Marwan’s son, EKS Alihandro, and in fact, he was the first breeder in America to use the stallion. In 2018, Erylle Meia Lua was bred to Alihandro and this spring she produced a spectacular grey filly, via ET. Dr. Sandhu believes Erylle’s filly is the best foal he has ever bred, and he gives much of the credit for her to Lenita Perroy. The cross was so successful, Erylle Meia Lua was bred back to Alihandro for a 2020 ET foal. Another treasure of Sandhu Arabians is Nadira Of Rohan (RHR Heir Of Marwan x Nala Of Rohan, by Falcon BHF (by Bey Shah)), a beautiful and exquisitely bred mare. Since the Sandhu family acquired her, Nadira has produced offspring by QR Marc, Emerald J, SMA Magic One, Ajman Moniscione, Titan AS, Ever After NA, and Trussardi. Last year, Nadira Of Rohan produced two beautiful Alihandro fillies and this year she is bred to El Tino, which everyone is extremely excited about. Brazil is just one of the many places Dr. Sandhu has travelled in his quest to learn more about Arabian horses and breeding philosophies. He visited the show at Menton, France, followed by Giacomo Capacci’s farm in Cortona, Italy to see EKS Alihandro and the other stallions standing at the farm. Dr. Sandhu also travelled to other parts of Europe including Belgium, where he visited Johanna Ullström’s beautiful farm. Dr. Sandhu, Johanna, and her husband Jeremy, felt an immediate bond, which has become a treasured friendship.

Although always open to learning from others, the breeding decisions at Sandhu Arabians are made by Dr. Sandhu, his daughter Muskaan, and consultant, Rob Langlois. Rob is also a trainer, as well as Dr. Sandhu’s advisor and marketing agent. Rob’s role is to assist Dr. Sandhu in bringing his vision for Sandhu Arabians to life. Their goal is to breed a complete horse. One that is beautiful, with correct conformation, presence and charisma, as well as intelligence and a kind, willing attitude so it can be ridden. These last points are especially critical to Muskaan Sandhu, who is an accomplished equestrian with many championships to her credit. Sandhu Arabians recently acquired the Canadian National Park Horse Champion, Gibson Gitar. No doubt, Muskaan and Gibson Gitar will make a winning team. As with every successful program, Sandhu Arabian’s foundation is built upon an elite group of mares selected for their exquisite phenotype and their powerful genotype. The Sandhu mares are carefully matched with stallions that will complement and enhance their qualities and also contribute their own genetic strengths to ensure that the highest level of quality is achieved in future generations. Among the top sires used in 2018 were EKS Alihandro, Marwan Al Shaqab, El Tino, RFI Farid, and Nofal NK. In 2019, the Sandhu mares were bred to EKS Alihandro, El Tino, SMA Magic One, Royal Asad, Sultan GK, Ever After NA, Mansour AM, and others. Arabian horses are a shared passion for the Sandhu family. Dr. Sandhu and his wife, Raman, who is his biggest supporter, encourage Muskaan and their twin boys, Nihaal and Nishaan, to experience life with their horses and to learn all the important lessons they teach us. Nihaal and Nishaan are now learning to ride, so they can also share that special bond with their horses. Dr. Sandhu and his family are looking forward to hosting their second annual open house in June where they will introduce their beautiful mares and their 2019 foals to their guests. This event promises to be every bit as much fun and exciting as last year with a colorful display of the Sandhu family’s rich cultural heritage and their beautiful horses. This is a day dedicated to family – our family – the family that is formed by our shared passion of the Arabian horse – don’t miss it!