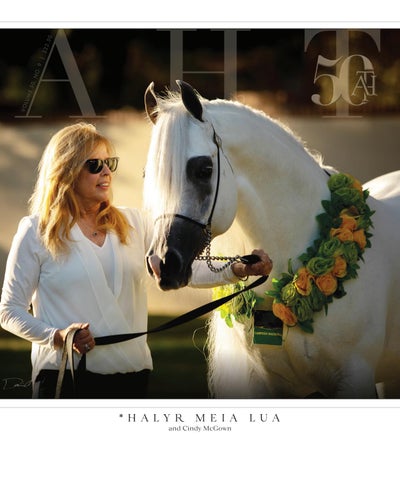 Royal Arabians flourishes through the love and commitment of a tight-knit group of people devoted to the Arabian horse. When asked how horses inspire her, owner Cindy McGown replies, “They are strong, independent, and loyal. They are loving and intelligent. They are incredibly good mothers. I would say they generally encompass the personality traits I strive to have in myself. They inspire me to be more like them.” By all accounts, Cindy has more than met that lofty goal. Along with Mark Davis and daughter Amanda Fraser, she founded Royal in keeping with those aspirations. The result is a universally described atmosphere of “family” at Royal Arabians. In harmony with her strong maternal presence is exceptional business acumen, a combination that client Joe Orr admires. “Cindy is unique,” he states. “In my business experience, which is vast, it’s rare to find someone like Cindy. She’s microscopically honest, and

sometimes that’s tough stuff to hear. She doesn’t put money first; she does what’s right, and that’s a great business attitude. Most people don’t practice business that way; they have short-term goals. Cindy seems to be fully aware—from 25,000 feet! “And Mark’s the same way. They are the heart and soul of Royal Arabians. As much as I love Rodolfo and Travis, it’s Mark and Cindy. They drive the spirit of the place. We also love the club-like atmosphere at Royal. It keeps us involved and grateful to be a part of a very responsible team. It’s comforting, in a way, because they look out for their clients with the same concern that they look out for the entire industry.”

Three years ago, Sylvain Allard and Robyn Andrews were introduced to the Arabian horse by their friend Lee Courtney and the outreach efforts of Cindy and Mark, who are known for their generosity in supporting Scottsdale-area and other charities. At a 2017 benefit for the Heart Association, which they hosted, they donated their homebred Royal Kavant, who was purchased by Sylvain and Robyn. “A friend encouraged us to bid on the gelding,” says Sylvain, who was born and raised on a farm. “That’s how we got introduced to the Arabian horse. I had horses before, but not Arabians. It was for a good cause, and it’s turned out great. We got to know everybody at Royal and Royal Kavant is now starting his career in western pleasure. Cindy and Mark know the business really well and have a great staff. They’ve given

us great advice, the social life is great, and winning helped! We are quite happy with our first three years!” No wonder Sylvain and Robyn are pleased. Their first show filly, OFW Jewel of Marwan, was a 2019 U.S. National Top Ten ABS Yearling Filly, having previously been named the ABWC Silver Supreme Champion Yearling Filly and Reserve Champion Junior Filly at Scottsdale. Just prior to the 2020 Scottsdale show, they added the

Lee Courtney has been with Royal client for ten years, teaming with Cindy when they host events such as those benefitting the American Cancer Society and the American Heart Association, including the one that brought Sylvain Allard into the breed. “Royal has been instrumental in supporting my desire to do more outreach on the charitable side,” Lee relates. “Philanthropy has always been important to me. I’ve been on several boards here in the Valley, and I give kudos to Cindy for supporting the different efforts and embracing bringing new people to the breed. It’s worked out well for the organizations benefitted by events we’ve hosted, and for new people that it has exposed to the breed.” Cindy, Mark, and Amanda have developed a decisionmaking process for deliberating over what

make. “We have multiple foundations within each

business and feel it is

important to give back to that

minutes from Royal Arabians, and I go to see our horses

nearly every day,” Sylvain recounts. “In November 2019, I saw the new arrival and thought she was very special, so I went to talk to Royal trainer Rodolfo Guzzo about her. When he said that she might be for sale, I came back to see her the next morning and made an offer. A week later, she was a surprise Christmas gift for Robyn!”

am approached for a charity in the horse industry, we discuss it and determine if we feel it fits our goals of promoting or protecting the breed in some way.” “I love the way that Royal loves to welcome new people,” Lee enthuses.

At the 2020 Scottsdale show, Mistic was the unanimous winner of both her class and the championship. “Guzzo did a great job training and showing her,” Sylvain commends. “Everyone who saw her was very impressed. One of the other trainers even came to congratulate us, saying, ‘I don’t like losing, but it helps if it is to such a beautiful horse.’ She’s very, very special.”

Cindy explains. “When I

It’s been so much fun. I think we are the perfect farm for that, because we have both performance and halter, whereas some of the other barns are just halter-or performance-focused. Because Royal has both, it’s been fun as a client; there’s something for everyone.” Amanda Fraser is an integral part of Royal Arabians, having grown up with the farm. Now with four children of her own, Amanda deeply

values the familial feeling that exists there. “I consider most of our clients like really close friends,” Amanda relates. “I think it just happens when you put a bunch of good people together. It’s not necessarily by design, it happens that way when everybody has the same goals in mind.” Cindy elaborates, “We don’t do this for money, so it has to be with people we enjoy.” “Something happened this last Scottsdale that made me appreciate our family atmosphere anew,” Amanda confides. Hearing about one of the young girls at the barn on the verge of leaving the horse industry, Amanda and Justin got together to get her a good horse to ride, not willing to see her leave. “She’s an incredibly talented rider,” continues Amanda, “and when she went Scottsdale Reserve Champion after riding the horse only six times; it was a huge win. But the really cool thing was, every single one of our clients had come to support her, and they, along with everybody in the stands, was crying. I thought, ‘Everyone’s heart is invested in this little girl.’ It was a very touching moment. It was wonderful to feel that sense of unity. We had other clients in the class, and not one person was upset that they didn’t win; everyone was just so happy for her. It was a standout moment, not just for the Scottsdale show, but for my whole career in the Arabian industry. She kept saying ‘thank you’ for letting her use the horse and for everything we did. But it was more like, no, thank you, you restored my faith in humanity!” The talents of renowned trainers Rodolfo Guzzo (halter) and Justin Cowden (performance) have fueled Royal Arabians’ emergence as a thriving training center for both halter and performance. Royal-affiliated horses earned seven championships, four reserve championships, and over 40 top ten awards in halter at the 2020 Scottsdale All-Arabian Show. They also garnered four performance championships and five reserve championships in the amateur and professional divisions of hunter pleasure and country English pleasure. Leola Hansen and her husband Tom have enjoyed phenomenal success with Royal, particularly as amateur riders. “Justin is an excellent trainer,” Leola enthuses. “With his help, we’ve picked up some great horses. Since we’ve been with Royal, we’ve won six national championships, five reserves, and I-don’t-know-how-many Scottsdale championships! Tom won the Scottsdale Signature Stallion Hunter Pleasure Maturity ATR this year on TN Khaliente, the same horse that won three national championships in the past two years. It’s a great group at Royal, our horses are pampered, and that’s the way we want it.”

for the Royal Arabians family.

Carol Nierenberg was thrilled with HDF Barcellona’s halter win. “She was presented beautifully by Rodolfo Guzzo, who has been ‘crazy for her’ since he saw her in Brazil,” Carol relates. “Guzzo and Travis Rice call Barcellona ‘The Unicorn’—a singular blend of extreme elegance, correctness, refinement, and Arabian type from nostrils to tailbone. She was the talk of Brazil last summer, where she went Silver Champion Junior Mare—first on judge Michael Byatt’s card—and we’re so pleased that the Scottsdale judges agreed!” Standing at Royal Arabians, Soul of Marwan AS, the 2014 U.S. National Champion Junior Stallion, Champion Yearling Colt and Reserve Champion ABS Yearling Colt, just earned Scottsdale Champion Stallion 7 & Over and Reserve Champion Senior Stallion honors for Arabian Soul Partners, while his daughter, Jasminia AS, was the Scottsdale International Champion Junior Filly and Champion 3-YearOld Mare, making her a favorite for this year’s Nationals. Soul of Marwan’s strong character, energy and intelligence shined at Scottsdale, when put in the hands of master handler Guzzo, showing like he did at Nationals when he was a yearling and won everything. Now he is producing champions, including sons Salazar PA, a Canadian National Reserve Champion, and Royal Mateo, who earned Scottsdale Champion 3 & 4-Year-Old Stallion AAOTH honors with his owner Danny Pagan. Also standing at Royal Arabians is one of their newer acquisitions, 2013 Brazilian National Gold Champion Junior Colt, Halyr Meia Lua. He brings a balanced pedigree of classic and contemporary lines packed with elegance and Arabian type, being a son of 2004 European Reserve Champion Stallion, Ajman Moniscione, and Halya De Jylbert, by Jylbert De Wiec. Guzzo describes Halyr Meia Lua as a stallion “destined for greatness,” who “thinks the whole universe is his,” and Royal’s manager of sales, Travis Rice, calls him “the perfect outcross,” who is “existing loudly with a purpose.” Halyr Meia Lua is standing to a book full of exceptional mares owned by some of the world’s finest breeders. And from the consistent excellence of his foal crops to date, the stallion has every right to their confidence. 2020 Scottsdale show-goers witnessed the only two Halyr Meia Lua offspring presented there, RD Halyra and Royal Theodosia, finishing first and second in the 2-Year-Old Fillies AAOTH class. RD Halyra went on to earn the Scottsdale Champion Junior Filly AAOTH title, with owner/breeder Murray Popplewell on the lead. “I believe he will breed well to any mare,” says Cindy. “He will bring his type, ears, and eyes to the resulting foal. He has the best ears I’ve ever seen on any Arabian horse and big, beautiful, dark eyes. He always brings those traits to the resulting offspring. My favorite of ours is probably Royal Fantazia, as she is three generations of Royal Arabians breeding. Fantazia is out of RA Princess Jammal, who is out of our foundation mare, Maggie Mae PGA. Of course, Bianca AL and Andrea AL are beautiful as well. They are both out of FA El Shawan daughters.” From humble beginnings, and anchored to core values, Cindy McGown and Mark Davis have developed Royal Arabians into a worldwide influencer of the industry, and Cindy is optimistic about the future. “We have endless goals with the Royal Team. That’s what makes this exciting and keeps us going when we are having good days, weeks, or months.” In times of unprecedented challenges and tumultuous events, people take comfort in the constants in their lives. For members of the Arabian horse community, it is the horses, the people, and the places like Royal Arabians that fill that anchoring role of family. ■