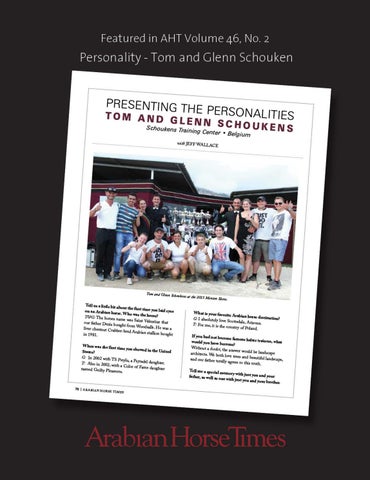 Tom and Glenn Schoukens at the 2015 Menton Show.

Tell us a little bit about the first time you laid eyes on an Arabian horse. Who was the horse? T&amp;G: The horses name was Saint Valentine that our father Denis bought from Woodsalls. He was a liver chestnut Crabbet-bred Arabian stallion bought in 1981. When was the first time you showed in the United States? G: In 2002 with TS Pstyln, a Psytadel daughter. T: Also in 2002, with a Color of Fame daughter named Guilty Pleasures.

What is your favorite Arabian horse destination? G: I absolutely love Scottsdale, Arizona. T: For me, it is the country of Poland. If you had not become famous halter trainers, what would you have become? Without a doubt, the answer would be landscape architects. We both love trees and beautiful landscape, and our father totally agrees to this truth. Tell me a special memory with just you and your father, as well as one with just you and your brother.

T: In 2001 we went to the Scottsdale show, and from there we drove to Las Vegas; a big group of us. My wife Cathy says it was a very “Thelma and Louise”-type road trip. We visited Wayne Newton Arabians and saw two very memorable horses for both Glenn and I—Arn-ette Perlane and WN Fawn Obsession. It was a very memorable trip for the whole family. Do you have any other siblings? If yes, do they also love the horses? G: Yes, we have a younger brother, Kim. My father has two interests, computers and Arabian horses. Tom and I took after his interest in the Arabian horse and Kim took after his interest of computers. He lives in Brussels and is very involved in the computer industry. How has the internet and the Middle East in your mind, changed the Arabian breed forever? T: The Middle East is now where most of the great Arabians of our time live. They have also become, and are continuing to become, some of our best breeders in the world. Also, the internet has made us one big happy family around the world. Though it comes with its pros and cons, which we are all aware of at this point, it has globalized the breed. If you could resurrect any two horses, who would they be and why? T&amp;G: We saw Arn-ette Perlaine the year before he died; a revolutionary horse. He was such a typey horse, way ahead of his time. Also, *El Shaklan, WN Fawn Obsession and ZT Shak Jamara. Lastly would be Karmaa, the foundation mare of Mulawa; for sure one of the most beautiful mares we have ever seen. And even though he is still living, we really appreciate Ashhal Al Rayyan. It is a shame that Ashhal did not breed more outside mares throughout his entire life. Who have your mentors been in the Arabian breed? T&amp;G: First and foremost is our dad, Denis, for introducing us to the Arabian horse and taking us along on so many of his trips to horse shows and farm visits. Fernando Poli taught us the first steps of schooling a horse and how to keep our place clean.

He was actually a very strict and wonderful teacher. He also started us on developing a deep appreciation on the importance of conditioning our horses. We also spent a month working with Fernando while he was at La Movida, when we were 16 and 14 years old. Then came the influence of Bob Boggs which was equally as important to us in many ways. We have always used training centers like Midwest Station I as a measuring stick; they are just one of the best. What does your dream horse look like? G: It would have the neck of RH Triana coupled with a ton of attitude, as that seems often to be 90% of the horse anyway. T: It would be the perfect blend of SA Misha Apal with Najdah Al Zobair and Excalibur EA, with a layer of Jasmeenah on top. When you look at mares such as Pinga who possess such a rich and deep history, what goes through your mind? T&amp;G: When Pinga and El Dorada arrived at our farm, it was, of course, very exciting. They represent so much importance and history to our breed. Both mares are simply breathtaking. Yet it is important

T: Off course, any of my big wins were very emotional to me, my first World Champion title with Najdah Al Zobair, and my first All Nations Cup Champion title with Pandoraah will always remain very special. Though it is not only this that can bring tears to your eyes, sometimes it can be when you walk through the fields or late at night through the barn. Sometimes you only realize the true beauty of some of them. We were fortunate to have some of the most amazing horses in the world passing through our barn. Tom and Glenn Schoukens

for us to say that all horses are treated the same at Schoukens Training Center. What two or three changes would you like to see happen for the betterment of this breed during your lifetime? T: I would like to see breeders become more serious about widening our gene pool. It seems that it is a bit too small today, and that concerns us. Which Arabian horse’s beauty touched you so deeply that it brought tears to your eyes?

How do you feel listening to people complain about different major horse shows? G: People complain about every horse show. I know they are making changes this year to Aachen, but for us, Aachen is always a wonderful show no matter what. What are your thoughts about breeding to the fashionable stallions of years ago via their frozen semen? T: In terms of frozen semen to dead stallions, I really prefer to only breed forward. However, my exception would be Padrons Psyche—I would always breed to him whether living or gone. ■