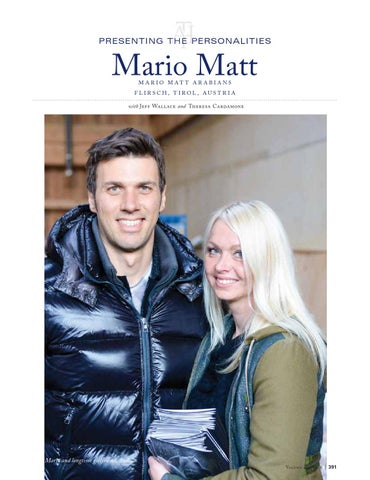 FLIRSCH, TIROL, AUSTR I A

with Jeff Wallace and Theresa Cardamone

Let’s be frank right out of the gate; it seems you are successful in everything you do. Is there anything that you take on that you are not great at? It’s hard for me to say that about myself, maybe you have to ask another person to get a better answer. My main job has been skiing for the last 20 years. I was lucky enough to have such a talent and be successful. From when I was a child, I would say that when I start something, or something really interests me, I really try my best and put all I have in it to be successful. One slogan for me is, “No pain, no gain.” Do your approaches to skiing and breeding horses differ, or are they similar? I always set goals. Every person, I think, needs goals to achieve. I work really hard toward these goals. For skiing I prefer this, and it’s the same with the horses. At home, we talk a lot about horses. We try to find the right stallions and most importantly, ensure that they have a good life here. We are open-minded and try to see a lot of horses. It is very important to go outside your program, to see the best; only then can you improve. It was the same for skiing; if you just train alone, or train with other competition that is lower than you, you can’t improve. You need to compete against the best in the world and then you can improve. In skiing, when I had a really good run, it was proven with the time; no one had to decide what it was. At the finish, it was clear. It is different with horse shows. Is there an adrenaline rush factor to being a breeder as well as a skier? Remember back to the moment you knew you had just won that Olympic gold medal. Tell us a little bit about what that was like. The feeling, of course, when I achieved the gold medal, or the first place, is indescribable. It is such an amazing feeling. I worked hard, and have the memories of that hard work. And then, the national anthem is played just for you—it’s incredible.

Mario wins Gold in Sochi at the 2014 Winter Olympics in Alpine Skiing, Men&#39;s Slalom. Did you dream of being a professional snow skier and having horses as a child? My parents put me on skis when I was only two years old. My first competition— it was a small competition—was in my village when I was maybe three years old. I grew up skiing, and step-by-step, got better and better. With horses, that started also when I was a little child. My dream was always to own a horse. Every time I drove with my parents, if I saw horses at the side of the street, I made them stop so I could go to them and touch them. Yes, it was always the dream, and years later, I pursued this dream. Who was the first Arabian horse you ever laid eyes on? Did you immediately fall in love? It was in Verona and I walked through the fairgrounds and was suddenly where the European Championships were 394 | A R A BI A N HOR SE T I MES

being held. I never saw an Arabian horse show before, and that was the first time I saw Arabian horses. I was totally impressed and fell in love with them. It was actually during the break; there was a liberty show. I saw the Arabian horse at liberty and it was totally amazing, because as we all know, the Arabian breed is completely different from all the other breeds. What year did you buy your first Arabian horse? It was the same year. Over the wintertime I was really successful in skiing. I was the leader in the championship, and then I broke my shoulder in an accident skiing. And then, of course, I had enough time. I was just fresh from the European Championship and seeing those horses, so I started going around, visiting some farms, and the same year, I bought my first Arabian horse; it was in 2002.

Did you know from the very beginning that you wanted to be a breeder? No, actually at this time, I was riding them and driving. In 2002, I went to another show in Wels, Austria, and I met Ferdinand Huemer from La Movida. He invited me to his place and I asked him a lot of stupid questions right there at the table, and he told me everything. I bought my first mare, a Fame VF daughter bred by Doug Dahmen. She’s still alive; she’s 23 now, and was one of my best producing mares. It was a couple of years ago that I visited Lenita Perroy in Brazil and there was this little filly, the mother of Niyama that I have now; she was just seven months old. She was just my kind of mare, with extreme quality everywhere. She was very complete with a good body. I also saw her mother and grandmother, which I love; going to another farm and seeing the parents and grandparents and the line of quality. So I decided to buy the filly and she did everything for me. She gave me Niyama to continue the line, and she keeps getting better and better. From spring until now, she has improved so much in the face. With this line, it’s really, really nice to have that. They surprise you so much when you don’t see them for a while, and they have

improved more and just keep getting more beautiful. It’s a good thing to know that it’s not going in the other direction! What does your ideal horse look like? MM Niyama is awfully close to ideal. No horse is ideal. Every horse has mistakes. But for sure, Niyama has many things that I really like, especially her charisma from the Jamaal line and also from WH Justice himself. I think in two or three years, she will be completely white. But then there is WH Justice. I have seen him many, many times, loose in the arena, and every time I get goosebumps. Not many horses are able to do this to me. Name three mares and three stallions, dead or alive, that you’ve seen during your lifetime and just fell head over heels for. Ali Jamaal Pianissima Marwan Al Shaqab Venetzia WH Justice Jullye El Ludjin You have another famous horse, M.M. Esplendida. Tell us what is up with her? She is at home. M.M. Esplendida is for sure one of our best horses; she is Volume 46, No. 6 | 395

A surprise waiting for Mario when returning home from the Olympic Games.

really amazing. I was really lucky that I kept her. We had high hopes at one time of selling her, but I’m really happy we didn’t. She is in foal now to FA El Rasheem, and I think it will be the only El Rasheem baby in Europe. She is due in March of 2016. How does the Arabian horse enrich your life? The horses enrich my life every day. Starting in the morning, when they go out in the pasture, the foals are playing. I do a lot of riding inside the arena or on trail rides outside. Of course, we have many, many moments because we do everything ourselves. We are in the stable every getting the work done. I train my horses, start them, break colts, and teach them to halter—everything. What mentors have you had? As mentioned above, when I started, I first came to La Movida, to Ferdinand Huemer. We have a great friendship. I learned a lot in the beginning from him, like what an Arabian should 396 | A R A BI A N HOR SE T I MES

possible. Quality-wise, I know pretty quick how good the horse is, but for us it is really, really important that the horse finds a good home and the new owner takes good care of it. This is a normal thing. I am there when the mare gets bred, I pull the baby out, I help the baby stand up, and a few months later I teach them the halter.

look like and how to breed to get the good things. I always had a good eye for animals. When I went to the shows, I could choose for every class the top two or three. I tried in every show to learn that way. I also met Heinz Stockle and we get together at every horse show. He always says what he thinks. I like people like this and I’m the same; always straight about, and very true to what I think. In this business, the horse business, it’s not always so. When people come to my farm to see my horses, I always say, “Tell me what you really think, not just what the owner might want to hear.” I like when everyone is honest and says what they think. And nobody gets hurt. I think it is important to be true. When it comes to foal crops at Mario Matt Arabians, how do you decide who stays and who goes? It’s not easy. I want to keep every horse, but I know that is not

Is there a special moment that you have experienced with horses outside the show ring that you will share with us? Recently I started our stallion Lorenzo El Bri driving. He is by CH El Brillo and out of Lara El Ludjin, a Ludjin El Jamaal daughter. He was really successful in the European shows; European Champion four years ago. I started him driving a couple of weeks ago, and he really did amazing. It shows that halter show horses can be ridden and driven. For me, that is so important, that the stallions also get worked. They need to be kept busy and not just kept in their stall doing nothing. It is a really important thing that the stallions get other work. What are the positive aspects of breeding and showing Arabian horses that you really enjoy? It starts with a lot of thinking and planning for the right stallion. And then when the mare gives birth, it is the highlight and expectations of the breeding are fulfilled. Later, it is when you see them successful at the shows.

If you could change just one thing about this industry today, what would it be and why? I would require more transparency and more honesty. Specifically, I would like to see stricter worldwide controls against illegal doping of horses. I also support the idea of periodic continuing workshops for judges that would result in more consistency in the scoring. n Volume 46, No. 6 | 397