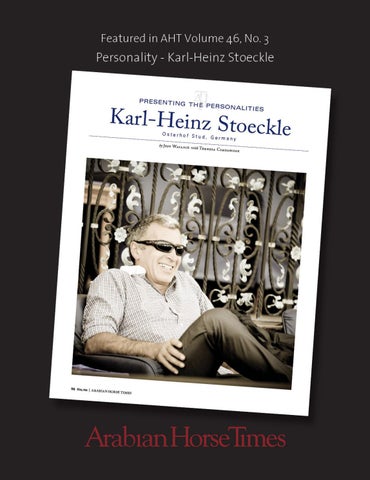 by Jeff Wallace with Theresa Cardamone

The famous Tersk bred stallion Kubinec (Balaton x Kosmetika), whose magnificent beauty and trot remain a favorite of many.

estled in the forested foothills of the Bavarian Alps near the border of Austria, Karl-Heinz Stoeckle’s Osterhof Stud has been breeding Arabian horses for close to thirty years. The series of small barns and other buildings that pepper the landscape sets off the natural beauty of the area. Karl-Heinz has created an orderly environment with intentional thought behind each decision. He doesn’t believe in erecting large buildings, preferring to organize the stud with smaller structures. Constructed in an industrial/urban style of a mixture of concrete, wood, and metal, it is a very intriguing fabrication. In the stud barn, the stallions go out the back doors of their stalls each day to a communal area, where they can see other horses or nibble on the chew toys thoughtfully provided. Each evening, they come back inside to their night stall, a place where they can rest without the need to engage with the other horses. Consideration is given to every detail. Speaking with Karl-Heinz brought a memory of a conversation I once had with my dad. Because he was an oilman, I assumed he would be voting for the candidate who was big on oil. My dad quickly set me straight. He wasn’t about to vote for someone only because they were pro oil or good for his business. He would only vote for the candidate that would do the greatest good for the most people. Karl-Heinz Stoeckle is cut from the same cloth. He has a savvy and sophisticated approach to marketing his horses that stems from his holistic thinking. He thinks beyond himself and his program to the greater population and the betterment of the breed. There are approximately 45 horses that make Osterhof Stud their home. Osterhof gained the full attention of the Arabian community when he bought the incredible Kubinec (Balaton, by Menes x Kosmetika, by Muscat) from Tersk Stud, where he was foaled in 1987. In a serendipitous twist, that is also the year that Karl-Heinz Stoeckle founded Osterhof Stud. I sat down with him recently to capture some of his thoughts.

Tell us about the legendary stallion Kubinec and his vast influence on the Arabian breed in Europe. Kubinec was very special to me. He is the only five-star stallion in the European Conference of Arab Horse Organizations (ECAHO). Some stallions have lots of stars due to show wins, but not stars for offspring,

Perhaps his most beloved win was his comeback at Aachen when he was named the Nations Cup Reserve Champion Stallion at the age of 14, and in “pasture” condition. The whole crowd was applauding him, cheering him, as he trotted around the arena. He had such charisma; he always had the crowd on his side. Why did you not continue to breed to Russian, Tersk-bred stallions? My only visit was in 1999 or 2000, when I brought back eight horses, including the stallion Padishah (Drug x Purga, by Gvizd) born in 1996. During the trip, I realized that not only had Tersk turned a big corner and entered down a very different path, but so had the breeding of straight Russian horses. Therefore, I decided that my Kubinec daughters would be bred to the best stallions available, rather than preserving the straight Russian breeding. So, if you didn’t go the Russian route with the Kubinec daughters, what did you do and what

have the results been? I used WH Justice (Magnum Psyche x Vona Sher-Renea, by El Sher-Mann), then Ajman Moniscione (WH Justice x Anthea Moniscione, by Padrons Ghibli); Marajj (Marwan Al Shaqab x RGA Kouress, by Kouvay Bey), then Monther Al Nasser (Ansata Hejazi x Aliah Al Nasser, by Imperial Mahzeer) to great success. I also used RFI Farid (RFI Maktub x RFI Fayara El Shiraz, by Shiraz El Jamaal), Al Lahab (Laheeb x The Vision HG, by Thee Desperado), and F Shamaal (Maysoun x Sarameena, by Fa Ibn Sar) with success. But I am more interested in your readership looking at photos of the resulting offspring from Kubinec daughters and the stallions mentioned, and deciding for themselves what they feel has been the best cross. If they would like to turn it into a bit of a contest, I am game! Just read my new ideas for judging Aachen; it is the year of this line of thinking for me.

KARL-HEINZ STOECKLE What are your opinions of the contributions of Marbach and Babolna Studs over the years? Marbach was a big program in the 80s—very influential. So was Babolna. Tersk was thriving in Russia at the same time and was big until the middle of the 90s. Their contributions now seem from very long ago. Why go to Poland if you don’t breed Polish horses? I go to Poland because their marketing is par excellence, and I learn more every visit. I appreciate the longevity of their successes and the many horses they breed who represent, in my opinion, a complete horse. The Poles breed for a strong, athletic, beautiful horse, which is why they are so successful. Pianissima (Gazal Al Shaqab x Pianosa, by Eukaliptus) is my all-time favorite example of a complete horse—she is simply perfect. Who are your favorite horses still alive that you don’t own? Pianissima, of course, and Marwan Al Shaqab (Gazal Al Shaqab x Little Liza Fame, by Fame VF) for sure. Marwan Al Shaqab has been the most influential stallion for the last eight years in the development

of Arabian horses around the world, and Pianissima … Pianissima is what a horse should be in every way. By the way, I have not judged her, nor could I, as the conflict I speak of in this interview is simply too big—I love her! Do you enjoy being a judge and if so, why? Judging is a very important experience for me. It is extremely hard work if taken seriously. When I judge a show, I consider it work, not a holiday. What do you look for in a judge? I look for a person who is open and transparent to anyone, and who is willing to expose his conflicts of interests to the world, not just to himself and one other. What do you think about trainers being judges? Trainers are the most qualified people for it, but like everything, there are two sides to every coin. Even though they are the most qualified in my mind, they are also walking and breathing masses of conflicts of interest—enough said. What are your opinions of the different judging systems around the world? The best system in the world for judging horses is the one we used to judge the 2015 Arabian Breeders World Cup show in Las Vegas.

Kubinec winning the title of Reserve Champion Stallion at the 2002 All Nations Cup.

What is the most important issue we need to address to ensure success going forward for the Arabian breed? In everyday life, judges take oaths and swear to be fair and honest, so I love the Las Vegas show approach. There, the judges sign a contract to try to create honesty and fairness. I respect the committee and their approach to make the event both great and fair, but it doesn’t go far enough. Judges are only human, which is why they sometimes fail. We expect that they will resist all of the incentives dangling in front of them, but they need our help to create a system of accountability,

not just our criticism. Every judge should divulge their conflicts of interest in a sworn affidavit; that all known conflicts havebeen revealed and that they pledge to uphold truth and fairness, and not be influenced by potential conflicts.

Has involvement from the Middle East been good for the Arabian market? Yes! But for some of the breeders, owners, trainers and judges, the temptation of money was too great to handle this development in a trustful and responsible way.

If they lie, or do not do what they said they would, then, like in Germany, they would go to jail or an equally strong penalty would apply. This should be a global, universal policy change that will build accountability and trust. If self-interest isn’t made accountable, then it will always be out of hand. It doesn’t help the judges to sit back and criticize their actions while their self-interest plays out unpunished. If we rebuild trust we have a future.

What is the biggest mistake you see breeders making today? Allowing trainers to buy their best horse at the right time, meaning when no one knows how good it is yet except the trainer and breeder. The trainer then sells it for ten times that much and pockets the profits. Breeders should advertise through outlets like Arabian Horse Times and sell their horses themselves with the help of trainers, but don’t sell to trainers directly. You are a man of strong opinions and convictions, so what are the things you DO NOT want to talk about? Me! I prefer not to talk about myself. What we are doing here is what I prefer, talking about things far more current and important to the present and future, not only for the Arabian horse, but for all of us, period. n

As you got on the plane to leave after judging in Las Vegas earlier this year, what two things were most on your mind? First, the quality of the horses exhibited during the show was amazing and second, I decided to take a break from judging!