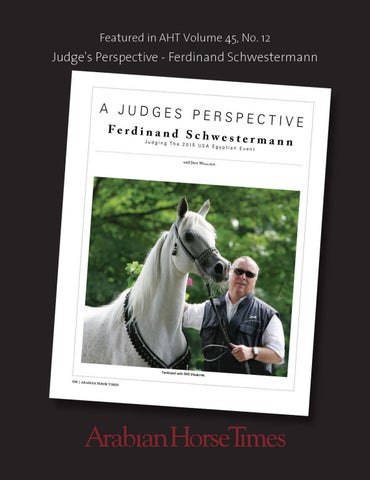 hat led you specifically to the Egyptian Arabian horse? My grandparents in Switzerland had horses; heavy coach horses. These were not the type of horses I had in mind. Since early childhood, I was fascinated by the history and the beauty surrounding the Egyptian Arabian horse. These were the horses that mesmerized me. I was fascinated by the important historical role the Egyptian Arabian horse played during the times of the great Pharaohs and also the way the Bedouins of Arabia were carefully breeding for mounts with great courage and endurance. Encouraged by the success of early U.S. and European importations, I travelled to Egypt and brought home three carefully selected mares, namely Teebah, daughter of famous Kout El Koloob by S.E.A. Maddah, Julia by Ibn Akhtal, and WardShah by Adeeb.

That was the beginning of our breeding program that started in Switzerland in 1989. Describe your most favorite place in your home country of Switzerland. My most favorite place is Brig, in the county of Wallis where I spent my childhood. The town is famous for Stockalper in the mountainous region, at the foot of the Simplon pass, known for Napoleonâ&amp;#x20AC;&amp;#x2122;s passing across the alps. The ski resorts Saas-Fee and Zermatt, were only a short travel away from homeâ&amp;#x20AC;&amp;#x201D;great skiing and mountain hiking. Describe the influence that your judging assignments have had on how you see the world of Arabian horses. When judging, I am able to experience the various types and quality of horses in many regions of the world, like the Middle East, Europe and UK. That led to my firm belief that type is the one word that expresses the degree of similarity to the standard of physical perfection

Janette and Ferdinand with DHS Miraya El Nizr and Ma-Ajmala.

FERDINAND SCHWESTERMANN of the breed. So, judging at shows gives me a great insight into the standard of the breed in that particular country. Even so, I am aware of the fact that some outstandingly beautiful representatives of the breed are never shown.

The impact of Nazeer has been beyond profound in breeding programs all over the world. Why do you think that is? Nazeer, a dominant stallion, had a great influence on the breed and has left behind some great sons that in turn have influenced the breed further. Just think about Morafic, for example, and the legacy he has left behind.

Tell us a little about the history of Egyptian Arabian horse breeding in Germany. What are your thoughts on the early breeders of that country? In Germany there were, and still are, outstanding breeders that have established breeding programs that last today. Also, visionaries like Dr. Kranz and Dr. Nagel, helped the Egyptian Arabian horse in Germany; especially after importing some outstanding horses from Egypt, such as Hanan or Nadja, and Hadban Enzahi. What is your favorite Arabian horse show destination and why? My most favorite Arabian horse show destinations are the Egyptian Event

Europe in Lanaken/Belgium, and the European Championships, an ECAHO title show, in Verona/Italy. Verona is a great place to experience art, music, fashion, great food and excellent wines, together with the most beautiful representatives of the breed. The Egyptian Event Europe in Lanaken is the show in Europe for straight Egyptian Arabian horses; an experience no one should miss. If you could resurrect any two horses, who would they be and why? The stallion Morafic, because of the great impact he had on the breed, and the mare Yosreia, who influenced the breed in a great way.

Erwin and Annette Escher with Ferdinand.

What does your dream horse look like? My dream horse is Morafic, He embodies my vision of the Arabian horse closest. Have you spent any time in the deserts around the world, and if yes, do you like the desert? Yes, I have been able to spend some time in the desert, be it in Jordan, Egypt, the U.A.E. or in the KSA. The desert is a fascinating place, yet very much alive and still so deadly. I like the desert. Who have been your mentors? Please name a couple and tell us about them. Dr. Kranz from the Weil-Marbach state stud in Germany, Dr. H. Nagel of Katharinenhof, Germany, and Judith Forbis of Ansata Arabians. By talking to them, I have gained some insight into their breeding programs. This enabled me to further my breeding program as best as possible. Their input of the breed is of enormous value and I am forever thankful for their support granted to me and the breeders around the globe. What does it mean to be Swiss? I am proud to be Swiss and I am proud of our historical past. To date, we are known for our punctuality, strive for perfection, and our discipline. These traits make most Swiss people very reliable. Also, economically speaking, the Swiss are a nation to be reckoned with, for example, the pharmaceutical industry and the nutrition giant, Nestle.

The Schwestermanns with Donald and Judith Forbis.

Ferdinand and Janette Schwestermann with Nasira, DHS Hadiyah and Ma-Ajmala.

What quality do you most deplore in Arabian horses? What is your most favorite quality? What I deplore most in the Arabian horse are a very poor tail carriage, small eyes and a heavy neck. That leads to the conclusion that I look out for great tail carriage, a big, round eye and an elegant neck.

Will you cast a horse aside with poor legs? I will not necessarily cast a horse aside with poor legs, but definitely will give it the corresponding marks/points. Tell us about your involvement with the Annual European Egyptian Event and are you happy with how it has evolved? I, together with my wife, have been involved with the annual Egyptian Event Europe since 2003-2005 in Baden-Baden, Germany, and since 2007 to present in Lanaken/Belgium. I am very pleased the way this stand-alone show for the Straight Egyptian Arabian horse has evolved over the years. It has become the window of the breed for the European breeders, and we are very happy that every year so many visitors from all