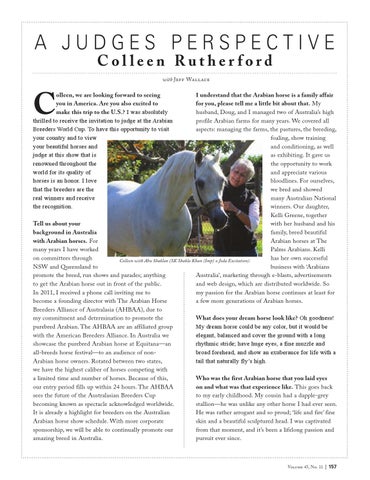 I understand that the Arabian horse is a family affair for you, please tell me a little bit about that. My husband, Doug, and I managed two of Australia’s high profile Arabian farms for many years. We covered all aspects: managing the farms, the pastures, the breeding, foaling, show training and conditioning, as well as exhibiting. It gave us the opportunity to work and appreciate various bloodlines. For ourselves, we bred and showed many Australian National winners. Our daughter, Kelli Greene, together with her husband and his Tell us about your family, breed beautiful background in Australia Arabian horses at The with Arabian horses. For Palms Arabians. Kelli many years I have worked has her own successful on committees through Colleen with Abu Shaklan (SK Shakla Khan (Imp) x Joda Excitation). business with ‘Arabians NSW and Queensland to Australia’, marketing through e-blasts, advertisements promote the breed, run shows and parades; anything and web design, which are distributed worldwide. So to get the Arabian horse out in front of the public. my passion for the Arabian horse continues at least for In 2011, I received a phone call inviting me to a few more generations of Arabian horses. become a founding director with The Arabian Horse Breeders Alliance of Australasia (AHBAA), due to What does your dream horse look like? Oh goodness! my commitment and determination to promote the My dream horse could be any color, but it would be purebred Arabian. The AHBAA are an affiliated group elegant, balanced and cover the ground with a long with the American Breeders Alliance. In Australia we rhythmic stride; have huge eyes, a fine muzzle and showcase the purebred Arabian horse at Equitana—an broad forehead, and show an exuberance for life with a all-breeds horse festival—to an audience of nontail that naturally fly’s high. Arabian horse owners. Rotated between two states, we have the highest caliber of horses competing with Who was the first Arabian horse that you laid eyes a limited time and number of horses. Because of this, on and what was that experience like. This goes back our entry period fills up within 24 hours. The AHBAA to my early childhood. My cousin had a dapple-grey sees the future of the Australasian Breeders Cup stallion—he was unlike any other horse I had ever seen. becoming known as spectacle acknowledged worldwide. He was rather arrogant and so proud; ‘life and fire’ fine It is already a highlight for breeders on the Australian skin and a beautiful sculptured head. I was captivated Arabian horse show schedule. With more corporate from that moment, and it’s been a lifelong passion and sponsorship, we will be able to continually promote our pursuit ever since. amazing breed in Australia. olleen, we are looking forward to seeing you in America. Are you also excited to make this trip to the U.S.? I was absolutely thrilled to receive the invitation to judge at the Arabian Breeders World Cup. To have this opportunity to visit your country and to view your beautiful horses and judge at this show that is renowned throughout the world for its quality of horses is an honor. I love that the breeders are the real winners and receive the recognition.

Is judging horse shows a big part of your life or just an occasional thing? Judging Arabians in Australia as a National Arabian judge limits you to the number of Arabian shows you get the opportunity to judge. We try to encourage our lower level judges to officiate at many of the smaller shows held over weekends; these are normally all-breeds, as well as Arabians. I have judged at every major show in Australia and New Zealand over the years, including all breeds and increasingly Miniature Horse shows. What attracted you to the world of horse show judging? I saw judging as an opportunity to learn form to function in the horse. I was determined to be known as a judge who judges the horse as I see it in front of

This gives our classes a variety of types and heights, something for everyone. • The Arabian Pony is increasingly popular, a beautiful blend of Pony and Arabian. They truly are every little girl’s dream pony. • An Arabian Riding Pony is a spectacularly finer animal than the Arabian Pony, often having the look of a small version of a large horse perfectly in balance, combining the look of a Thoroughbred and Arabian, but mostly Pony in size. • An Anglo Arabian is Arabian and Thoroughbred; a bright and bold performance horse.

COLLEEN RUTHERFORD me, without prejudice. It seemed a natural progression when Doug and I were married for us to both become National Arabian judges in Australia. Tell us a little bit about the derivative breeds that you have in Australia. This could take several pages! The Arabian Horse Society of Australia is split into several sections in which you can register derivatives. Our derivatives are spectacular functional horses and ponies of all sizes suitable for children to adults. There is no limit to the high percentage of Arabian blood with the lowest acceptable amount of 12 ½%.

• Warmblood Arabians are becoming extremely popular; the Arabian giving the beauty and lightness, while the Warmblood helps create outstanding moving performance horses with a mind for the job at hand. • The Quarab is one of the smaller registry’s in Australia, but again, produces great performance horses. • Stock Horse Arabians are a performance horse suitable for all purposes. • A Partbred Arabian is any % of Arabian and any height. Some look like purebreds, others exhibiting the smallest percentage of Arabian. This can make for interesting judging in an open class. You need to look for both without showing bias to type and/or jeopardizing conformation, form or function. If you could resurrect any 2 horses, who would they be and why? I owned two wonderful Arabian mares I wish were both still with me today. I would love to have them to breed the champions of today—I have no doubt they would.

Australia has had the best of both worlds in creating its own families of Arabians horses. We imported from Europe, giving us movement and natural tail carriage; our American imports have given us the smooth bodies, longer necks and finer throats. The

that I would never have had the opportunity to see. I have met so many fabulous likeminded people, and have had the opportunity to judge and co-judge with a number of international judges from Europe and the USA. Cindy Reich, Francesco Santoro, Bruce McCrea, Shannon Armstrong, and the 2000 Australian National Championships with Jerzy Białobok and Mark Himmel, are just a few of the wonderful breeders and judges I have had the pleasure to meet through the Arabian horse. Colleen judging at the 2014 Summer Show.

horses winning in the show ring today in Australia are a wonderful combination of all of the above, clearly evident in their pedigrees. In addition, many stunning Arabian horses are being exported overseas and many more are in the barns of small and large breeding farms waiting for their chance to shine. Australians have historically placed a lot of importance on the soundness of their horses’ feet and legs. Many breeders have one or two foals a year which may become work stock on large farms or outback stations; they might end up becoming mum’s dressage horse or the children’s pony club mount, and others are destined for the show ring.

Do you prefer the desert or the ocean? That’s difficult! I love the vastness of deserts; the colors and vistas. I look into a desert and I am in awe of pioneers, the history and the hardships they endured. But then, to watch the sun rise over the Pacific Ocean makes you grateful for the life we have. I have seen many sunrises over the Pacific now and before I return to Australia I want to watch at least one sunset over the North Pacific. What other destinations while in the U.S. do you plan to visit? Desert and ocean! I really want to see Monument Valley; I want to walk barefoot on the ground. I must see the Grand Canyon, of course, and hopefully Santa Ynez Valley that I hear so much about. And if time permits, Yosemite National Park, with a drive down the Pacific Coast to L.A. So, if you see us driving down the wrong side of the road, please be kind and point us in the right direction! n

Opportunities brought into Australia with frozen semen from throughout the world have opened up a whole new ball game, giving us a more accessible opportunity to breed to some of the world’s leading sires. What women before you in the Arabian breed did you learn the most from? Years ago I attended every seminar I could, often travelling long distances. Val Males, Leslie Dowey and Daphne McCrae, three knowledgeable Australian ladies, were instrumental with setting judges exams, formed ‘The Standard of Excellence’ in Australia and taught Doug and I about the breeding horse. How has the Arabian horse enriched your life? I have traveled to cities and parts of our wide vast land