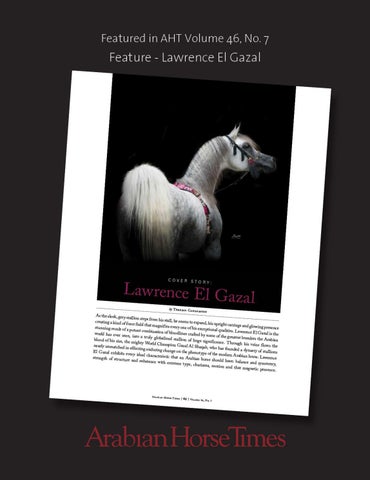 As the sleek, grey stallion steps from his stall, he seems to expand, his upright carriage and glowing presence creating a kind of force field that magnifies every one of his exceptional qualities. Lawrence El Gazal is the stunning result of a potent combination of bloodlines crafted by some of the greatest breeders the Arabian world has ever seen, into a truly globalized stallion of huge significance. Through his veins flows the blood of his sire, the mighty World Champion Gazal Al Shaqab, who has founded a dynasty of stallions nearly unmatched in effecting enduring change on the phenotype of the modern Arabian horse. Lawrence El Gazal exhibits every ideal characteristic that an Arabian horse should have: balance and symmetry, strength of structure and substance with extreme type, charisma, motion and that magnetic presence.

Bred by beloved horseman and renowned breeder Ferdinand Huemer at his La Movida Arabians in Austria, Lawrence El Gazal was foaled in 2008. Before his career as a stallion was ignited, Lawrence earned the titles of 2009 Austrian Junior National Champion Stallion at Wels and 2011 Junior Gold Champion Stallion at Kauber Platte, in Germany. Outside the show ring, one of the greatest honors Lawrence El Gazal received was to be invited to stand inside the State Studs of Poland. It is a rare occasion when an outside stallion is used at even one of the state owned farms, but Lawrence was used at all three. He produced one of the finest foal groups ever for Bialka, and covered exceptional mares such as Michalów Stud’s World Champion Mare Emanda, the dam of World Champion Mare Emandoria. Although she failed to carry to term, the selection of Lawrence El Gazal for Emanda was a testament to Michalów Director Jerzy Bialobok’s faith in him. Gazal Al Shaqab is only half of the equation that makes up the sum of Lawrence El Gazal, who is intensely Nazeer-bred both through his sire and through his uniquely bred dam, Lara El Ludjin. She is a rare, inbred double-Ali Jamaal mare, being by his son, Ludjin El Jamaal and out of his daughter, Lilyh El Jamaal, the

first of the foundation mares for La Movida, who was purchased from famed Brazilian breeder Lenita Perroy in 1992. The pedigree becomes even more interesting when it is noted that the El Shaklan daughter Lydira El Shaklan is both the dam of Ludjin El Jamaal and the maternal granddam of Lilyh El Jamaal, making them ¾ siblings. The genetic power of the bloodlines of Lara El Ludjin was evidenced at the Austrian Nationals in 2009, where Lara was the dam of both Lawrence El Gazal, the Austrian National Junior Champion Stallion, and Lorenzo El Bri, the Austrian National Senior Champion Stallion. Now, Lawrence El Gazal has taken up residence in the United States at Michael Byatt Arabians in New Ulm, Texas, where he is standing for the 2016 season. There, he has joined an impressive roster of stallions representing some of the most successful breeding farms from throughout the world, all of who f lourish under the management of Michael Byatt and his team. As his American-bred foals begin to arrive, Arabian enthusiasts will be able to see firsthand, what they have only heard about from the Polish breeders … the consistency and excellence of the sons and daughters of Lawrence El Gazal. ■