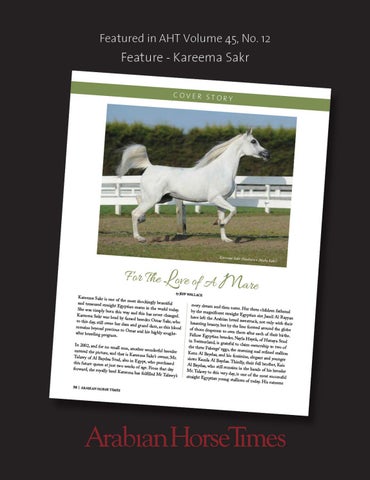 For The Love of A Mare by JEFF WALLACE

Kareema Sakr is one of the most shockingly beautiful and treasured straight Egyptian mares in the world today. She was simply born this way and this has never changed. Kareema Sakr was bred by famed breeder Omar Sakr, who to this day, still owns her dam and grand dam, as this blood remains beyond precious to Omar and his highly soughtafter breeding program. In 2002, and for no small sum, another wonderful breeder entered the picture, and that is Kareema Sakr’s owner, Mr. Talawy of Al Baydaa Stud, also in Egypt, who purchased this future queen at just two weeks of age. From that day forward, the royally bred Kareema has fulfilled Mr Talawy’s

every dream and then some. Her three children fathered by the magnificent straight Egyptian sire Jamil Al Rayyan have left the Arabian breed awestruck, not only with their haunting beauty, but by the line formed around the globe of those desperate to own them after each of their births. Fellow Egyptian breeder, Nayla Hayek, of Hanaya Stud in Switzerland, is grateful to claim ownership to two of the three Faberge’ eggs, the stunning and refined stallion Kenz Al Baydaa, and his feminine, elegant and younger sister Kamla Al Baydaa. Thirdly, their full brother, Kais Al Baydaa, who still remains in the hands of his breeder Mr. Talawy to this very day, is one of the most successful straight Egyptian young stallions of today. His extreme

type and overall goodness has drawn not only fans from all over the world, but show ring accolades such as World Champion Egyptian Colt in Rome and 2012 European Egyptian Event Champion Colt, always at the end of the talented showman Raphael Curti’s lead, and always after claiming success as the two exit the ring. Kareema Sakr has gifted her children with her gorgeous and glorious head type which she comes by naturally from her magnificent breeding. The females behind Kareema, such as Alidarra and her Imperial Madori daughter, Maha Sakr, are world-class mares. Her tail female line to Babson, Ansata, and Glorieta mares Sabrah, Ansata Sabiha and Ansata Serima hail from the same tail female line as 1980 U.S. National Champion Mare Fa Halima, a full sister to Ansata Sabiha, all coming together behind Kareema Sakr, enabling her to be the dazzling beauty that she is, as well as to pass it on so very freely. On Kareema’s sire’s side, are the two genetic chestnut breeding giants *Magidaa and Ansata Jellabia, both dam to a string of outrageously important

horses such as stallions Nabiel and El Hadiyyah, who also have great influence in the unique look and quality of Kareema Sakr. Not long ago, it became time for Mr.Talawy to send his precious Kareema to the new home of Privilege, the pride and joy of Raphael Curti and partner Philip Looyens. They had been asking for the management of this now entitled Queen of Egypt for quite some time, but treasures such as Kareema are hard to let go of. Yet, it was the obvious, right thing to do. There is, of course, dual love and admiration between her new managers and herself, and in 2016, Kareema will have foals by world champions and legendary global sires Marwan Al Shaqab and Al Adeed Al Shaqab, the latter she will carry. When Kareema steps in front of the camera lens or is simply outside during the day at play, she always leaves those in her life with the deepest feeling of appreciation for the love of a mare. ■