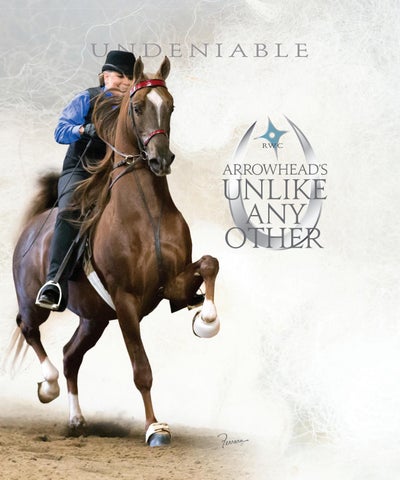 He’s called Elvis, and he’s special. Yes, of course, that’s what all horse owners say, especially when marketing, and it is rare sport watching the people around Arrowhead’s Unlike Any Other try to restrain themselves when they are asked about him. Inevitably, the accolades rise like smoke, and his friends really do try to slow it down, because they are genuine horse people and they know it sounds crazy. They know that no stallion is ever proven until his foals have arrived (and preferably, are wearing leather). But it’s a little frustrating because they know that if you see him, he’ll convince you all on his own. That’s been proven. In January, Tish Kondas rode Elvis—Arrowhead’s Unlike Any Other—for the crowd at the All American Cup Stallion Service Auction, and the big-trotting stallion brought the house down. It’s also what they hear from visitors to both places he lives (at Singing Hills Stable, in Shelbyville, Ky., for most of the breeding season, and otherwise, at Showtime Training Center in Newnan, Ga.). He works most days, and railbirds are welcome to watch.

2017 Saddlebred Colt Arrowhead’s Unlike Any Other x Stonecroft Ultraviolet

They’re also hearing it about his foals. The oldest, Saddlebreds, are yearlings and some will be entering training in the fall. This year, Half-Arabians began arriving at farms around the country—not just at Showtime, where Elvis’s owners keep mares, but at some powerhouse breeding operations like Shea Stables, Boisvert Farms, Cedar Ridge and more. One, a filly out of Ames Patina, was the co-high seller at the Buckeye Select Sale, earning a bid of $45,000 at just 3 months old.

beautiful Miss Moriarty. While Saddlebred bloodlines are often unfamiliar to many Arabian owners, some names resound even across breed lines, and Elvis’s heritage is packed with them: Callaway’s Blue Norther, World’s Grand Champion Will Shriver, CHCourageous Admiral, Worthy Son, Supreme Sultan and a lot more. The whole package emphasizes ability and gameness, and quite a few of his ancestors are reliably high quality producers.

The expectations for this young stallion don’t come out of nowhere; he has a stellar background. He is owned by EAC Equine LLC, another name for longtime Arabian owner and exhibitor Colleen Boylan Cooper, her husband Conor, and aunt Jeanne-Marie Boylan. Cooper has been a client of Showtime Training Center’s Tish Kondas for nearly 15 years, and as Kondas testifies, knows her way around a show ring (“You can put the hammer down on that girl and she’s going to produce,” she says). Elvis was bred by high profile Saddlebred trainer, breeder and judge Melinda Moore, who inherited her love of Saddlebreds from her parents, legendary trainers Tom and Donna Moore.

The combination already has been successful. Elvis’s full sister, Futurette, was named 2016 World’s Reserve Grand Champion in Fine Harness and World’s Champion Junior Fine Harness at the age of 5, in addition to several other top awards. When Moore was asked why she chose Wine Women And Song for Miss Moriarty, she replied, “I’d already had a full sister, so I knew it would work.”

However, it’s useful to begin with facts, starting with his pedigree. He’s by Wine Women And Song, who was sold to South Africa at the age of 4 (before any of his early foals could demonstrate their considerable ability), and out of the

At 5, Elvis’s show experience has been limited, due to beginning his breeding career. Even so, his record includes the World’s Reserve Championship in 3-Year-Old Fine Harness, which he scored in his competition debut. He is expected to return to the ring this fall, and the question is, continue in harness or go under saddle? He works well in both. In the meantime, demand for his stud services has done nothing but rise: in his first season, he covered such Saddlebred mares

as Christmas In New York, dam of the well-known sire Undulata’s Nutcracker, and World Grand Champion CHMother Mary. This year, Kalarama Farms and top trainer Matt Shiflet, among others, signed on. In Arabians, in addition to the Sheas, Boisvert, Cedar Ridge, and the respected farrier Stanley Orr, he lately has attracted Rooker Training Stable, Victoria Arabians, Kiesner Training Center and more.

It’s not just the headline breeders that the EAC team and Kondas appreciate. It’s the bloodlines they are offering. “Afires Heir’s full sister,” Tish marvels, “and daughters of Apollopalooza, Matoi, Afire Bey V, IXL Noble Express … the Dutch Harness mare, Ritida …” And others that play in those leagues. “It’s such an honor for us,” Colleen adds. That’s what’s behind all the hoopla. But beyond the statistics is a story that offers another important perspective on Arrowhead’s Unlike Any Other. In the beginning, Colleen Cooper was not looking for a stallion. Tish Kondas was, but when she and her partner, Carla Schiltz, visited Arrowhead Farm in December 2013, they weren’t shopping for EAC Equine LLC, which then was just forming and was targeting Saddlebred mares to develop a Half-Arabian breeding strategy. It was when Melinda Moore showed them a cocky chestnut yearling colt that everything changed. “I was, like, ‘What is that?’” Tish says. “I was dying, thinking, ‘This is the one.’” Then she thought of Colleen and EAC; he could fit into their future, and besides, in Tish’s words, “They’re great owners to work for.” It would be a win/win situation.

When Colleen, Conor and Jeanne-Marie visited Arrowhead, they agreed. “Tish has a great eye—I’ve always trusted it—and I’ve been around long enough to know what I like,” Colleen says. “And I liked him.” Significantly, while unexpected, the stallion also satisfied EAC’s long term goals, one of which was to promote interest in breeding, something they feel exciting foals can do. Colleen, who grew up in horses, has opened that door for her children as well, and Elvis is a big part of that commitment to the future for both her family and the industry as a whole. She also wanted to show a little in the Saddlebred side of their program. “It isn’t that I want to give up Arabians,” she clarifies. “It’s that I just want to learn from another breed. I’d shown Half-Arabians, but I had never ridden Saddlebreds, and I wanted to see what I could learn in Saddlebreds that I could bring back to Arabians.” It was all systems go. Melinda had started Elvis, and when he was ready, he was moved to Singing Hills, under the supervision of Gene and Annalize van der Walt. Gene has provided further training and, in connection with Tish and EAC, developed the stallion’s show career. Annalize, who directs the farm’s reproduction

division—they handle nearly a dozen sires and foal out 80 to 100 babies annually— is responsible for Elvis’s breeding duties. “In person, he’s breathtaking,” Tish observes. “He’s easily 16.2, and he’s so balanced— he’s a statuesque individual.” “He’s so beautiful, he’ll hurt your eyes,” Gene says bluntly. What has amazed everyone is the consistent standard of Elvis’s foals. “It doesn’t matter what you cross him on, what bloodlines, Saddlebred or Arabian, they’re all freaks,” Tish says. “I can honestly say I haven’t seen a bad one. They’re all colors, all different, but they all have quality—the same high-headedness, great posture, great attitudes.”

Worthy Son For What Its Worth In Reality Miss Megabucks

She admits that that sounds outlandish, but everyone who sees many of the stallion’s foals agrees. “I’m beyond excited,” she laughs. “The first thing people say when they get here is ‘I want to see his babies.’ People slow down driving down the street when [the foals are] in the pasture.” That quality was underlined when EAC First & Finest was judged 2016 World’s Reserve Champion Weanling from an in-hand class of 17. Gene van der Walt cites Elvis’s pedigree to account for his success with such differing bloodlines (at least, in Saddlebreds). “He has a lot of that old Will Shriver blood in him,” he says, “but a lot of the old blood is so diversified that I believe you can breed him to about anything and not get in trouble. I’m not trying to sell you a breeding; that’s just the truth.” And there is another factor in the Elvis mix, maybe the most important of all, they say. “His disposition is wonderful,” Gene notes. “As a stud, he’s great to be around. We’ve already worked around some of his weanlings and they seem to have really good minds and good thinking.” “They are great thinkers,” Tish nods, “and they have tons of quality, which is what trainers want in their program.”

“He’s just a good soul,” Colleen reflects. “That’s 90 percent of it when you show, that you have someone who is game and trustworthy.” It’s only the beginning of the story, but two words that come to mind for those who know Elvis are “timing” and “historic.” The great ones are rare, they observe—but when great ones occur, they offer what is needed in their breed at the right time. Arrowhead’s Unlike Any Other enjoys an opportunity to make an impact on not one, but two breeds. One of the few who has seen this story unfold from day one is Melinda Moore, and she says that everything apparent today was there at the beginning, from the moment Miss Moriarty welcomed her son on May 10, 2012. Melinda has her own context—one which explains that although there is a reason for his impressive formal name, those who know him refer to him more familiarly. “Elvis Presley is and always was my favorite entertainer,” she explains. “He was unbelievable. When the horse Elvis was born, he was absolutely breathtaking— spectacular—in every way; he justified being named after the King. There was no way to fault him.” “He really is a King in our eyes,” Colleen agrees, “and we will continue to ensure that he is treated and honored that way. We have a responsibility to him to do just that.” ■

Arrowhead's Unlike Any Other, Featured in Arabian Horse Times

Arrowhead's Unlike Any Other, Featured in Arabian Horse Times