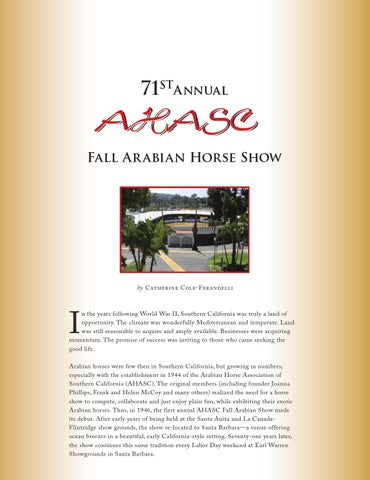 n the years following World War II, Southern California was truly a land of opportunity. The climate was wonderfully Mediterranean and temperate. Land was still reasonable to acquire and amply available. Businesses were acquiring momentum. The promise of success was inviting to those who came seeking the good life. Arabian horses were few then in Southern California, but growing in numbers, especially with the establishment in 1944 of the Arabian Horse Association of Southern California (AHASC). The original members (including founder Joanna Phillips, Frank and Helen McCoy and many others) realized the need for a horse show to compete, collaborate and just enjoy plain fun, while exhibiting their exotic Arabian horses. Thus, in 1946, the first annual AHASC Fall Arabian Show made its debut. After early years of being held at the Santa Anita and La CanadaFlintridge show grounds, the show re-located to Santa Barbaraâ&amp;#x20AC;&amp;#x201D;a venue offering ocean breezes in a beautiful, early California-style setting. Seventy-one years later, the show continues this same tradition every Labor Day weekend at Earl Warren Showgrounds in Santa Barbara.

The AHASC Fall Arabian Show is the longest, continuously running Arabian horse show in the United States. What is the draw of this show and how does it continue to bring trainers, breeders and exhibitors back to Santa Barbara during a hectic holiday weekend?

as open and amateur competitions. Each of these classes offers the opportunity to win purse money and one of the same silver buckles for champion, reserve and the subsequent placing horses. The show is also a great “last minute” qualifier show for U.S. Nationals, as well as Youth Nationals, Region One, and the Pacific Slope Championships.

Trainer Chris Culbreth probably says it best as he recalls his first Bill and Mary Ann AHASC Fall Show. “In Hughes have been 1980 I was eighteen involved with the years old and had just AHASC Fall Arabian started working for Bill Show for forty-five and Mary Ann Hughes. years, “Nearly as long Bill always wore the as we’ve been married!” coolest silver belt buckle laughs Mary Ann. stating, 1979 Champion “Dedicated show staff, Western Pleasure sponsorships, and Maturity Horse. Then continued support of and there, I strived to Khemosabi with Bert Husband and his mother, winner of the 1968 Santa Barbara, CA, Yearling class. trainers and exhibitors win one of those silver coming from California buckles! I made it my and other nearby states keep our show alive, vibrant goal, and did so, in the late 80s—one of my first big and fun. Every year we feature a Saturday ice accomplishments as a young Arabian horse trainer.” cream social which has been sponsored by Drake Farms for the last several years. We promote the Chris continues, “Through the years with the Performance Futurity/Maturity classes with the Hughes, other trainers, and then going out on my highly sought after ball caps, sponsored of late by own, I’ve used the AHASC Fall Arabian Show EVA’s Dr. Greg Byrne. Sunday afternoon brings our as the premiere event to bring out our young annual BBQ lunch, again courtesy of sponsorships. performance horses. In fact, my wife Michelle and We all love to come to Santa Barbara every year I became engaged at this show! We have returned with its attractions, but it is nice to be able to every year, even though some years back we reprovide camaraderie here at this very busy horse located to Scottsdale, Ariz. By the end of every show with these annual events.” summer, we are ready for a seaside destination, meeting and competing with our same show friends Held September 4-6, this year, the AHASC we’ve known for literally decades.” Fall Arabian Show is steeped in tradition, yet enjoys changing trends. Mary Ann is especially While the AHASC Fall Show started out as a impressed by the trail horse division of the show, “regular” horse show featuring the versatility of the saying, “In recent years, our trail horse classes have Arabian horse, it later developed as a top venue dramatically advanced in numbers. We do offer the for debuting young horses. Starting out with just a performance futurity and maturity classes for the few futurity and maturity classes, the show today young trail horses, but what really impresses us is features forty three different futurity, maturity, and the number of ‘old pros,’ both equine and human, senior maturity performance classes for purebreds that come to prepare for October’s U.S. Nationals. and Half-Arabians. These classes are further offered

This year, we had 181 trail horse ‘goes.’ We believe this to be the largest number of trail horse ‘goes’ of any Arabian horse show anywhere. It is very impressive, indeed.” Both Mary Ann and Chris acknowledge the reality of smaller numbers in recent years for the AHASC Fall Arabian Show, but remain optimistic for this horse show’s future. Chris explains, “We are all aware of the smaller annual breeding numbers. Depending on who to talk to, the numbers are down anywhere from 80%-90% from the highest years during the

late 1970s and 80s. Still, the AHASC Fall Arabian Show numbers are down far less, about 60%. This clearly illustrates the importance of having a West Coast venue to feature and introduce our top young performance horses, many of whom go on the following month to win at U.S. Nationals. The show committee remains strong and committed. The trainers, exhibitors and breeders love to come to Santa Barbara at the end of a long, hot summer. With all this combined, we and our trainer peers certainly plan to keep this event on our show schedule now and for the future.” n