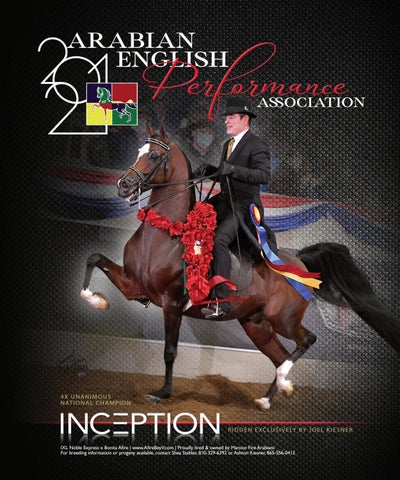 2020 AEPA BREEDERS OF THE YEAR

It was a particularly exciting and satisfying 2020 U.S. National Championship Show for the perennially successful team of Maroon Fire Arabians and Shea Stables. Even though it was a stressful and difficult year for the horse community and the entire world, the end of October brought some welcome joy and cheers for Arabian horse competitors in both the AEPA $100,000 Arabian and the $50,000 Half-Arabian Saddle Seat Futurities; classes filled with nose-to-tail talent and quality. In 2020 the winner of the Half-Arabian AEPA was The Heiristocratt (Afires Heir x Ritida, by Majesteit). This is auspicious for a multitude of reasons. The Heiristocratt, owned by I Ask LLC, was bred by Marty Shea (a 2020 Leading AEPA Breeder), ridden by Joel Kiesner (2020 Leading AEPA Trainer), sired

by Afires Heir (2020 Leading AEPA Sire), and out of Ritida (top Shea broodmare and the dam of seven National winning offspring during 2020). This must be some sort of a record for a broodmare. Ritida now has 12 National winning Half-Arabian offspring to her name. The purebred AEPA Futurity was won by Vicki Humphreyâ&#x20AC;&#x2122;s Drops Of Jupiter VH, by Afire Bey V grandson, SF Aftershoc, and out of an IXL Noble Express+ daughter. Reserve in the class, Inheiritor (Afires Heir x Sweet Summer Fire), was bred by Maroon Fire and ridden by Joel Kiesner for Candace Avery. Sweet Summer Fire had four national winners in 2020, two were previous multi-National Champions, Noble Soldier and Saxton DGL. The others were relatively new. Inheiritor, making his second trip to Tulsa, was 2019 U.S. National Champion English Pleasure Futurity. Imperator DGL

(Afires Heir) took his first top ten this year in the English Pleasure Jr. Horse for owners John Code and Greg Lymer. The stats for the Maroon Fire stallions, Afire Bey V and IXL Noble Express+, remain remarkably strong. Between these two, their sons and daughters won 28 national or reserve national championships and 153 top ten awards at the 2020 Youth, Mid Summer and U.S. Nationals. Twothirds of those were Afire Bey V get, though he passed away in 2015. IXL Noble Express+ offspring dominated the U.S. National Park with five of his offspring taking champion, reserve and three additional top ten awards. Junior breeding sire Inception (IXL Noble Express+ x Bonita Afire) won his fourth consecutive, unanimous U.S. National Championship (his second in the Park) with trainer Joel Kiesner. Inception’s full sister, Noble Blessing, was 2020 U.S. National Champion English Pleasure AAOTR 50+. Their dam, Bonita Afire, now has four national winners. Inception’s oldest offspring turn three in 2021 and are now trotting their first straightaways under saddle. Next summer … the show ring! Tim Shea can’t wait. “I’m incredibly excited about the Inception Half-Arabian youngsters we are riding and about to ride,” he laughs. “We couldn’t have guessed how well Inception would cross with Saddlebred mares. Necks, hips, style, elegance. I’ve never seen an Arabian sire hold onto the best Saddlebred attributes of the mares, while adding the best Arabian qualities. His purebreds are exceptional neck, front and hock!” It can’t be a surprise that Maroon Fire Arabians and Shea Stables have now imported an outstanding Crabbet-bred Arabian stallion as a potential English outcross here. As the breeders of the Leading All-Time Arabian Sire and the creators of the current dominant Arabian English bloodline, the Linigers and Sheas feel compelled to bring in a new cross. Their candidate is Rhythmic AHSA, a big, solidly built Afire Bey V look-alike from Australia. If the past 20 plus years are a precursor, the future is bright indeed!

For over a decade, Multi-National Champion Vegaz has powered the quality, longevity, mind and flat-out wow-factor it takes to win in todayâ&#x20AC;&#x2122;s competitive arena. No matter what division you trot in, his numbers donâ&#x20AC;&#x2122;t lie.

Book your breeding to Vegaz today.

Contact us for the perfect cross on your mares or young prospects we have ready to show! *Breeding packages available. Ar abian Horse Times | 6 | A.E.P.A. Futurity

After the winners were named,

points awarded and dollars counted, it didn’t shock anyone that SF

was named the AEPA Leading Sire in all categories: number of

winners, points and payouts. The highly decorated stallion has sired

AEPA winners every year since 2014, with prize money earned by his

Madusa). Jessica Clinton had a thrilling ride on the mare to win the

$50,000 Half-Arabian Futurity, two of the top ten winners were sired by

VH (x Bothered and Bewildered). At the 2020 Scottsdale Show, another of SF

the leading sire in all of the AEPA categories for 2020.

family, following the passing of renowned horsewoman L.A. Flynn. SF Aftershoc is now standing at Chrishan Park where they are thrilled to be managing the

“His get did particularly well at the 2020 U.S. Nationals in all of the English

classes, but especially well in the AEPA and futurity classes.”

The stallion himself won the AEPA Futurity class in 2009

with Peter Stachowski aboard. The following year, he and Peter

returned to the ring at U.S. Nationals, capturing the Reserve

2013, but Shan doesn’t rule out the possibility of him returning to the ring.

“He comes out everyday with his ears up, moving forward with a lot of enthusiasm,” says Shan. “We are really excited to have him at the farm.”

New owners Jim and Mary Martha Hagale are equally thrilled. “When we were watching at U.S.

Nationals this year, I remember telling Chris and Shan that we needed to breed to Aftershoc,” Jim recalls. “They just kept calling his name out as the sire of one after another of the class winners.”

Little did Jim know at the time there would be an opportunity to purchase the stallion. “We are very grateful to the Flynn family for everything they’ve done to promote this horse. Vicki Humphrey was also instrumental in managing this stallion’s career. We are honored to continue building his legacy.”

2020 statistics), the future continues to look bright. Next year’s class of contenders is really promising as

highest level in the 3-year-old classes, with a combined five tri-colored ribbons in the English Pleasure

Currently, SF Aftershoc has 195 registered foals on the ground. Chris, Shan and Jim are all looking forward to adding to that roster of already proven progeny.

“There are so many great ones out there,” says Jim. “Not only are they winning the AEPA classes, but they are also winning the other national, Scottsdale and regional championships. We are excited about the future of this great stallion and thrilled to be a part of it.”

Breeding with a focus on

From the pasture to the training barn... COME MAKE YOUR SELECTION TODAY!

Champions bred by Prestige Farms at 2020

roud, edicated & excited for the

Since its inception, we have been supportive and involved in the AEPA program.

on the English performance division, having inspired other

and breeding Arabians and Half-Arabians.

Strawberry Banks Farm is proud of the influence our stallions have had on the English performance horse, and we look forward to your visit to find your next champion sired by

THE ARABIAN ENGLISH PERFORMANCE ASSOCIATION with Peter Conway, President U.S. Nationals 2020 was incredible as we all came together and celebrated the Arabian horse. It was a joy to be there, and once again, the AEPA classes were the highlight of a fabulous week. I am always amazed at how the Arabian horse, our common bond, can bring us together. After reaching the milestone of $2 million dollars paid out in prize money, this is a good time to reflect on the AEPA and what it is all about. The benefits of the program and enrolling a stallion are clear. For the cost of donating just one breeding, the stallion owner gets a GREAT DEAL! • • • • • • •

Every foal sired by that stallion is automatically in the program. NO extra nomination fees. NO paperwork to enroll the foals. Progeny can compete in the $100,000/$50,000 classes as 4-year-olds. They can compete at the Buckeye and Scottsdale shows in the $20,000 AEPA classes for the rest of their lives. Every foal is more valuable. Every breeding is more valuable.

BUT THESE ARE NOT THE BEST REASONS TO BE INVOLVED. Do it because you love it! It is your passion! BE PART OF MAKING IT HAPPEN! Enroll your stallion, BUY AN AUCTION BREEDING, be a contributor to this wonderful community; continue helping the Arabian English horse prosper! A special thanks to the Arabian Horse Times and Equine Athlete Veterinary Services for supporting our Nationals classes and to Strawberry Banks Farm and Conway Arabians for their support of the Buckeye and Scottsdale Maturities. Most of all, THANK YOU, to every stallion owner that donates a breeding, and every breeder that buys one in the auction. It is your love of the Arabian English horse that makes this all possible. The AEPA was created to serve breeders and to promote the Arabian English Performance horse. Get involved, breed wonderful horses, enjoy the competition, and have these horses in your life! Board of Directors

The AEPA would like to thank its sponsors: Freedmanâ&#x20AC;&#x2122;s, fine leather harnesses, saddlery and accessories, and Equine Athlete Veterinary, the official equine health provider of the AEPA. saddle & Top Ten Vest sponsor

In its sixth year, payouts totaling $138,000 have been given out to Country Pleasure Maturity AOTR winners at the Ohio Buckeye Sweepstakes and Scottsdale Show, and since its inception in 2007, the open Saddle Seat Futurity Program has paid out over $1.825 million. In all, the AEPA has paid out over $2 million in AEPA-related classes!

Arabian English PErformance Association CHAMPIONS FROM THE PAST

We invite your inquiries on our upcoming English prospects

Join the OF CHAMPIONS