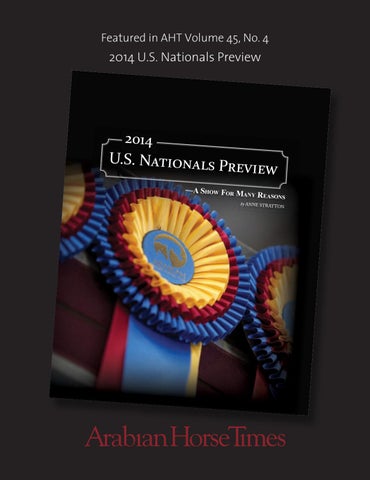 by ANNE STRATT ON

Estes Park, Dallas, Oklahoma City, Louisville, Albuquerque, Tulsa—the U.S. Nationals has come to town somewhere every fall (or, in the beginning, summer) for the past 56 years. This year, Arabian horse enthusiasts will descend on Tulsa, Okla., from all over the country October 17-25. Of course, the giant road show that is “the Nationals” will attract horsemen several days before; the expected 1,750 horses don’t move in overnight, nor do they move in without their luggage. By the time tack rooms have been organized, wash areas set up and groom’s accommodations designated, almost 4,000 stalls at Tulsa Expo Center will have been dedicated to the most prestigious event in the Arabian horse breed. The show is famous for the stress and pressure that goes with the territory of an important competition. But it is equally well known for the pride inherent in winning one of its silver or bronze trophies.

y its nature, the Nationals is somewhat the same every year. But every show evolves, AHA Executive Vice President Glenn Petty points out. “In all my years of managing horse shows, I thought one of these years I wouldn’t have to make any changes to the prize list except for the officials,” he smiles. He doesn’t manage the U.S. Nationals, but works closely with its Show Commission. “That never happens. The reality is that all breeds and disciplines are forever changing.” In 2014, the changes are more like tweaks, but there are several of them. One is that the top halter finals are back for good on Friday and Saturday nights. Although it means giving up the more atmospheric Pavilion for the less glamorous Ford Truck Arena, the last two years have shown that fans prioritize the timing—and its attendant prestige—more than the venue. And a new focus is directed at the Trail Division this year; classes will be moving from the Mustang Arena to the Pavilion before the halter division begins its preliminary competition. Entries also can expect new and upgraded equipment, the same as may be found at the Morgan Grand National and Quarter Horse World shows. Even with the lengthy roster of classes already lined up, new events have been slated, among them Showmanship AATH and Amateur English Trail. New prizes also are on offer in the reining division, where AHA is funding commemorative belt buckles for the champions. Not everything, of course, relates to competition. Six new members will be inducted into the Judges’ Hall of Fame and recognized at a reception in the AHA booth at 5 p.m. on the closing Saturday. This year’s honorees include Jim Brown, Cecile Dunn, Richard Sereni, Stanley White, and posthumously, Fern Bittner and Mike Villaseñor. Also new are a “Name The Foal” Contest, featuring a foal donated by ChrisShan Park, and a Blue Room (social media booth).

Of course, many familiar elements of the show will be back, often bigger than before. Petty observes that this year will see the growth of the Tail Tour promotions, as AHA is continuing its alliance with the Girl Scouts Council of Eastern Oklahoma. “The thing I love about that is that the vast majority of our Arabian horse owners are female, and typically the kids get involved with horses at 10 and younger,” he says. “Because of the demographics, the Girl Scouts are just super.” That goes hand-in-hand with some of the Arabian Horsemen’s Distress Fund activities. For several years, that organization has hosted fundraisers at the Nationals to benefit its cause, but each year it has increased its participation. Now it also works with the Tulsa Junior League in community outreach, some of which is to children. “We take horses to schools and to the Laura Dester Children’s Center (which is like a foster home for children), and we bring in a lot of children for the Tail Tours,” says

Becky Nash, who heads the AHDF’s Nationals activities. “Last year, we brought in 600 kids.” It isn’t all altruistic, she adds frankly. “The Junior League women are prime targets for buying and showing Arabian horses because they are open to hobbies and have expendable income.” And there are the familiar AHDF activities as well, although with a new twist. In the Pavilion on Wednesday evening, October 22, AHDF will be offering its second Sale and Stallion presentation. “This year we have 25 horses (10 stallions and 15 private treaty sale horses), a fun preview for people who are interested in buying a horse or breeding to a stallion. We have 10 ‘stallion bars,’ where stallion owners come up with their own stallion cocktail. If you want to make a donation, great, we’d really appreciate it, but it’s free and you’re welcome whether or not you do. “Then we’re doing our first Western Pleasure Pro/Am, a Calcutta,” she continues. “Each western pleasure team will consist of a professional, an amateur and a horse. It costs

Since opening in 1983, the Polo Grill Restaurant in Tulsa’s Utica Square has been attracting attention. Whether you’re looking for exquisite cuisine, expansive wine lists, inviting facilities, or impeccable service, it offers a unique dining experience. Proprietor/chef Robert Merrifield has been featured on the Food Network, by the James Beard Foundation as a “Rising Star of American Cuisine,” and named a “Celebrated Chef ” by the National Pork Producers Council. And not surprisingly, the Polo Grill has been recognized on local, regional and national levels. The press often refers to the restaurant as “the most awarded restaurant in Oklahoma,” and as such, it is the winner of the Wine Spectator Award for nine consecutive years, the Best of Award of Excellence for the past 11, and AAA Travel Guide has awarded the restaurant a Four Diamond rating for 11 consecutive years. Additionally, Polo Grill is the only restaurant in Oklahoma to become an award-winning member of the Distinguished Restaurants of North America (DiRoNA). Strongly motivated by the increasing expectations of local guests, as well as visiting guests from an increasingly wider geographic market, the Merrifields strive to offer only the best for all. For more information, go to www.pologrill.com.

- uTica square With quality stores, restaurants, and beautifully manicured gardens and trees, Utica Square, which opened in 1952, has a village-like design that stands in history as Tulsa’s first shopping center. It was developed to be inviting to the customer without alienating neighboring residents—a risky concept at the time. And since its purchase by Helmerich &amp; Payne in 1964, Utica Square has earned a reputation as the area’s finest shopping center. This can be attributed to their vested interest in the community. Mr. Helmerich felt that a high concentration of quality merchants would greatly improve the retail industry in Tulsa. Utica Square began to attract the best local merchants, as well as many popular national merchants. This dynamic mix proved to be the key to its success and is the reason why this trend continues today. Whether you’re a frequent shopper or visiting from out of town, you can’t help but be touched by Utica Square’s charm and beauty. The many clocks will remind you of times past, while the chimes reflect the songs of the season. And the garden’s bronze fountain and statue are favorites of the young and old alike. Utica Square promises a shopping experience like no other. uticasquare.com Volume 45, No. 4 | 75A

$250 to enter and the money goes to AHDF. To start, we do a random drawing, and the amateurs switch and are paired with another pro. The horses stay with the pros, though, so we have a short period of time for the professionals to show the amateurs how to ride the horses they’ve been paired with. Then the amateur rides the horse the first way and the pro rides it the second way, and our judges—Johnny Ryan, Mary Jane Brown and Bill Hughes—pick a winner, reserve and top ten. The winner and reserve get fantastic prizes, and the top ten receive several prizes also.

- BesT WesTern Plus Tulsa inn &amp; suiTes Located right off of I-44 and Highway 51, Best Western Plus Tulsa Inn &amp; Suites gives guests convenient access to the Tulsa Expo Center. Tulsa, Okla., hotels are known for their outstanding hospitality, and the Best Western Plus is a good example, from the warm welcome at check-in to the fast check-out. One of the most appreciated features at the Best Western Plus is its indoor pool, which offers a relaxing break from a busy day at the horse show, and like business travelers, horsemen are sure to appreciate the spacious rooms and luxury bedding. Tulsa, Okla., enjoys a variety of special events. The U.S. Nationals is just one of many center stage occasions that require the Best Western Plus’s special services. Other favorites include the Chili Bowl in January, the April and November Wannenmacher Gun Shows, and the September-October Tulsa State Fair, all held at nearby Tulsa Expo Square. bestwesternoklahoma.com/hotels/bestwestern-plus-tulsa-inn-and-suites

- anish hoTels GrouP Anish Hotels Group is a premier hotel management and development company based in northeastern Oklahoma, whose award-winning accommodations include Aloft, Fairfield Inn &amp; Suites, Hampton Inn &amp; Suites, Hilton Garden Inn, and La Quinta Inns &amp; Suites. Currently, it has properties in Tulsa, Bartlesville and Muskogee, but new developments are on the horizon. AHG was founded in 2008 by Andy Patel, and its dedicated staff and management work hard to live up to its motto, “Deliver Service Beyond Expectation.” At all of the hotels, the mission is provide a comfortable, positive experience that makes guests want to book a return a stay. Anish Hotel Group’s invitation to horsemen at this year’s U.S. Nationals? “Book with us to experience hospitality, the AHG way!” http://www.anishhotelsgroup.com/

“There’s another fun part too. When the amateurs are assigned to their new pros, we auction off each new team (winning bids benefit AHDF and are tax deductible). Whoever buys the winning team also wins a prize—this year, the usage of a villa in Italy for a week, thanks to Marikate Matthews.” Unfortunately, Nash notes, the AHDF already has learned of a worthy recipient for the proceeds of this year’s Pro/ Am: it will benefit 21-year-old Alexa Nichols, a youth and adult rider in Region 9 whose family has been involved in Arabians since the 1970s. Nichols, a promising double major at the University of Texas San Antonio, was left paralyzed by a recent automobile accident and faces extensive rehabilitation to reorient her life. And finally, AHDF will host its traditional fundraiser, the Wine Walk, sponsored by Markel Inc., one of the world leaders in equine insurance, and AHA. Scheduled for Friday night, October 24, at 5p.m., in the main aisle of the Ford Truck Barn, the Wine Walk features wine, hors d’oeuvres and live jazz—just the right social occasion to usher in the show’s closing weekend. n