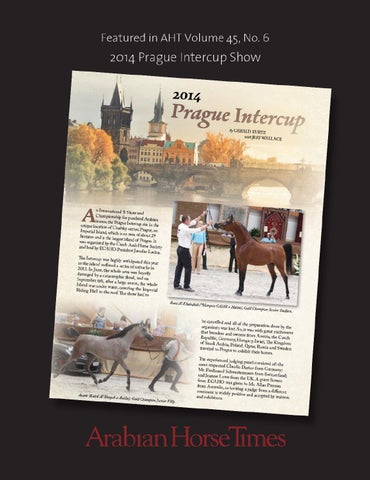 n International B Show and Championship for purebred Arabian horses, the Prague Intercup sits in the unique location of Císařský ostrov, Prague, on Imperial Island, which is an area of about 29 hectares and is the largest island of Prague. It was organized by the Czech Arab Horse Society and lead by ECAHO President Jaroslav Lacina. The Intercup was highly anticipated this year as the island suffered a series of setbacks in 2013. In June, the whole area was heavily damaged by a catastrophic flood, and on September 6th, after a large storm, the whole Island was under water, covering the Imperial Riding Hall to the roof. The show had to

be cancelled and all of the preparation done by the organizers was lost. So, it was with great excitement that breeders and owners from Austria, the Czech Republic, Germany, Hungary, Israel, The Kingdom of Saudi Arabia, Poland, Qatar, Russia and Sweden traveled to Prague to exhibit their horses.

The experienced judging panel consisted of: the most respected Claudia Darius from Germany; Mr. Ferdinand Schwestermann from Switzerland; and Joanne Lowe from the UK. A guest license from ECAHO was given to Mr. Allan Preston from Australia, as inviting a judge from a different continent is widely positive and accepted by trainers and exhibitors.

Starting with the Yearling Fillies, this class showed the highest density of quality from within the whole event. From the 10 fillies shown, five were by World Champion Kahil al Shaqab, with the first four places going to daughters of the stallion and fifth place to a Marwan al Shaqab daughter out of the great Pilar (Fawor x Pipi). Champion Filly went to Axara, out of Anilla (Pesal x Andaluzja), for breeder and owner Janów Podlaski Stud. A grey, refined filly with correct conformation and superb limbs, she won by a narrow margin of 0.09 of a point to her sister, second place filly Shilla, out of Szanta (Ekstern x Slonka), bred and owned by Falborek Arabians. The Two-Year-Old Filly class exhibited high quality as well. With careful judging, the Al Khalediah bred and owned filly Meshael al Khalediah, by El Palacio and out of Ghala al Khalediah (F Shammal x Robin K), was awarded champion and a well deserved 20 mark for Head. Second place went to the successfully shown young filly TM Pianistka, by TM Aikor and out of Passionata (Psynergy x Sibiria). Her pedigree, mostly of Russian bloodlines, made for a refined female type. Compared to the winner with a world-known parentage, TM Pianistka is surely a great breeding achievement. Three-Year-Old Fillies was won with solid points throughout all the judging criteria by the beautiful, balanced, light grey filly, Marilyn Monro Tersk, by the Amerian-bred stallion HK Marcello (by Marwan al Shaqab) and out of Monsterra, by Piligrim. Bred and owned by Tersk Stud— known for holding the best group of Arabian racing horses in Russia—there is now more focus on the showing aspect under new ownership. Second place went to the bay filly Marna, bred and owned by Sax Arabians from Germany.

The feminine and charismatic Bernadette, bred and owned by Janów Podlaski, and sired by Ganges, trotted her way into the hearts of the public and into the champion spot for Mares 4 to 6 Years of Age. Out of the exotic Gazal Al Shaqab daughter, Belgica, she woke up the crowed and won by a large margin. Second place went to Epasjonata, by Psytadel, another beautiful mare exhibited from Poland and owned by Mr. Parczewski of Best Arabians. She was just ahead of Esskhija Bint Esteema, by Khidar, bred and owned by Sax Arabians of Germany. Mares from 7 to 10 Years Old was completely in the hands of the Poland-bred mares. Janów Podlaski-bred mares Sefora, by Ekstern, followed by Pasterna, also a daughter of Ekstern and Pasya (Warchlarz x Passa) and owned by Suweco Stud from the Czech Republic, took champion and reserve respectively and were well deserved in a strong class. Third place was another Ekstern daughter by the name of Malaga, bred by Jamar Arabians in Belgium. Fourth

Yearling Colts rounded out the day. Having very masculine type for his young age and moving extremely well, Peon, by Kahil al Shaqab and out of Penta (Ecaho x Pepina), took home top honors for breeder and owner Janów Podlaski Stud. Second place went to the handsome HF Santiago de Magnifique, by Magic Magnifique and out of Gazalas Serina (Gazal al Shaqab x Bint Sacarina) for owner Heartfall Arabians of Sweden. 2-Year-Old Colts opened the show on Sunday morning. Martice, by Al Justice and out of Miss Marenga (Psytadel x Marenga), bred and owned by Sax Arabians, won one more time this year in front of Isrealy, by Eurogrant OZ (Ajman Moniscione), who was very successfully shown this year in Poland and is based at Bialka Stud of Poland. Athenaa (Ashhal Al Rayyan x ASS-Windi), Gold Champion Senior Mare. Volume 45, No. 6 | 197

place went to Bint Bessolea, full sister to World Champion Banderos, who was bred by Taylor Ranch, USA and is owned by Al Khaleidah Stables from Saudi Arabia. 11 Years and Older Mares was won by the classic Arabian mare Athenaa, by Ashhal Al Rayyan and out of ASS-Windi from Al Khalediah Stables. Without a doubt, at 12 years of age, she showed no signs of ageing and is as beautiful as she was when she won many major titles in Europe and the Middle East. Second to her was the well-known Psayada Bint Psyche, by Padrons Psyche and out of Zaneta. Bred in the UK, she is now owned by Sax Arabians. Next were the Stallions 4 to 6 Years Old. It was clear to the public and judges on the walk of all stallions together in the ring that the winner had to be Razi Al Khalediah. He is a son of *Marquis CAHR (by Marwan al Shaqab), who undefeated in 2014, has proven his legacy with beautiful offspring. Razi Al Khalediah is exotic with short a body, long legs, and tons of attitude and movement. In second place was Al Marid, bred by Czech breeder Holubec and owned by Sax Arabians of Germany. Only four competed in 7 Years and Older Stallions, and did they not disappoint. 2013 All Nations Cup Reserve Champion Palatino, son of Pesal and Palmeta took the Gold for Janów Podlaski Stud, followed by German National Champion Al Milan, by Al Lahab (Laheeb x HG The Vision), from Sax Arabians. The championships started right after lunch. With excellent catering throughout the show and Mr. Jaroslav Lacina hosting, it was an enjoyable time for all spectators, exhibitors and sponsors.

Unanimous Gold Champion Filly was Axara, by Kahil al Shaqab from Janów Podlaski Stud, Poland. With 2 votes each from the 4 judges panel, Silver Champion was awarded to Al Khalediah Stud’s Meshael Al Khalediah, by El Palacio, who garnered higher points in the class, while Shila, by Kahil Al Shaqab and owned by Falborek from Poland, got the Bronze. The Junior Colts Championship had numerous favorites, and when it was all said and done, Peon, by Kahil al Shaqab from Janów Podlaski Stud got the most votes and wound up with the Gold. Silver Champion was the exotic faced HF Santiago de Magnifique, from Heartfell Arabians, Sweden, and the Bronze Medal went to the wellbalanced Martice, owned by Sax Arabians. It was across the board agreement for Senior Champion Mares. By unanimous decision, Gold Champion went to Athenaa for Al Khalediah Stables, Saudi Arabia. Silver was also unanimous for Bernadette of Janów Podlaski Stud, Poland. The Bronze Champion title was between Sefora and Epasjonata, and in the end Sefora convinced the judges she was the one, and crowned a double success for Janów Podlaski Stud. The Stallion Championship was equally universal. Unanimous Gold went to Razi al Khalediah of Al Khalediah Stables and Silver, again by unanimous decision, was awarded to Palatino, by Pesal for Janów Podlaski Stud. The Bronze title was to be chosen between Al Milan and his son Al Marid, both from Sax Arabians. The youngster took it this time with 3 votes from 4 judges and Sax Arabians took home yet another bronze medal.