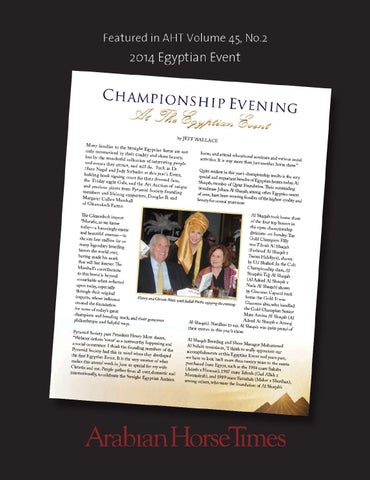 At The Egyptian Event by JEFF WALLACE Many familiar to the Straight Egyptian horse are not horse, and attend educational seminars and various social only mesmerized by their quality and sheer beauty, activities. It is way more than just another horse show.” but by the wonderful collection of interesting people and events they attract, and still do. Such as Dr. Quite evident in this year’s championship results is the very Hans Nagel and Judy Sirbasku at this year’s Event, special and important breeder of Egyptian horses today, Al holding book signing court for their devoted fans, Shaqab, member of Qatar Foundation. Their outstanding the Friday night Gala, and the Art Auction of unique broodmare Johara Al Shaqab, among other Egyptian mares and precious pieces from Pyramid Society founding of note, have been weaving families of the highest quality and members and lifelong supporters, Douglas B. and beauty for several years now. Margaret Cullen Marshall of Gleannloch Farms. Al Shaqab took home three of the four top honors in The Gleannloch import the open championship *Morafic, as we know divisions on Sunday. The today—a hauntingly exotic Gold Champion Filly and beautiful creature—is was Tibrah Al Shaqab the sire line stallion for so (Farhoud Al Shaqab x many legendary breeding Twom Hiddiyya), shown horses the world over, by Uri Shaked. In the Colt having made his mark Championship class, Al that will last forever. The Shaqab’s Tajj Al Shaqab Marshall’s contributions (Al Adeed Al Shaqab x to this breed is beyond Nada Al Shaqab) shown remarkable when reflected by Giacomo Capacci took upon today, especially home the Gold. It was through their original Giacomo also, who handled Henry and Christie Metz with Judith Forbis enjoying the evening. imports, whose influence the Gold Champion Senior created the foundation Mare Amina Al Shaqab (Al for some of today’s great Adeed Al Shaqab x Amwaj champions and breeding stock, and their generous Al Shaqab). Needless to say, Al Shaqab was quite proud of philanthropic and helpful ways. their entries in this year’s show. Pyramid Society past President Henry Metz shares, “Webster defines ‘event’ as a noteworthy happening and a social occurrence. I think the founding members of the Pyramid Society had this in mind when they developed the first Egyptian Event. It is the very essence of what makes this annual week in June so special for my wife Christie and me. People gather from all over, domestic and internationally, to celebrate the Straight Egyptian Arabian

Al Shaqab Breeding and Show Manager Mohammed Al Sulaiti reminisces, “I think to really appreciate our accomplishments at this Egyptian Event and years past, we have to look back more than twenty years to the mares purchased from Egypt, such as the 1984 mare Sahaba (Adeeb x Hasanat), 1987 mare Tebrah (Gad Allah x Montasirah), and 1989 mare Samahah (Maher x Sherihan), among others, who were the foundation of Al Shaqab’s

supersuper job of this gorgeous stallion! BahaBaha moved jobshowing of showing this gorgeous stallion! moved beautifully, and his was animated, yet so beautifully, andstand-up his stand-up was animated, yetnatural so natural and ‘unstressed’! I loveI love to see horse shown that that way!” and ‘unstressed’! toasee a horse shown way!”

Aharony and Rami Vaknin on this amazing win. As if that wasn’t enough excitement for one day, later that evening my very first grandchild, Grayson Dallas, was born at home in California. Needless to say, it was a magical twenty-four hours for all of us!” Championship day, once again, did not disappoint. Lots of new enthusiasts were at this year’s event as well as longtime contributors. Seeing Judith Forbis presenting awards and accolades to participants surely brought up many memories of personal past experiences, or of her dedicated and countless contributions to the Straight Egyptian Arabian. Anyone fortunate enough to walk the mare pastures at Ansata with Judy in tow, and witness all the beauty, know

of her horses that sit in the pedigrees of today’s top winners in the world of the Egyptian Arabian horse. Inga Applequist ties it all up perfectly in saying, “As I watched Baha AA showing for the gold in the stallion championship, I was lucky enough to be seated next to Rhita McNair, and listen to her tell me about the many Gleannloch greats that she has known and shown in her lifetime. The juxtaposition of then and now made a very special day even more special. I love the Egyptian horse and all of the great people too!” Then and now. All one in the same, and all so very important to the Egyptian Arabian horse. n