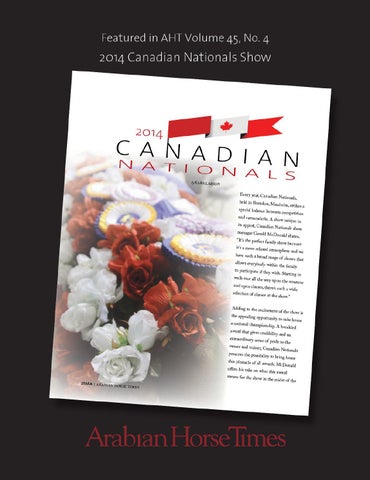 held in Brandon, Manitoba, strikes a special balance between competition and camaraderie. A show unique in

“It’s the perfect family show because

it’s a more relaxed atmosphere and we

to participate if they wish. Starting in

walk-trot all the way up to the amateur and open classes, there’s such a wide selection of classes at the show.”

Adding to the excitement of the show is the appealing opportunity to take home a national championship. A heralded award that gives credibility and an

extraordinary sense of pride to the

this pinnacle of all awards. McDonald offers his take on what this award

A BEAUTIFUL TURNOUT IN BRANDON quality and depth of competition. “I look

important show for our country. A national

championship here is a great award to strive for. It’s an award that certainly takes some effort and some work, especially when

you have numerous classes that are very

One of these lucky winners was DeCarol Williamson, owner of champion stallion DA Prodigy. On this win, DeCarol shares, “I was not only proud of Prodigy, but the reserve champion was sired by DA Valentino, a full brother of Prodigy. So, we bred the champion and the sire of the reserve champion as well.” Talking about Prodigy outside of the show ring, Williamson shares a story about how Sage Sellman, trainer Andy Sellman’s daughter, posed with the stallion after his Canadian win, giving him treats and affection. “He’s an amazing horse— everybody loves him. He’s very athletic, has such a wonderful mind, and he’s such a ham. Not to mention, he’s completely trustworthy. I mean, how many stallions would a trainer allow their kid to stand next to and get a picture with?” In attaining this championship, the next step of Prodigy’s career comes in the babies he is producing. “I wanted everyone to have the chance to see him in the show ring and for him to get a big win under his belt. I know that he’s not lacking in quality as an individual, but now that he’s been national champion, he has shown the world that he has quality and 220AA | A R A BI A N HOR SE T I MES

correctness—he’s established himself in his own right. Now, there’s no need to keep on winning prizes; it is now about what he produces.” The champion mare, Valentino’s Angel MI is owned by Al Mohamadia Stud, a farm very pleased with their big win in the north. International judge and longtime breeder Bruce McCrea offers, “Al Mohamadia is very excited about Valentino’s Angel MI’s unanimous Canadian National Champion Mare win! She is truly an amazing young mare with incredible type and charisma! Andy Sellman and his Argent team have done an outstanding job with her. We are looking forward to the U.S. Nationals.” Beyond the chance to take home a big prize, Canadian Nationals runs on the fuel of good attitudes and companionship. Someone who understands the heart of the cordial Canadian way is Murray Popplewell of Rae-Dawn Arabians. He shares, “The city is friendly and the competition is great. It is truly Canadian in the fact that it includes everyone from juniors and amateurs to the professionals. And in the classes as well, as it ranges from the Arabian park class, Volume 45, No. 4 | 221AA

to sport horse classes; and everyone mixes together. That is what our country is all about—including everyone.” With his own farm in mind, Popplewell was most impressed by the level of competition in the halter classes. “Of course, our halter competitions were the best. It is always good to hang a close top ten to champions such as Shada and Argent Farms. But the biggest highlights at this show for us came from our breeding program that hit the performance ring in style. RD Nevaska was two-time National Champion with owner Sheryl Yochum and Bey Ambition’s son RD Habanero enjoyed his first national championship in a professional performance class. He was Canadian National Champion Western Pleasure Junior Horse for owner Barrie Padgham and ridden by LaRae Fletcher-Powell. He certainly proves there is life after halter and acts as a tribute to our trainer Claudinei Machado.” Another big part of the success and positivity surrounding the show comes with the environment in which it is held. Vicki Humphrey, a 2014 judge, shares her thoughts on Brandon and the Keystone Center where the show is held. “The facility is 222AA | A R A BI A N HOR SE T I MES

really cool. To have both your hotel and horses in the same complex, seconds from the show ring—it’s pretty fun. It is a great place and a good time to show. Being a judge this year, it made me want to show!” Vicki adds, “It was fun the way they mixed classes, so the English panel got to judge some western classes as well. And for the halter, they were scheduled, so we drew from a hat to determine who would judge, which was pretty fun and interesting.” Another halter winner and heartwarming story comes from Ann Benson, owner of Arabian stallion Maasai PVF. The day before her final with her prized stallion, Ann and Maasai had a special visitor at the farrier. “Having the Monarch butterfly spend time with Maasai the day before my class served as an omen to me that “orange” would be the hot ticket in my class. To quote M. Ali, I did “float like a butterfly and sting like a bee.” It was a thrill and verification of our breeding program—a small breeder’s efforts were recognized. The great staff at Shada served as my “team orange” support. They were in my corner all the way, and couldn’t have done it without them.” Volume 45, No. 4 | 223AA

Moving into the performance ring, an uncommon occurrence surfaced in the winners of four purebred and Half-Arabian English classes. As the owner of the purebred and HalfArabian open and amateur English winning horses, Terrie Larson brought home four trophies with two very special English horses. “Watching our boys in the ring was truly the best part of the entire week! Ames Celebration and Extreme Hearthrobb (aka Bill Murray) were amazing to watch! When Leah Beth Golladay came in the ring with Celebration, I couldn’t take my eyes off them. He is so athletic and performs like a sports car—always on the go! The last class of the show was the Half-Arabian English with John Golladay and Bill Murray. It was an amazing ride!” Larson continues, “Although we brought home the roses in both purebred and Half-Arabian English Pleasure Amateur and Open with our boys, it’s not all about winning. It’s about what I have always believed in—you work hard in life, and with patience, good things will come. We all dream about roses, and in Canada this year our dream came true! We owe a big thank you to all involved—the caretakers at home, and trainers, John and Leah Beth Golladay.” 224AA | A R A BI A N HOR SE T I MES

Every big horse show is filled with little stories of triumph. This year in Brandon, the Arabian community united around Terri Budd as she rode to a national top ten in Arabian Ladies Side Saddle Open. “It was great to show; I missed showing and it gave me a goal to work towards. I would like to thank Carol Johnson for asking me to show her great horse Vikktor. It is great to have such support from the Arabian community—it really meant a lot to me thank you everyone.” On the show in general, Terri adds, “Canadian Nationals is always a great show; it’s laid back, but there is great and tough competition. It’s nice to see great friends that you don’t see all year. It’s also great to take new clients to experience the great competition. The Canadian National Committee always makes you feel welcome.” A show built on enthusiasm, support, community, horsemanship, and quality, the 2014 Canadian Nationals proved to be one of the top events offered to the Arabian horse community. As usual,

the Canadians welcomed all with enthusiasm and community support. Ann Benson shares, “Showing in Canada is always a great time—it is a national show with a friendly, relaxed atmosphere. The schedule allows for time with friends and new acquaintances. There is always plenty of staff to meet your needs and help is available when needed. The great weather we had was a bonus.” Now that the 2014 Canadian Nationals is merely a memory, McDonald reflects on the success of the show. “Everyone seemed to be really happy this year. There were different trainers and a lot of first time people who really enjoyed themselves and said they would be back, so that was very positive feedback from the exhibitors. So, overall, the show was a great success; lots of people were very pleased.” McDonald adds, “Canadian Nationals is a fun show and we certainly appreciate all the exhibitors coming to the show and making it what it is. We look forward to people returning in the future.” ■ Volume 45, No. 4 | 225AA

SNAPSHOTS FROM THE READERS ...