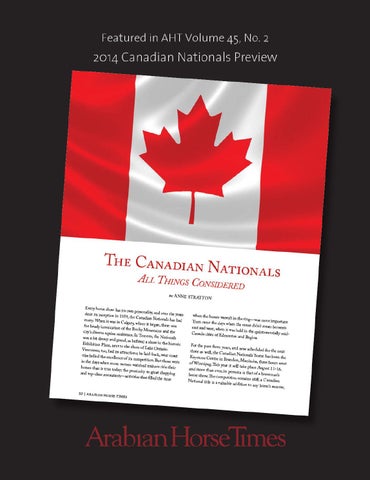 The Canadian Nationals All Things Considered by ANNE STRATTON

Every horse show has its own personality, and over the years since its inception in 1959, the Canadian Nationals has had many. When it was in Calgary, where it began, there was the heady intoxication of the Rocky Mountains and the city’s diverse equine ambience. In Toronto, the Nationals was a bit dressy and grand, as befitted a show in the historic Exhibition Place, next to the shore of Lake Ontario. Vancouver, too, had its attractions; its laid-back, west coast vibe belied the excellence of its competition. But those were in the days when more owners watched trainers ride their horses than is true today; the proximity to great shopping and top-class restaurants—activities that filled the time

when the horses weren’t in the ring—was more important. Then came the days when the event didn’t rotate between east and west, when it was held in the quintessentially midCanada cities of Edmonton and Regina. For the past three years, and now scheduled for the next three as well, the Canadian Nationals’ home has been the Keystone Centre in Brandon, Manitoba, three hours west of Winnipeg. This year it will take place August 11-16, and more than ever, its persona is that of a horseman’s horse show. The competition remains stiff; a Canadian National title is a valuable addition to any horse’s resume,

so trailers and big rigs roll in from as far away as Florida and California. But the focus now is not the destination. It is solely on the horse show, the classes in the ring, the 750 to 800 horses vying for ribbons and trophies in 187 classes. “Our numbers have increased every year in terms of horse participation,” says Allan Ehrlick, Vice Chairman of the Canadian National Show Commission. “People are comfortable there. Brandon has about 45,000 people and it has a tremendous amount of amenities for a small town—a ton of restaurants, lumber outlets that farms need for their stall decorations, a lot of fast food, plenty of hotel space, everything needed for a show. There’s no acclimatization (we’re not in the mountains), you can drink the water and breathe the air. You can go to dinner anywhere and walk up and down the streets without being scared, which is important. It’s an exceptional comfort zone. And nowhere in Brandon is more than 10 minutes from everywhere else. It’s very accessible. It has the amenities to allow you to show your horse as well as possible.” Keystone Centre’s attitude also is refreshing. “There is a sign in every building that says ‘Agriculture First,’” Ehrlick notes. “Right off the bat, you know that they’re happy to deal with your product because that’s what they’re designed for. And the staff that they have there is absolutely fabulous. They’re very accommodating, very talented. When you need something done in a hurry, they do it and their attitude is very, very positive.” It doesn’t hurt that Ring 2 is a dedicated horse arena, designed and maintained for horse performances all year, not constantly changed to accommodate everything from rock bands to motocross. Although every show evolves, the Canadian Nationals has been so well organized that this year the “major” changes relate only to refining the competition for two of the show’s divisions. The Sport Horse In-Hand classes have been divided into dressage type and hunter type, reflecting the growing development of that segment of the breed, and the working western classes will all take place during the opening three days of the show, saving that contingent the expense of remaining throughout the week.