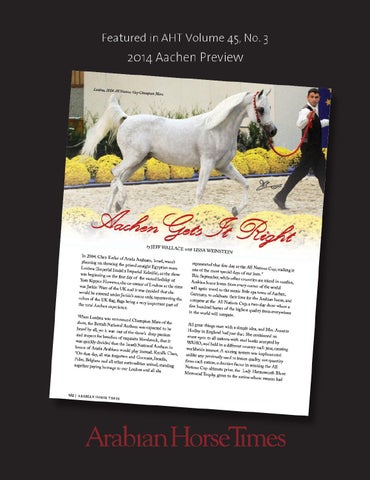 AachenGets It Right by JEFF WALLACE with LISSA WEINSTEIN In 2004, Chen Kedar of Ariela Arabians, Israel, wasn’t planning on showing the prized straight Egyptian mare Loubna (Imperial Imdal x Imperial Kalatifa), as the show was beginning on the first day of the sacred holiday of Yom Kippur. However, the co-owner of Loubna at the time was Jackie Ware of the UK and it was decided that she would be entered under Jackie’s name only, representing the colors of the UK flag, flags being a very important part of the total Aachen experience.

represented that fine day at the All Nations Cup, making it one of the most special days of our lives.” This September, while other countries are mired in conflict, Arabian horse lovers from every corner of the world will again travel to the scenic little spa town of Aachen, Germany, to celebrate their love for the Arabian horse, and compete at the All Nations Cup, a two-day show where a few hundred horses of the highest quality from everywhere in the world will compete.

When Loubna was announced Champion Mare of the show, the British National Anthem was expected to be heard by all, yet it was out of the show’s deep passion and respect for breeders of exquisite bloodstock, that it was quickly decided that the Israeli National Anthem in honor of Ariela Arabians would play instead. Recalls Chen, “On that day, all was forgotten and Germans, Israelis, Poles, Belgians and all other nationalities united, standing together paying homage to our Loubna and all she

All great things start with a simple idea, and Mrs. Annette Hedley in England had just that. She envisioned an event open to all nations with stud books accepted by WAHO, and held in a different country each year, creating worldwide interest. A scoring system was implemented unlike any previously used to insure quality, not quantity from each nation, a decisive factor in winning the All Nations Cup ultimate prize, the Lady Harmsworth Blunt Memorial Trophy, given to the nation whose owners had

the most prize winners. Aachen also awards championship ribbons in halter divisions, as well as a special All Nations Cup Breeder’s Trophy, given to the nation that breeds the most prize winners. Rightly so, the esteem that breeders feel for the Aachen show is worldwide. The first All Nations Cup show was held in England in 1980, and the following years in Spain, Sweden, and returning again to England with great success, before the newly founded Nations Cup Committee entrusted the reins to the German Arabian Society in 1984. In 1985, Aachen hosted its first All Nations Cup with eleven nations competing. Holland was the ultimate winner with Poland and Germany closely behind. In 1987, a decision was made for Aachen to permanently host the All Nations Cup and the rest is history. In 2014 competitors from some 25 nations will vie for the coveted prizes. Considered by many to certainly be one of the very best shows in all of Europe, the Aachen Committee shows they know a little something about entertainment. While other shows may struggle to get attendance numbers up, the people that put Aachen together have created a high quality, enjoyable show that people travel to year after year, and that has strong support from the local community. Simply put, the people at Aachen get it right.

just a riding arena, but the stands are packed. They always play the special Aachen song before every class; it’s a kind of marching song and it creates so much energy and excitement when the horses come trotting in to the music. And there’s never really a bad horse that shows in the ring. Every horse competing here is the best of the best.” Om El Arab has bred numerous Aachen champions, including El Masra (Shaker El Masri x Estasha), the first Junior Female winner, and Bint El Shaklan (El Shaklan x Estawa). Merz also recalls when WH Justice (Magnum Psyche x Vona Sher-Renea) came into the ring. “He was the quintessential Aachen horse. He was so beautiful; he owned the ring. He was ethereal … big … macho. Everyone in the stands was cheering for him. People were crying.” People also speak with great pride when winning at Aachen. Jean and Alen Mattens, a former president of the BAHS (Belgian Arabian Horse Society) and current members, have been showing at Aachen since the show

So what makes Aachen so special? Though only two days long, Aachen seems to have just the right mix of great competition and entertainment. When one refers to Aachen, they usually comment on the intimate atmosphere, the great catered food, the easy walk to local inns, and a relaxed show schedule which both starts and finishes at reasonable hours so friends can get together for breakfast in the morning, and dinner in the evening. Of course, adding to the list would be legendary moments such as Michalow Stud’s Emigrantka’s (*Eukaliptus x Emigracja) startling and stunning entrance that completely brought the house down, along with the dazzle of an older Kubinec (Balaton x Kosmetika), and so on. As Janina Merz of Om El Arab relates, “There is an energy at Aachen that is just unbeatable. Aachen is small—it’s

began. “Paris has the big name, but at Aachen, the quality is super, super, super—the best quality you can find anywhere in Europe!” The Mattens won Champion Mare in 1993 at Aachen with the exquisitely Janow-bred mare Aldara (Probat x Arra). “Aldara was an especially feminine mare. She looked like a real doll. Polish with very big eyes, but fiery; she showed big. At the time she was competing at Aachen against all the other great Polish horses from the Polish State Studs, and I just thought, ‘Is it possible she will win?’ And she did—she actually won.” Michael Byatt, of Michael Byatt Arabians, shares, “Two special memories come to mind when I think of Aachen. One, being the stallion Medalj (*Menes x Sadza). When I showed him for Hans and Cecilia Boughardt, few

stallions that I had ever led exhibited such authority and ownership of the arena as Medalj did on that day. In those days, the crowd supported whatever horse they liked, it was not as partisan as today. If they liked a horse, they were very vocal. And the noise was deafening. Madalj bowed up, snorted, blew, looked up into the stands and snorted even louder. He won champion and helped Sweden win the Nations Cup. The second, as one would expect, was Marwan Al Shaqab (Gazal Al Shaqab x Little Liza Fame). My connection and love for that horse is, and was unequaled. With him it was never so much about winning, although that was very important, as it was having him being bestowed the honor and respect he had earned. Being champion at Aachen was the continuation of his legacy.”

The show has also inspired the way Americans think about creating a successful horse show in the States, and it was at an Aachen show that American breeders first conceptualized creating something similar in Las Vegas. Bob Boggs, one of the founding members of the Arabian Breeder’s World Cup in Las Vegas, says, “Vegas has everything to do with Aachen.” He remembers when Carol Steppe, Jeff Sloan, Scott Bailey and he came together to bring this style of judging to the States. They wondered whether the Americans were up for it. “Aachen is a very uplifting show. It’s a breeder’s show. The competition at Aachen is just very tough. You get to see horses from all over the world. It’s also very social and that’s a big part of its success. There are also hotels close enough to walk to and it’s an easy distance to go out at night to eat and be social. In these ways, Vegas is similar to Aachen.” Yet over the course of 34 years, the show has grown and changed in important ways. Breeders such as James Swaenepoel of past Aachen winners FM Gloriaa (WH Justice x Psity of Angels) and SA Misha Apal (A.S. Natsir-Apal x Nyara JC), and founder of the Arabian Futurity Europe Organization, discusses the latest trend in judging at Aachen—away from movement with increased focus on type. “We feel that the judges are less critical on the technical movements. Horses are prettier every year!” This same sentiment is voiced by Merz and Mattens.

Merz again, “The emphasis in the past was on animation, it made for more excitement and the horses more like an athlete. People in the stands were up on their feet cheering. With that changing a little, the horse has become less an athlete. Now the focus is leaning more and more toward the hard stand, like in America, and less on the trot.” Mattens, however, cautions, “The stallions are becoming a little too feminine in the head at Aachen. It’s very important that a mare should be a mare, and a stallion should be a stallion.” Bob Boggs, whose stallion Psytadel (Padrons Psyche x Bint Bey Shah) was sold to Swatam Arabians and has subsequently had a major impact on the European show ring as a sire, says, “Aachen has changed over the years. Some say it’s more corporate, others, that European handlers have admired and taken up the stand-up style of showing halter horses, so the trot has gone away … but the show has progressed in almost every way.” The Aachen focus is creating an event that is irresistible to the public and touches the attendee’s heart and soul making them think: “I want an Arabian horse!” and they certainly seem to have succeeded. So you see, Aachen and the All Nations Cup has not only achieved greatness, but has now become the model show for pure enjoyment all around the globe. Let all flags proudly fly high. n