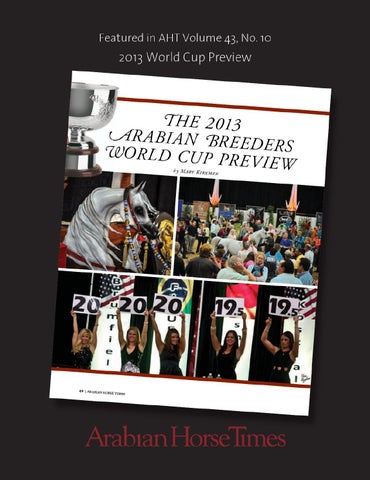 n 2007, when the Arabian Horse Breeders Alliance inaugurated its World Cup Show, one of its goals was to attract international participation—and in a stunningly short time, it was successful. It is now as much a fixture on global Arabian horse calendars as it is in North America. This year’s edition will be April 18-21, 2013, at the South Point Equestrian Center in Las Vegas, and for its organizers, the challenge at this point is just meeting the high expectations of their supporters. So, while the popular framework of the show remains the same, each year sees change and innovation.

Judging The Championships This year, one “tweak” is in the selection of champions. In the past, all the classes except the supreme championships have been tabulated using numerical scores, and that practice will continue. In Sunday’s finals, however, the judges selected their winners by comparison, with the Gold Champion in each event required to come from “the first row,” the winners of the previous classes. Beginning in 2013, the judges will have the option of considering all the horses competing in each supreme championship for Gold Champion when conferring the Sunday titles. “We felt that in a system like ours, especially since we have different judges judging each class and then they all come back in the championships, it was only fair to take a fresh look at the whole class,” explains Scott Bailey, a member of AHBA’s Board of Directors. The idea is that the previous days are all about the breeding classes, using the scoring system to evaluate the horses as individuals against an ideal, with the result a selection of the most qualified competitors for the finals on Sunday. “The championship day should be new,” he says, “and nobody should anticipate who’s going to be winning.” It is true, he adds, that conformation does not change, but movement and attitude might, which could alter the complexion of the class, especially if the decision between the top two horses in a preliminary was a close one. In years past, the biggest titles sometimes became predictable.

“When you know that the champion is going to come from the first row,” he says, “and you knock out that second place horse who might have been almost equal with the first horse, then very often it’s obvious who is going into the championship with an advantage. This way, it is especially exciting because the crowd cannot necessarily predict who the champions will be. Let’s have a horse show and let’s have a good time!”

The Legacy yearLing FuTuriTy cLasses The other new development in 2013 is the introduction of the Legacy Yearling Futurity classes. When the ABHA Futurity was begun five years ago, entries were limited to two per nominated stallion, one from a breeding purchased at the AHBA Vegas Stallion Service Auction and one nominated by the stallion owner. This year will see the new Legacy Futurity, which is open to any foal by a nominated stallion, so long as the foal was nominated by December 31 of the year of its breeding. The Legacy Futurity is for amateur handlers only. “It is similar to the Scottsdale Signature program,” says AHBA Board Member Bob North, but notes that there are significant differences as well. This year, the Legacy colts and fillies will show in the same classes as the regular amateur-to-handle yearlings. “Because we use a point system, it’s easy to rank every horse in that class from first to last, and then we will award separate prizes. The yearling that wins the class may or may not be a Legacy horse. If it is, then it will get two sets of trophies and ribbons,

one for the regular class and one for the Legacy class. Or, let’s say the highest-scoring Legacy horse turns out to be second in the class; that horse would get a second place ribbon for the regular class, and the champion ribbon and money associated with the Legacy program.” This year, North says, prize money of approximately $12,000 to $15,000 will be available in each of the two classes. Next year, plans call for Legacy classes with essentially the same payouts to be on the schedule for 2-year-olds. And since the 2013 figures are based on the 150 mare nominations ABHA received a year and half ago, when the program was announced, they are expected to rise as the program gains in popularity. “What is really exciting is that when you have a vision and you execute it, you really don’t know when you set out whether or not it’s going to work,” observes Jeff Sloan, Chairman of the AHBA Board of Directors. “The exciting part of the Vegas show is that it worked—people come from all over the world. It means something to win a title at the World Cup.” ■