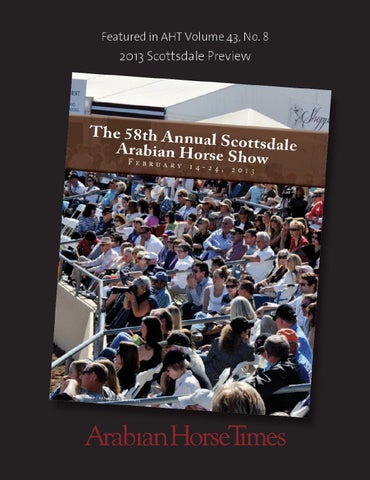 Where To Begin? The Scottsdale Arabian and Half-Arabian Horse Show has

become a life experience. Since its modest beginnings at the

Arizona Biltmore in 1955, the Scottsdale Show has grown into the world’s largest, richest equine competition, and definitely

one of its most prestigious. Every February, breeders, owners, exhibitors, trainers and spectators join Arabian horse fanciers from all over the world, f locking to Scottsdale to enjoy a

spectacle that is unlike any other. And this year, Scottsdale has 100 more horses entered than they did last year!

the event’s largest gate, ever. Vendors long ago foresaw that

colossal marketing and sales opportunities like this one rarely

occur. Thus, “We have more than 300 commercial exhibitors,” says AHAA staffer Rita Lathrop. “We’re up on the number of corporate and other commercial vendors this year. We have a

waiting list of over 100 commercial exhibitors and a 98 per cent return rate. Many of our vendors have been coming to the show

for decades, so each year’s show is like a family reunion.” Lathrop smiles. This will be her 17th year with the Scottsdale Show.

An amateur group from the AHAA also comes out and helps with barn tours.” Barn tours are only one of the creative features AHAA members have conceived. “We had more than 2,500 people going on barn tours last year.” More about them later.

What’s new under the Arizona sun? “We are really excited about several things,” replies AHAA Executive Director Taryl O’Shea. “WestWorld has made many improvements; they have built this facility to meet our needs. The South Tent is being transformed into the South Hall, a permanent structure, and the North Tent will also become a permanent structure. The Equidome has been redesigned and is now enclosed, heated and cooled, with great lighting, and the seats have been reconfigured and will be more much comfortable than the old seats and bleachers, seating 4,000. “This is a $45 million project,” explains AHAA President Jay Allen. the building began in October. We will have some growing pains, but only for one year. When they get everything finished in 2014, this will be the best show facility imaginable, and they are building the facility around us and our needs. We just signed a new, 20-year contract.”

Sshameless About Adding Prize Money “Sshameless, who has presented the flag at opening ceremonies the final weekend with his owner, Lisa Shover, is the new Breyer Arabian

horse, sharing the stage with other great stallions etched in Breyer history such as Khemosabi, Huckleberry Bey and Thee Desperado. The public will have a chance to meet Sshameless, a multiple halter and open and amateur western pleasure national champion who received the 2012 Arabian Ambassador Award. Well known for his gentle, kind temperament, Sshameless will be 21 in March. “Sshameless is a great ambassador for the breed because he shows the ability of the breed, for a high-powered show stallion to let down and be a friend and companion. And that’s our main goal.” “We have kicked up the prize money in the Scottsdale Signature Stallion classes with Jackpot classes for mares 4 and over, stallions 4 and over, and geldings 4 and over,” notes AHAA President Jay Allen. “We have added money in the performance classes, too.” “Prize monies this year will be well over $1 million,” O’Shea continues. “We are happy to say that this year’s Scottsdale Signature Stallion classes will be paying $590,598.82, with the addition of the halter Jackpot classes for every Scottsdale Signature Stallion offspring, four years old or older that has ever been entered in an SSS class here.” “We also took a good look at our payouts and entry fees, and we have added more money, and standardized

our entry fees for purebreds and Half-Arabians,” O’Shea explains. “We have expanded the amateur owner classes in several of the most popular divisions. This will offer people who ship their horses in from other states the chance to show their horses in a few more classes, which makes a little more sense than bringing a horse hundreds or thousands of miles, to show in only one class. “Schneider’s has partnered with us, to offer championship coolers for all the youth classes, and people can watch the show stream live on our website through I Equine.

Lives of Their Own

as the art form it is. Watch for reining legend Lee Mancini and his newbie, AHAA Executive Director Taryl O’Shea, as one of this year’s teams. If you last exhibited at Scottsdale 20 years ago and haven’t been there since, you may find yourself frustrated by your inability to be in two or three places at once. WestWorld now has not only the Equidome and Wendell Arenas to scamper between, but you also have the Wells Fargo Advisors Arena 5, the Markel Insurance Arenas 6 and 7 (A and B), and Arena 8, where the cutting classes take place. We aren’t kidding about the need for comfortable shoes.

The Scottsdale Signature Stallion program has taken on a life of its own. Introduced in 2003 and distinguished by its rich paybacks, the program has experienced phenomenal growth every year. The SSS Auction, in which participating stallions’ services are auctioned, provides the financial support and incentive for the following year’s classes. Reining, too, has skyrocketed at Scottsdale. The Half-Arabian Reining Futurity debuted at Scottsdale in 2005, and identical classes and prize monies were added for purebreds in 2006. Each year has seen expanded offerings for horses and riders. Eleven days of world class reining is a far cry from earlier days, when all but a few of the horses and riders participating were earnest, but seriously inept. Sunday morning, February 24’s final two reining classes are the Arabian Reining Non-Pro Derby, followed by the HalfArabian/Anglo-Arabian Non-Pro Derby. Monday, February 18, will feature the Wells Fargo Advisors Invitational Celebrity Slide in Arena 5. Each team consists of a professional reining trainer and a volunteer, amateur or professional, whose expertise lies in another discipline, perhaps halter, English, driving or dressage. Beforehand, the reining professional coaches the newbie in the subtleties of reining

people a behind-the-scenes glimpse of what we do. On a slow day we have 150 people; on a heavier day, when we get 200 to 300 people, we have to split them into two groups.” Debbie Fleming also coordinates another popular activity: the Round Pen Demonstrations. These interesting, always well-attended presentations reflect the AHAA’s commitment to education. Each year four clinicians demonstrate and explain their particular specialties to the public. “Bob Leary demonstrates the four natural training aids,” explains Fleming. “He is the Head Coach and founder of Arizona State University’s Western Equestrian team, and a leading instructor at Scottsdale Community College’s equine program. Leary teaches riders how to utilize the four natural training aids, a method that allows riders to control their horses, raise their confidence and make them safer, more competent riders. “Regardless of your discipline, Lee Smith can help you raise your level of performance by becoming a partner with your horse and working together in harmony. Smith helps you develop your horsemanship skills through feel, timing, balance, and an understanding of equine psychology.

Tour A Barn, Get Educated, Paint A Pony, Meet A Horse The show will be packed with free events designed to appeal not only to horse people, but to the throngs of non-horse families that come to the event in numbers approaching 300,000, give or take. Debbie Fleming is in charge of the ‘Behind the Scenes Barn Tours’. “The barn tours have become one of our most popular activities,” she begins. “We’re on the local television news, and in Valley newspapers. One day the second weekend, over 300 people took the tour. That was a sight to see! Tours will be at 10:00 am and 2:00 pm on specified days.” “The barn tours have definitely been a success,” adds Jay Allen. “They are very educational, giving

“Sgt. West Brown, with the Scottsdale Mounted Police Unit, will demonstrate some of the police techniques the mounted officers use, training methods to ready their horses for street and crowd control, and how to safely, easily load your horse in a trailer. “Philipp Kast and partner Jill Loskil will demonstrate Sport Horse basics, focusing on the rules of Sport Horse classes, the proper tack, what the judges are looking for, and preparing the horse for the class.” A fifth educational presentation will be the eyeD™ Iris Scan Technology for Horses, which eliminates the need for branding or tattooing, because like fingerprints, no two irises are alike, iris scanning is the most accurate equine ID method. Scottsdale has long featured activities designed to create wonderful memories. The ‘Paint-A-Pony’ activity for

children allows them to take their painted models home with them, and the popular ‘Meet-a-Horse’ program allows visitors to meet, pet, and have their picture taken on an Arabian arrayed in native costume. The photos go home with them, as well.

The Young and the Restless Shoppers Rory O’ Neill is head wrangler for the AHAA Youth Club. “I’m excited to work with these kids because they are self-motivated, fun, and good horseman. They school and help train their own horses, clean stalls; they are true ‘worker bees’. “They are in the paddocks, selling rose garlands to the championship class winners. They make all the calls, which gives them life experiences about success and failure. Selling is a good life skill, and they learn not to take it personally when they get a ‘No, thanks.’ “Their youth party will be held in Arena 3, with food, music, bouncy house, and games for all ages. The youth rent everything, and arrange, staff, coordinate and execute the party themselves. These kids come from all walks of life; they’re all ages and all backgrounds, and they are good souls. Their exposure to the horses makes them more mature, and there aren’t a lot of big egos. They appreciate what they have.” The Scottsdale Show’s shopping expo holds something for everyone, for any budget. Show goers can hardly wait to browse through the exhibits, where they will find a dazzling assortment of unusual products and services they may never have seen elsewhere.

are wonderful to work with. The March of Dimes provides hundreds of volunteers for our show.

“Cox Charities has a little different approach to

charities. They have huge interaction (in donations) with their employees, plus what the show donates. The money goes to various charities. In May,

Cox Charities, and they selected 10 applications;

$32,000 was distributed to various organizations.

Throughout the year, AHAA makes donations based on presentations to the Board; last year we gave

more than $100,000 to the community at large. “We have a wonderful relationship with Cox Communications,” Beethe adds. “We donate to their charities, and we share their media

commercials for the show, an excellent 30-minute promo that runs on local television, and so

forth. All of our donations are based on what is in the best interests of the Arabian horse.”

The foregoing only begins to hint at the tremendous sense of community the Arabian horse inspires in AHAA, and in everyone connected, even

remotely, with the Scottsdale Arabian Horse

Show. And community is perhaps the greatest

The event’s food court is always an adventure, as well. Be sure to sample the Indian fry bread, the many international offerings, an irresistible barbecue sandwich or a delicious Mexican spread. Mary Beethe is AHAA’s liaison with the show’s two main charities: The March of Dimes and Cox Charities. “Cox Charities is part of Cox Communications,” she explains. “Both charities