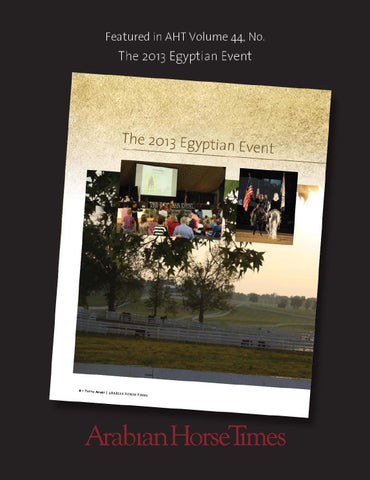 by Mary Kirkman What do you say that is new about the Egyptian Event? For the 33 years that it has anchored the first week in June at the Kentucky Horse Park, the story has been the same: people love it. But that in itself presents a problem. How does the Pyramid Society, which puts the show on, make it better—or at least keep it fresh? “Our horses do that,” says Anna Bishop, the Society’s longtime executive director. That’s not a pat answer, she adds. The fact is, most of their dedicated following is there for the horses, despite the Event’s formidable reputation as a social event with extensive educational opportunities. “We build everything in such a way that it enhances the opportunity to showcase those horses.” Over the years, breed veterans say, the Egyptian Event has enjoyed a unique history. In the 1980s, it was a splashy, must-do stop for far more than just Egyptian breeders. Then, when the horse industry contracted in financial downturns, many regarded the horse show as the exclusive domain of those with Anna Bishop Egyptian programs. But over the past decade, as the breed has become more internationally oriented, its crowd has grown eclectic; the Event is front and center again on the world stage. The main draw, as Bishop says, is the horses. But beyond that, the Event from its earliest days has been known as one of the most charming and enjoyable shows of the year. Some of it, says Shawn Crews, General Manager at Arabians Ltd., in Waco, Tex., is the ambiance of the Horse Park. “It’s just magical,” she says. “We probably had about 150 clients there, and they’re there to have a great time and enjoy each other. It’s like a family reunion.” Then there is its renewed presence in the mainstream market. “It’s truly an international event, with international attendance—international ownership and competitors—every single year,” offers Michael Wilson, who operates Wilson Training Center with his wife, Peri, in Tavares, Fla. “Horses are selling at the Egyptian Event, no matter what the economy is doing. It’s a real deal.”

raymond mazzei, of Furioso Farms in Temecula, Calif., sees a variety of reasons for the show’s popularity. He has kept an eye on the show for years, and been a regular attendee for more than a decade. “They have great spectator appeal,” he says. “The farms, the exhibitors, all have parties. They all get along. What it shows me is that in order for a show to survive, or a particular segment of our industry to thrive, they have to be fun. it has to be fun for the exhibitor. it has to be fun for the breeder. And that takes the pressure off the trainers. There’s less stress.” The lack of pressure does not lessen the edge of competition, he adds. “As far as i’m concerned—and this is the consensus of most of my friends who are leading trainers—the three big shows are scottsdale, the World Cup and the egyptian event.” The Basics Of The Event This year, the egyptian event took place June 3-8. The schedule, described by everyone as relaxed, is nevertheless packed for anyone who tries to do it all. The show offers standard competition for stallions, mares, colts, fillies and geldings, as well as “World Class” classes (for egyptian-sired

individuals, out of mares whoe are not straight egyptian); Futurities for yearlings and 2-year-olds, which this year paid out more than $85,000; “extended specialty” classes (for futurity horses at ages 3 and 4); the egyptian breeders Challenge (amateur futurities featuring horses born from breedings purchased at the ebC auction three years previous, which this year paid winners nearly $17,000 each); and performance (western pleasure, hunter, native costume and liberty). Augmenting the excitement in the show ring is the Kalkata which accompanied the futurities, in which not only the owners of the titlists earned prize money, but Kalkata high-bidders won cash for choosing the top contenders as well. in addition to the competition, the event offered a full battery of youth activities, two daily clinics by Tommy Garland, educational seminars, and social and fundraising events. As usual, it featured two auctions. on Thursday night, the egyptian breeders Challenge stallion season auction netted proceeds that indicate a pay-out in 2016 of more than $100,000, and on Friday evening, live and silent bids purchased art items to benefit the society’s programs.

There were also barn parties, guided barn tours, and several Pyramid Society meetings. Friday night’s “Mares: Queens of the Nile” Gala and Fundraiser was the highlight of the social scene, offering not only the art auction, but awards and recognitions as well. The 2013 Trustees Award winner was Polly Knoll, who has photographed some of the greatest Arabians in the breed and recorded the Event throughout its history. Knoll’s photographs, which were on display at the show throughout the week, are now on rotational exhibition at the Horse Park’s International Museum of the Horse. This year’s Event also featured innovations in its judging. The Pyramid Society developed its “Standards of Excellence,” which were forwarded to the five-judge panel ahead of the show. “That was to give them a good sense of [the Egyptian Arabian’s desirable qualities],” says Bishop. It also was to familiarize officials with a new criteria they would be evaluating entitled “Balance, Quality, and Substance at the Walk.” Then, in the show ring, the Society introduced a procedure which drew widespread approval: while three judges were on

duty in a class and one sat out, the fifth judge was assigned solely to watch the contenders for any practices in violation of the rules, particularly relating to abuse. During Saturday night’s junior and senior championships, all the judges had clipboards in their hands, further validating the titles that were awarded. “I thought the judging was excellent this year,” says longtime breeder Hank DeShazer, of DeShazer Arabians in Tomball, Tex. DeShazer has been coming to the Egyptian Event for more than two decades, and has won many trophies over the years (this year, DeShazer Arabians took seven horses to the show and saw six of them in Saturday’s night’s finals, including the Bronze Champion Senior Stallion, Aziim Al Amaar). Nevertheless, he cites the distribution of ribbons as one of the show’s strengths. “The championships were won by a lot of different farms.” “I thought the horses were better than ever, and I thought the judges did a super job,” nods Shawn Crews. “When you look at the champions in the end, everybody could say, ‘I can see why that’s it.’”

Was there a downside to this year’s event? “our numbers were down a little,” reports Anna bishop. “but that is a result of when the recession was at its peak, people were not nominating horses into the futurities. Despite the fact we&#39;d love to return to a 300-plus horse show, in this economic climate, we also have to be realistic.&quot; What The Egyptian Event Means In The Arabian World Today internationally, the egyptian event always has exerted an allure. “For many of our middle eastern clients, the event is as important a stop on the calendar as they have,” observes Greg Gallún, who annually brings his string from santa Ynez, Calif. “it is one of the big four titles in the world.” The significance of the event today lies not only in its promotion of the straight egyptian horse, but in the way that the straight egyptian is being used more and more in other programs. Anyone on hand in Lexington this year will cite the show’s egyptian-related program as a big part of its attraction.

“i’m seeing a lot more people at the event that are breeding generally mainstream horses, great ones, and they’re infusing egyptian blood,” observes shawn Crews. “They’re just coming to the show and enjoying it, and they want to do more. They either came to check it out, or they had a horse in the show—a lot them had egyptian related horses at the show, and a couple of them bought straight egyptian horses there. They come to play on the related level, and the next thing you know they’re falling head over heels and they’re buying straight horses. Those will be mixed with theirs.” one reason to breed straight egyptian horses, she adds, is to sustain their genetic pool for other breeders to use. And the event is the starting point for many breeders. “i think first it’s the show that brings them in, and then they fall in love with the horses.” “i think we’ve all realized in the Arabian horse industry that you’ve got to mix and match with all different types of Arabian horses to come up with what one might consider the

ultimate,” says Michael Wilson. “My personal involvement with Egyptian horses has never been about breeding straight Egyptians, although I have a great respect for that. I would dare to say that 80 percent or maybe more of everything I’m involved with has a significant straight Egyptian sire line. So, although I’m not a straight Egyptian breeder and I don’t work at a straight Egyptian farm, the straight Egyptian horse is critically important to what I do. In my opinion, it’s critically important to the breed.” You can gauge the success of a horse show by the trainers that show there, Raymond Mazzei offers. “The event brings in international trainers,” he points out. “There are always two or three from Europe.” That, he adds, is in addition to the mainstream American trainers who now are appearing there in force. Mazzei, who has been known for most of his career for his expertise with Polish horses, recognizes the role that Egyptians now play in his program, as he blends them into his own bloodlines to enhance the ‘beauty’ factor. “That’s helping me with my sales throughout the world,” he says. “The world is so small now that we look to international marketing as much as we look to our own national marketing. I don’t like to chase fads, but this is an evolution.”

“They want people to be really happy,” says Raymond Mazzei. “I mean, they make a big effort. When you go in their office, they are so extremely conscious of how they are with people.” That is the show itself. Michael Wilson addresses the Event’s overall significance. “We have to protect the straight Egyptian heritage,” he says. “If straight Egyptian breeders ever quit, the blood would get so diluted, I won’t be able to get at what I need sometimes. So, I think all of us trainers realize that, hey, these are the horses that make the world go around, and it’s a big world out there now. To turn your back on those people and those horses, in the long run, is short sighted. “And it’s a great horse show too,” he adds with a smile. “It’s a lot of fun, an international event where they’re buying horses. It’s the place to be in June every year.” ■

That is one reason that Egyptian Arabian associates report noteworthy sales at the Event. “I absolutely believe that we have something more to market than just a show horse,” says Hank DeShazer. “There’s a lot more interest in breeding horses in the Egyptian part of the industry. Therefore, we can sell breeding horses as well as show horses, and that’s, I think, a strength that we have in the purebred industry.” In the end, everyone says, the success and importance of the Egyptian Event lies in its magnetic character and what it means to the industry. “The centerpiece of Event planning has been to keep the relaxed pace and not have it like any other horse show,” reflects Anna Bishop. “You can run a typical 250-horse horse show in two or three days, realistically, if you run it like a horse show, but it has never been the intent of our organization to do it like that. The slower pace, the camaraderie—that’s the basis of nearly every decision made here.”