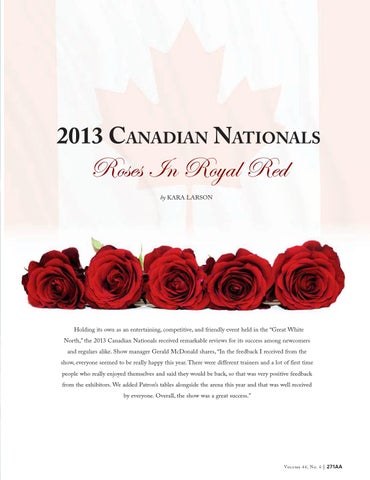 Holding its own as an entertaining, competitive, and friendly event held in the “Great White North,” the 2013 Canadian Nationals received remarkable reviews for its success among newcomers and regulars alike. Show manager Gerald McDonald shares, “In the feedback I received from the show, everyone seemed to be really happy this year. There were different trainers and a lot of first time people who really enjoyed themselves and said they would be back, so that was very positive feedback from the exhibitors. We added Patron’s tables alongside the arena this year and that was well received by everyone. Overall, the show was a great success.”

Part of the success and positivity surrounding the show comes with the environment in which it is held. Chris Culbreth of Culbreth Equine shares his thoughts on Brandon and the Keystone Center where the show is held. “Brandon is a smaller city than Regina was. However, what they lack in size is more than made up for with energy and ardor. Every restaurant in town knows about the show and is eager to welcome visitors to their city.” Culbreth continues, “The facilities at Keystone Center are very nice. The main arena is not very large; however, I showed in some of the largest classes of the show and felt that I had plenty of room to properly exhibit my horses. I was also very impressed with the number of advertising sponsors around the arena. The signage, along with other decorations, made the venue feel worthy of the quality event, and the Patrons lounge had great food and a welcoming atmosphere.” This satisfaction in the show can be emphasized through Canadian resident and longtime Arabian breeder and exhibitor Murray Popplewell. “Canadian Nationals is a great show EH! I am a little biased, but it is truly Canadian in the fact that it includes everyone from juniors and amateurs to the professionals. In the classes as well, as

it ranges from the Arabian park class to sport horse classes, and everyone mixes together. That is what our country is all about—including everyone.” Murray continues, “The city is friendly and the completion is great. Even with the show growing in numbers in the last few years still allows time to visit and mingle. Everyone seems to get along and have a great time.” Building on the feeling that everyone seems to get along at the show, McDonald shares the aspects of Canada that lend itself toward the atmosphere of a family oriented show. “It’s a relaxed atmosphere with a broad range of classes that allows everybody within the family to participate if they wish. Starting in Walk-Trot, and all the way up to the amateur and open classes. One of the new classes we added this year was the adult showmanship from a request that we got back in January, and was very well received. We had 18 horses in the class, and it was a prime example of sharing horses between the junior showman and the adult.” Whether exhibitors were sharing horses or keeping them to themselves, the legitimacy of any horse show lies in the level of competition and quality of horses and exhibitors.

2013 Canadian Nationals And for Murray, a great example of the depth presented itself in the halter classes. “The halter competition was good and strong. We had to be at our best and struggle for every point. When it was all over, we were happy with our wins and the judges’ opinions. We were just happy to be there!” Murray continues, “It’s always good to go to a national championship show and win, and when you don’t, it is good to be beat by better horses.” As Murray touches on, a national championship is a special award that, for most, will remain a dream, never breaking into the sphere of reality. It is exclusive and extraordinary, and for that reason, Canadian Nationals presents a unique opportunity to be in the running for that pinnacle of all awards. McDonald offers his take on what this award means for the show in the midst of the quality and depth of competition. “I look at it from the point of view that we are one of the four national events that AHA puts on and I think Canadian Nationals is a very important show for our country. I also think a national championship here is a great award to strive for. It’s an award that certainly takes some

2013 Canadian Nationals effort and some work, especially when you have numerous classes that are very competitive and deep like we did this year.â&amp;#x20AC;? Jeff Schall of Shada, Inc. also weighs in on pointing out the amazing opportunities Canadian Nationals facilitates. â&amp;#x20AC;&amp;#x153;Shada and their clients continue to be tremendous supporters and believers in the Canadian National show. It remains one of our most anticipated events of the season. The show seems to strike such a special balance between competitiveness and camaraderie. Additionally, the outstanding horsemen and horsewomen that compete and judge each year aid in creating a unique respect that is attached to a Canadian National title. A title, that for those who have achieved it, holds a special place in their hearts!â&amp;#x20AC;? With a 32-hour drive from Scottsdale, Arizona, Chris Culbreth has one of the largest commutes to the show of all the participants,