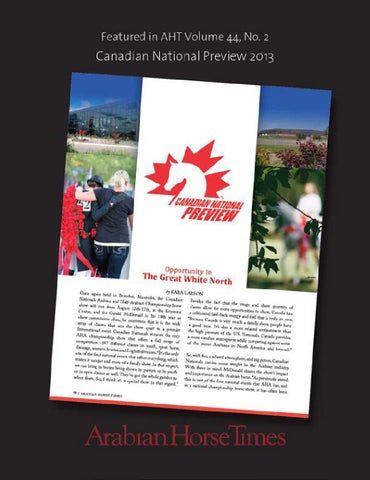 Once again held in Brandon, Manitoba, the Canadian Nationals Arabian and Half-Arabian Championship horse show will run from August 12th-17th, at the Keystone Centre, and for Gerald McDonald in his 18th year as show commission chair, he maintains that it is the wide array of classes that sets the show apart as a premier International event. Canadian Nationals remains the only AHA championship show that offers a full range of competition—187 different classes in youth, sport horse, dressage, western, hunter, and English divisions. “It’s the only one of the four national events that offers everything, which makes it unique and more of a family show. In that respect, we can bring in horses being shown by parents or by youth or in open classes as well. They’ve got the whole gambit to select from. So, I think it’s a special show in that regard.” 18 | A R A BI A N HOR SE T I MES

Besides the fact that the range and sheer quantity of classes allow for more opportunities to show, Canada has a celebrated laid-back energy and feel that is truly its own. “Because Canada is very much a family show, people have a good time. It’s also a more relaxed environment than the high pressure of the U.S. Nationals. Canada provides a more carefree atmosphere while competing against some of the nicest Arabians in North America and beyond.” So, with fun, a relaxed atmosphere, and big prizes, Canadian Nationals carries some weight in the Arabian industry. With these in mind, McDonald shares the show’s impact and importance on the Arabian horse. “As previously stated, this is one of the four national events that AHA has, and as a national championship horse show, it has often been

referred to as one of the three shows in the halter world for the triple crown, which is considered Scottsdale, Canadian Nationals, and U.S. Nationals.” McDonald continues, “I was talking to somebody a little while ago and they were telling me about the interest that the show has internationally with breeders around the world who are able to watch the show on the live feed. There are so many who are always interested in seeing what’s happening and how the show is doing, so that’s encouraging. It’s great to hear that we’re getting international exposure through the live feed and through the horses that we draw to the show.” In the changes made to the show from last year, the commission has added into the sport horse division the junior horse under saddle, and adult showmanship as well.

These changes, along with the proven schedule of past years, makes Canadian Nationals a worthwhile trip to the “Great White North” for a premier Arabian horse show. And in closing, Gerald encourages all to consider Canadian Nationals in a fresh and expectant light. With a wide array of classes in a family environment, not to mention the national championship titles up for grabs—Brandon, Manitoba and Gerald McDonald hope you’ll consider Canadian Nationals a viable option in your 2013 show season. “We try to offer something for everybody and do our best to make sure people have a good time, as we recognize the distance that people are traveling and the commitment that people make to our show. We’re always willing to work with the exhibitors the best that we can so that people want to come back and enjoy our great and influential Arabian horse show. ■ Volume 44, No. 2 | 19