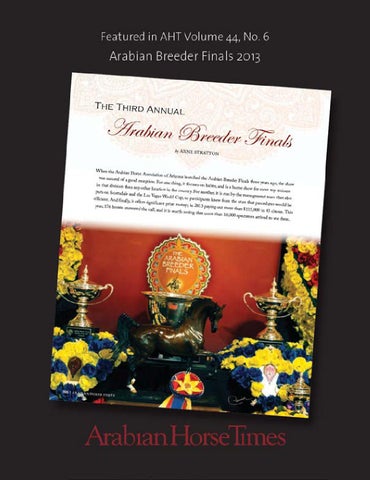 When the Arabian Horse Association of Arizona launched the Arabian Breeder Finals three years ago, the show was assured of a good reception. For one thing, it focuses on halter, and is a home show for more top trainers

in that division than any other location in the country. For another, it is run by the management team that also

puts on Scottsdale and the Las Vegas World Cup, so participants knew from the start that procedures would be

efficient. And finally, it offers significant prize money; in 2013 paying out more than $115,000 in 43 classes. This year, 176 horses answered the call, and it is worth noting that more than 10,000 spectators arrived to see them.

Held Held October October 9-12, 9-12,the the show show also also isis known known for for its its sense sense of of community. community.Bob Bob and and Dixie Dixie North, North,who who have have been been strong strong supporters supporters of of the the Finals Finals since since its its inception, inception,go go to to plenty plenty of of high high powered powered shows shows aa year, year,and and value value the the Finals Finals as as much much for for its its vibrant vibrant ambience ambience as as for for its its fine fine horses. horses.“I “I would would call call itit one one of of the the most most sociable sociable shows shows that that we we go go to.” to.” “We’ve “We’ve tried tried to to make make kind kind of of aa party party atmosphere,” atmosphere,”nods nods Janice Janice McCrea-Wight, McCrea-Wight,President President of of the the Arabian Arabian Horse Horse Association Association of of Arizona Arizona and and aa member member of of the the Show Show Commission. Commission.She She mentions mentions some some of of the the show’s show’s amenities. amenities.A A red red carpet carpet and and select select vendor vendor area area was was set set up up in in the the Equidome, Equidome,which which has has been been enclosed, enclosed,making making itit impervious impervious to to storms storms or or heat. heat.And And around around the the concourse, concourse,full full service service cabanas cabanas were were booked booked by by breeders, breeders, owners, owners,training training centers centers and and enthusiasts enthusiasts who who welcomed welcomed friends friends to to watch watch the the action, action,see see videos, videos,talk talk business business or or pleasure, pleasure,and and enjoy enjoy the the hospitality hospitality offered. offered.Every Every day, day,during during aa break break between between classes, classes,scheduled scheduled at at happy happy hour, hour,hors hors d’ d’ooeuvres euvres were were passed. passed. Even Even the the start start time time promotes promotes interaction. interaction.“The “The show show doesn’t doesn’t begin begin until until 22 in in the the afternoon, afternoon,because because we we want want people people to to be be able able to to visit visit the the farms.” farms.” “People “People seemed seemed to to very very positive positive and and supportive supportive of of one one another,” another,”Show Show Manager Manager Taryl Taryl Pearson Pearson observes. observes.“There “There was was aa lot lot of of socialization socialization among among the the cabanas cabanas and and on on the the red red carpet. carpet.The The feel feel was was very very festive.” festive.” This This year, year,the the level level of of competition competition could could be be seen seen clearly clearly in in the the stallion stallion and and mare mare titlists, titlists,who who already already boasted boasted national national credits. credits. Sandro Sandro Pinha Pinha led led Bob Bob and and Dixie Dixie North’s North’s El El Chall ChallWR, WR,aa 5-year-old 5-year-old with with two two U.S. U.S.national national reserve reserve championships championships on on his his record, record,to to the the title title in in Stallions, Stallions,over overWendell Wendell Hansen’s Hansen’s WH WH Patriot, Patriot,aa U.S. U.S.national national reserve reserve champion champion and and top top ten, ten, showing showing with withTravis Travis Hansen. Hansen.And And Champion Champion Mare Mare Azalea Azalea LBA, LBA,owned owned by by Lazy Lazy BB Arabians, Arabians,was was aa multi-national multi-national top top ten ten during during her her earlier earlier career; career;Dan Dan Bergren Bergren presented presented her her to to the the win, win,with with Shellbird’s Shellbird’s U.S. U.S.national national top top ten tenVerastrella, Verastrella, shown shown by by Steve Steve Heathcott, Heathcott,taking taking reserve. reserve. Azalea Azalea LBA, LBA,says says her her trainer, trainer,Rory Rory O’Neill, O’Neill,represented represented more more than than just just herself. herself.She She was was part part of of aa group—three group—three generations generations of of aa family—that family—that came came to to the the show show in in tribute tribute to to their their late late owner, owner,Lazy Lazy BB Arabians’ Arabians’Beverly Beverly Halquist, Halquist,who who died died in in August. August.The The matriarch matriarch of of the the group group was was Azalea Azalea LBA’s LBA’s dam, dam,the the highly highly successful successful broodmare broodmare Amelia Amelia B, B,who who won won the the 10 10 &amp; &amp; Over Over Mare Mare class class and and went went on on to to finish finish Bronze Bronze Champion Champion in in the the Senior Senior Mare Mare Championship, Championship,showing showing with with O’Neill. O’Neill.Fourth Fourth was was another another Amelia Amelia BB daughter, daughter,Vanity Vanity Fair Fair LBA, LBA,already already the the winner winner in in the the 3-Year-Old 3-Year-Old Filly Filly class. class.In In addition, addition,Azalea Azalea LBA’s LBA’s son, son,Avalon Avalon LBA, LBA,won won the the Yearling Yearling Colt/Gelding Colt/Gelding class class for for his his age age division division and and the the Scottsdale Scottsdale Signature Signature Champion Champion Yearling Yearling Colt Colt class, class,and and was was reserve reserve in in the the Junior Junior Colt Colt Championship. Championship.Another Another Amelia Amelia BB son, son, Amelio Amelio LBA, LBA,owned owned and and shown shown by by J.D. J.D.Smith, Smith,picked picked up up two two reserves reserves at at the the show. show.

Both Azalea LBA and Amelia B had been broodmares, not shown or show-conditioned for some time, although O’Neill remarks that they were in very good shape—just not as tightly fit as horses who campaign through the year. That introduces another element of the Breeder Finals: “This is a breeders’ show,” he says. “The judges who are trainers also manage breeding programs, so we thought the environment was right. These were quality mares who looked nice and they show well; from five mare classes, three of the ones on the front row were from that family.” When the word got around that the 13-year-old Amelia B would be in the ring late Thursday evening, many horsemen with other plans remained at the show grounds or came back to see her. Even her breeders, Roger and Stephanie McMahon from Washington, were in the audience. Pegasus Arabians honored with the Hennessey Arabians High Point Breeder Award.

As O’Neill pointed out, an important aspect of the Breeder Finals is its innovative judging panel. The show commission focused on experience, but with a broad range of perspective. “We’ve had some international judges, some breeders, and a couple trainers that aren’t officially judges,” says McCrea-Wight, “and some people from the past, like Don DeLongprè, who did a great job.” This year, the judges were: trainers Ted Carson, Mike Neal and Mike Wilson; international judge and trainer/handler Glenn Schouckens, from Belgium; breeder Linda Mehney; and in his long career, DeLongprè, who has been a breeder, trainer of both halter and performance horses, and owner. McCrea-Wight admits that since some do not judge on a regular basis, it sometimes slows the process a bit, but the confidence of the exhibitors is worth it. “I think the show is very non-political,” Bob North affirms. “They go out of their way to pick judges that don’t normally judge the horses and the shows leading up to U.S. Nationals. So, you get a fresh set of eyes looking at horses and evaluating them.” With those factors going for the Breeder Finals, it is probably not surprising that it attracts a worldwide audience. Through the convenience of live streaming, the competition reaches a larger crowd than the considerable one it attracts in Arizona. Janice McCrea-Wight discovered that when her stallion, Rahere, won 10 &amp; Over Stallions, and she led Rahere’s daughter, Rah Silkk, to the championship in 2-Year-Old Fillies ATH. “I think I had over 200 comments from around the world about how good Rahere looked,” she says. “It’s just amazing, the response. In this day and age, you’re out in the world—no question.” Bob North agrees. “We had lots of comments on Facebook and e-mails,” he says, “so it is watched and observed by many people around the U.S. and around the world.” As it grows, the show also is developing its own signature traditions. One that is especially appreciated is the Don Morse Perpetual Trophy, in memory of the popular breeder who died in 2011. Presented to the Champion Stallion, it was inaugurated last year by Janey Morse in recognition of her husband’s enthusiasm for the Arabian breed. This year, it was won by El Chall WR, owned by Bob and Dixie North. For the Norths, the victory was particularly sweet. “Last year, Magnum Chall HVP won that award,” says Bob. “So it was kind of exciting for us to take El Chall and have him be the second horse to ever win the award. Also, we were happy for Lucky and Raegen Lurken, owners of Magnum Chall. They were there and they were able to go in the ring and present the trophy to one of Magnum Chall’s sons.” A benefit of all the attention is the marketing aspect of the show. “There were a lot of horses that have sold at this show for the last couple years,” McCrea-Wight says. 110 | A R A BI A N HOR SE T I MES

At this point, the Breeder Finals has found its following. North believes that part of the show’s success is related to the show commission’s attention to pleasing its supporters. “The people that are behind the show, particularly [Show Commission Chairman] Jay Allen, have been very good in listening to the critiques or the comments from people who attended the show,” he says, “and in many cases responding to those comments and changing the show accordingly.” For Taryl Pearson, the challenge is to expand on the show’s promise. “I think we would like to continue to build on the fun, social portion of the show, as the quality of the horses was definitely there this year,” she says. “The committee for the show is really focused on growing the Arabian Breeder Finals into the premier halter show.” n