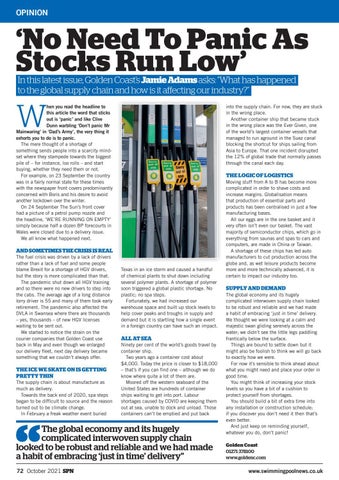 ‘No Need To Panic As Stocks Run Low’ In this latest issue, Golden Coast’s Jamie Adams asks: “What has happened to the global supply chain and how is it affecting our industry?”

hen you read the headline to this article the word that sticks out is ‘panic’ and like Clive Dunn warbling ‘Don’t panic Mr Mainwaring’ in ‘Dad’s Army’, the very thing it exhorts you to do is to panic. The mere thought of a shortage of something sends people into a scarcity mindset where they stampede towards the biggest pile of – for instance, loo rolls – and start buying, whether they need them or not. For example, on 23 September the country was in a fairly normal state for these times with the newspaper front covers predominantly concerned with Boris and his desire to avoid another lockdown over the winter. On 24 September The Sun’s front cover had a picture of a petrol pump nozzle and the headline, ‘WE’RE RUNNING ON EMPTY’ simply because half a dozen BP forecourts in Wales were closed due to a delivery issue. We all know what happened next.

into the supply chain. For now, they are stuck in the wrong place. Another container ship that became stuck in the wrong place was the Ever Given, one of the world’s largest container vessels that managed to run aground in the Suez canal blocking the shortcut for ships sailing from Asia to Europe. That one incident disrupted the 12% of global trade that normally passes through the canal each day.

THE LOGIC OF LOGISTICS

AND SOMETIMES THE CRISIS IS REAL The fuel crisis was driven by a lack of drivers rather than a lack of fuel and some people blame Brexit for a shortage of HGV drivers, but the story is more complicated than that. The pandemic shut down all HGV training and so there were no new drivers to step into the cabs. The average age of a long distance lorry driver is 55 and many of them took early retirement. The pandemic also affected the DVLA in Swansea where there are thousands – yes, thousands – of new HGV licenses waiting to be sent out. We started to notice the strain on the courier companies that Golden Coast use back in May and even though we enlarged our delivery fleet, next day delivery became something that we couldn’t always offer.

THE ICE WE SKATE ON IS GETTING PRETTY THIN The supply chain is about manufacture as much as delivery. Towards the back end of 2020, spa steps began to be difficult to source and the reason turned out to be climate change. In February a freak weather event buried

Texas in an ice storm and caused a handful of chemical plants to shut down including several polymer plants. A shortage of polymer soon triggered a global plastic shortage. No plastic; no spa steps. Fortunately, we had increased our warehouse space and built up stock levels to help cover peaks and troughs in supply and demand but it is startling how a single event in a foreign country can have such an impact.

ALL AT SEA Ninety per cent of the world’s goods travel by container ship. Two years ago a container cost about $4,000. Today the price is closer to $18,000 – that’s if you can find one – although we do know where quite a lot of them are. Moored off the western seaboard of the United States are hundreds of container ships waiting to get into port. Labour shortages caused by COVID are keeping them out at sea, unable to dock and unload. Those containers can’t be emptied and put back

The global economy and its hugely complicated interwoven supply chain looked to be robust and reliable and we had made a habit of embracing ‘just in time’ delivery” 72 October 2021 SPN 76_SPN_October_2021_Opinion.indd 72

Moving stuff from A to B has become more complicated in order to shave costs and increase margins. Globalisation means that production of essential parts and products has been centralised in just a few manufacturing bases. All our eggs are in the one basket and it very often isn’t even our basket. The vast majority of semiconductor chips, which go in everything from saunas and spas to cars and computers, are made in China or Taiwan. A shortage of these chips has led auto manufacturers to cut production across the globe and, as wet leisure products become more and more technically advanced, it is certain to impact our industry too.

SUPPLY AND DEMAND The global economy and its hugely complicated interwoven supply chain looked to be robust and reliable and we had made a habit of embracing ‘just in time’ delivery. We thought we were looking at a calm and majestic swan gliding serenely across the water; we didn’t see the little legs paddling frantically below the surface. Things are bound to settle down but it might also be foolish to think we will go back to exactly how we were. For now it’s sensible to think ahead about what you might need and place your order in good time. You might think of increasing your stock levels so you have a bit of a cushion to protect yourself from shortages. You should build a bit of extra time into any installation or construction schedule; if you discover you don’t need it then that’s even better. And just keep on reminding yourself, whatever you do, don’t panic! Golden Coast 01271 378100 www.goldenc.com