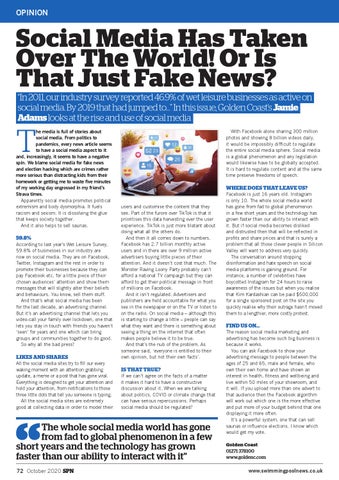 Social Media Has Taken Over The World! Or Is That Just Fake News?

“In 2011, our industry survey reported 46.9% of wet leisure businesses as active on social media. By 2019 that had jumped to…” In this issue, Golden Coast’s Jamie Adams looks at the rise and use of social media

he media is full of stories about social media. From politics to pandemics, every news article seems to have a social media aspect to it and, increasingly, it seems to have a negative spin. We blame social media for fake news and election hacking which are crimes rather more serious than distracting kids from their homework or getting me to waste five minutes of my working day engrossed in my friend’s Strava times. Apparently social media promotes political extremism and body dysmorphia. It fuels racism and sexism. It is dissolving the glue that keeps society together. And it also helps to sell saunas.

With Facebook alone sharing 300 million photos and showing 8 billion videos daily, it would be impossibly difficult to regulate the entire social media sphere. Social media is a global phenomenon and any legislation would likewise have to be globally accepted. It is hard to regulate content and at the same time preserve freedoms of speech.

WHERE DOES THAT LEAVE US?

users and customise the content that they see. Part of the furore over TikTok is that it prioritises this data harvesting over the user experience. TikTok is just more blatant about doing what all the others do. And then it all comes down to numbers. Facebook has 2.7 billion monthly active users and in there are over 9 million active advertisers buying little pieces of their attention. And it doesn’t cost that much. The Monster Raving Loony Party probably can’t afford a national TV campaign but they can afford to get their political message in front of millions on Facebook. And it isn’t regulated. Advertisers and publishers are held accountable for what you see in the newspaper or on the TV or listen to on the radio. On social media – although this is starting to change a little – people can say what they want and there is something about seeing a thing on the internet that often makes people believe it to be true. And that’s the nub of the problem. As someone said, ‘everyone is entitled to their own opinion, but not their own facts’.

If we can’t agree on the facts of a matter it makes it hard to have a constructive discussion about it. When we are talking about politics, COVID or climate change that can have serious repercussions. Perhaps social media should be regulated?

59.8% According to last year’s Wet Leisure Survey, 59.8% of businesses in our industry are now on social media. They are on Facebook, Twitter, Instagram and the rest in order to promote their businesses because they can pay Facebook etc, for a little piece of their chosen audiences’ attention and show them messages that will slightly alter their beliefs and behaviours. You know, sell them stuff. And that’s what social media has been for the last decade, an advertising channel. But it’s an advertising channel that lets you video-call your family over lockdown, one that lets you stay in touch with friends you haven’t ‘seen’ for years and one which can bring groups and communities together to do good. So why all the bad press?

The whole social media world has gone from fad to global phenomenon in a few short years and the technology has grown faster than our ability to interact with it” 72 October 2020 SPN 72_SPN_October_2020_Opinion.indd 72

Facebook is just 16 years old. Instagram is only 10. The whole social media world has gone from fad to global phenomenon in a few short years and the technology has grown faster than our ability to interact with it. But if social media becomes disliked and distrusted then that will be reflected in profits and share prices and that is surely a problem that all those clever people in Silicon Valley will want to address very quickly. The conversation around stopping disinformation and hate speech on social media platforms is gaining ground. For instance, a number of celebrities have boycotted Instagram for 24 hours to raise awareness of the issues but when you realise that Kim Kardashian can be paid $500,000 for a single sponsored post on the site you quickly realise why their outrage hasn’t moved them to a lengthier, more costly protest.

FIND US ON… The reason social media marketing and advertising has become such big business is because it works. You can ask Facebook to show your advertising message to people between the ages of 25 and 65, male and female, who own their own home and have shown an interest in health, fitness and wellbeing and live within 50 miles of your showroom, and it will. If you upload more than one advert to that audience then the Facebook algorithm will work out which one is the more effective and put more of your budget behind that one displaying it more often. It’s a powerful system, one that can sell saunas or influence elections. I know which would get my vote. Golden Coast 01271 378100 www.goldenc.com