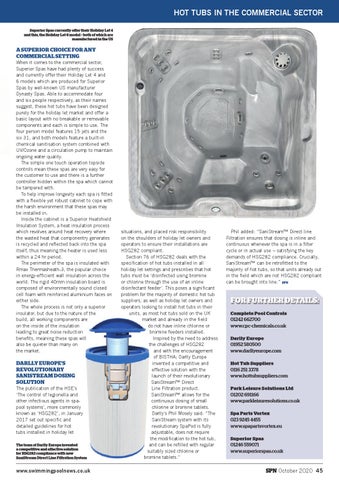 HOT TUBS IN THE COMMERCIAL SECTOR Superior Spas currently offer their Holiday Let 4 and this, the Holiday Let 6 model – both of which are manufactured in the US

A SUPERIOR CHOICE FOR ANY COMMERCIAL SETTING When it comes to the commercial sector, Superior Spas have had plenty of success and currently offer their Holiday Let 4 and 6 models which are produced for Superior Spas by well-known US manufacturer Dynasty Spas. Able to accommodate four and six people respectively, as their names suggest, these hot tubs have been designed purely for the holiday let market and offer a basic layout with no breakable or removable components and each is simple to use. The four person model features 15 jets and the six 31, and both models feature a built-in chemical sanitisation system combined with UV/Ozone and a circulation pump to maintain ongoing water quality. The simple one touch operation topside controls mean these spas are very easy for the customer to use and there is a further controller hidden within the spa which cannot be tampered with. To help improve longevity each spa is fitted with a flexible yet robust cabinet to cope with the harsh environment that these spas may be installed in. Inside the cabinet is a Superior Heatshield Insulation System, a heat insulation process which revolves around heat recovery where the wasted heat that componentry generates is recycled and reflected back into the spa itself, thus meaning the heater is used less within a 24 hr period. The perimeter of the spa is insulated with Rmax Thermasheath-3, the popular choice in energy-efficient wall insulation across the world. The rigid 40mm insulation board is composed of environmentally sound closed cell foam with reinforced aluminium faces on either side. The whole process is not only a superior insulator, but due to the nature of the build, all working components are on the inside of the insulation leading to great noise reduction benefits, meaning these spas will also be quieter than many on the market.

DARLLY EUROPE’S REVOLUTIONARY SANISTREAM DOSING SOLUTION The publication of the HSE’s ‘The control of legionella and other infectious agents in spapool systems’, more commonly known as ‘HSG282’, in January 2017 set out specific and detailed guidelines for hot tubs installed in holiday let The team at Darlly Europe invented a competitive and effective solution for HSG282 compliance with new SaniStream Direct Line Filtration System

situations, and placed risk responsibility on the shoulders of holiday let owners and operators to ensure their installations are HSG282 compliant. Section 76 of HSG282 deals with the specification of hot tubs installed in all holiday let settings and prescribes that hot tubs must be ‘disinfected using bromine or chlorine through the use of an inline disinfectant feeder’. This poses a significant problem for the majority of domestic hot tub suppliers, as well as holiday let owners and operators looking to install hot tubs in their units, as most hot tubs sold on the UK market and already in the field do not have inline chlorine or bromine feeders installed. Inspired by the need to address the challenges of HSG282 and with the encouragement of BISTHA; Darlly Europe invented a competitive and effective solution with the launch of their revolutionary SaniStream™ Direct Line Filtration product. SaniStream™ allows for the continuous dosing of small chlorine or bromine tablets. Darlly’s Phil Mosely said: “The SaniStream system with its revolutionary SpaPod is fully adjustable, does not require the modification to the hot tub, and can be refilled with regular suitably sized chlorine or bromine tablets.”

Phil added: “SaniStream™ Direct line Filtration ensures that dosing is inline and continuous whenever the spa is in a filter cycle or in actual use − satisfying the key demands of HSG282 compliance. Crucially, SaniStream™ can be retrofitted to the majority of hot tubs, so that units already out in the field which are not HSG282 compliant can be brought into line.”