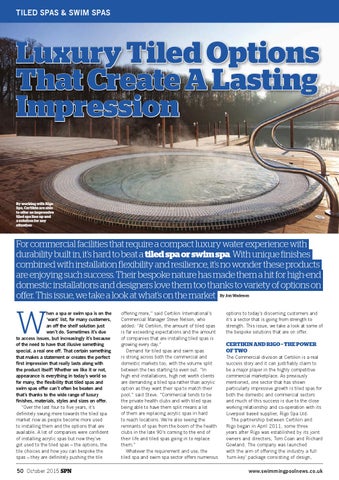 By working with Rigo Spa, Certikin are able to offer an impressive tiled spa line up and a solution for any situation

For commercial facilities that require a compact luxury water experience with durability built in, it’s hard to beat a tiled spa or swim spa. With unique finishes combined with installation flexibility and resilience, it’s no wonder these products are enjoying such success. Their bespoke nature has made them a hit for high-end domestic installations and designers love them too thanks to variety of options on offer. This issue, we take a look at what’s on the market By Jon Wadeson

hen a spa or swim spa is on the ‘want’ list, for many customers, an off the shelf solution just won’t do. Sometimes it’s due to access issues, but increasingly it’s because of the need to have that illusive something special, a real one off. That certain something that makes a statement or creates the perfect first impression that really lasts along with the product itself! Whether we like it or not, appearance is everything in today’s world so for many, the flexibility that tiled spas and swim spas offer can’t often be beaten and that’s thanks to the wide range of luxury finishes, materials, styles and sizes on offer. “Over the last four to five years, it’s definitely swung more towards the tiled spa market now as people become more used to installing them and the options that are available. A lot of companies were confident of installing acrylic spas but now they’ve got used to the tiled spas – the options, the tile choices and how you can bespoke the spas – they are definitely pushing the tile

offering more,” said Certikin International’s Commercial Manager Steve Nelson, who added: “At Certikin, the amount of tiled spas is far exceeding expectations and the amount of companies that are installing tiled spas is growing every day.” Demand for tiled spas and swim spas is strong across both the commercial and domestic markets too, with the volume split between the two starting to even out. “In high end installations, high net worth clients are demanding a tiled spa rather than acrylic option as they want their spa to match their pool,” said Steve. “Commercial tends to be the private health clubs and with tiled spas being able to have them split means a lot of them are replacing acrylic spas in hard to reach locations. We’re also seeing the remnants of spas from the boom of the health clubs in the late 90’s coming to the end of their life and tiled spas going in to replace them.” Whatever the requirement and use, the tiled spa and swim spa sector offers numerous

options to today’s discerning customers and it’s a sector that is going from strength to strength. This issue, we take a look at some of the bespoke solutions that are on offer.

CERTIKIN AND RIGO – THE POWER OF TWO The Commercial division at Certikin is a real success story and it can justifiably claim to be a major player in the highly competitive commercial marketplace. As previously mentioned, one sector that has shown particularly impressive growth is tiled spas for both the domestic and commercial sectors and much of this success is due to the close working relationship and co-operation with its Liverpool based supplier, Rigo Spa Ltd. The partnership between Certikin and Rigo began in April 2011, some three years after Rigo was established by its joint owners and directors, Tom Coan and Richard Gowland. The company was launched with the aim of offering the industry a full ‘turn-key’ package consisting of design,