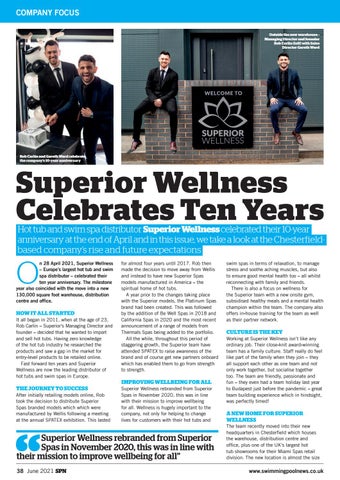 Hot tub and swim spa distributor Superior Wellness celebrated their 10-year anniversary at the end of April and in this issue, we take a look at the Chesterfieldbased company’s rise and future expectations

HOW IT ALL STARTED It all began in 2011, when at the age of 23, Rob Carlin – Superior’s Managing Director and founder – decided that he wanted to import and sell hot tubs. Having zero knowledge of the hot tub industry he researched the products and saw a gap in the market for entry-level products to be retailed online. Fast forward ten years and Superior Wellness are now the leading distributor of hot tubs and swim spas in Europe.

THE JOURNEY TO SUCCESS After initially retailing models online, Rob took the decision to distribute Superior Spas branded models which which were manufactured by Wellis following a meeting at the annual SPATEX exhibition. This lasted

for almost four years until 2017. Rob then made the decision to move away from Wellis and instead to have new Superior Spas models manufactured in America – the spiritual home of hot tubs. A year prior to the changes taking place with the Superior models, the Platinum Spas brand had been created. This was followed by the addition of Be Well Spas in 2018 and California Spas in 2020 and the most recent announcement of a range of models from Thermals Spas being added to the portfolio. All the while, throughout this period of staggering growth, the Superior team have attended SPATEX to raise awareness of the brand and of course get new partners onboard which has enabled them to go from strength to strength.

IMPROVING WELLBEING FOR ALL Superior Wellness rebranded from Superior Spas in November 2020, this was in line with their mission to improve wellbeing for all. Wellness is hugely important to the company, not only for helping to change lives for customers with their hot tubs and

Superior Wellness rebranded from Superior Spas in November 2020, this was in line with their mission to improve wellbeing for all” 38 June 2021 SPN 38-39_SPN_June_2021_Superior_Focus.indd 38

swim spas in terms of relaxation, to manage stress and soothe aching muscles, but also to ensure good mental health too – all whilst reconnecting with family and friends. There is also a focus on wellness for the Superior team with a new onsite gym, subsidised healthy meals and a mental health champion within the team. The company also offers in-house training for the team as well as their partner network.

CULTURE IS THE KEY Working at Superior Wellness isn’t like any ordinary job. Their close-knit award-winning team has a family culture. Staff really do feel like part of the family when they join – they all support each other as one team and not only work together, but socialise together too. The team are friendly, passionate and fun – they even had a team holiday last year to Budapest just before the pandemic – great team building experience which in hindsight, was perfectly timed!

A NEW HOME FOR SUPERIOR WELLNESS The team recently moved into their new headquarters in Chesterfield which houses the warehouse, distribution centre and office, plus one of the UK’s largest hot tub showrooms for their Miami Spas retail division. The new location is almost the size