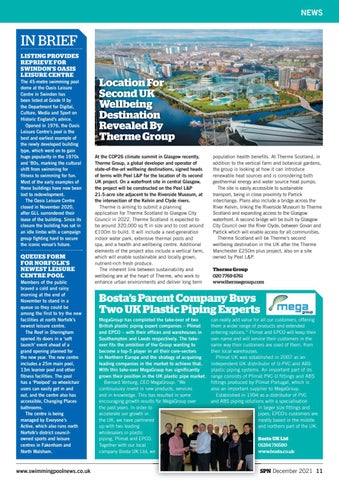 IN BRIEF LISTING PROVIDES REPRIEVE FOR SWINDON’S OASIS LEISURE CENTRE The 45-metre swimming pool dome at the Oasis Leisure Centre in Swindon has been listed at Grade II by the Department for Digital, Culture, Media and Sport on Historic England’s advice. Opened in 1976, the Oasis Leisure Centre’s pool is the best and earliest example of the newly developed building type, which went on to gain huge popularity in the 1970s and ’80s, marking the cultural shift from swimming for fitness to swimming for fun. Most of the early examples of these buildings have now been lost to redevelopment. The Oasis Leisure Centre closed in November 2020, after GLL surrendered their lease of the building. Since its closure the building has sat in an idle limbo with a campaign group fighting hard to secure the iconic venue’s future.

QUEUES FORM FOR NORFOLK’S NEWEST LEISURE CENTRE POOL Members of the public braved a cold and rainy morning at the end of November to stand in a queue so they could be among the first to try the new facilities at north Norfolk’s newest leisure centre. The Reef in Sheringham opened its doors in a ‘soft launch’ event ahead of a grand opening planned for the new year. The new centre includes a 25m main pool, 13m learner pool and other fitness facilities. The pool has a ‘Poolpod’ so wheelchair users can easily get in and out, and the centre also has accessible, Changing Places bathrooms. The centre is being managed by Everyone’s Active, which also runs north Norfolk’s district councilowned sports and leisure centres in Fakenham and North Walsham.

Location For Second UK Wellbeing Destination Revealed By Therme Group At the COP26 climate summit in Glasgow recently, Therme Group, a global developer and operator of state-of-the-art wellbeing destinations, signed heads of terms with Peel L&amp;P for the location of its second UK project. On a waterfront site in central Glasgow, the project will be constructed on the Peel L&amp;P 21.5-acre site adjacent to the Riverside Museum, at the intersection of the Kelvin and Clyde rivers. Therme is aiming to submit a planning application for Therme Scotland to Glasgow City Council in 2022. Therme Scotland is expected to be around 320,000 sq ft in size and to cost around £100m to build. It will include a next-generation indoor water park, extensive thermal pools and spa, and a health and wellbeing centre. Additional elements of the project also include a vertical farm, which will enable sustainable and locally grown, nutrient-rich fresh produce. The inherent link between sustainability and wellbeing are at the heart of Therme, who work to enhance urban environments and deliver long term

population health benefits. At Therme Scotland, in addition to the vertical farm and botanical gardens, the group is looking at how it can introduce renewable heat sources and is considering both geothermal energy and water source heat pumps. The site is easily accessible to sustainable transport, being in close proximity to Partick interchange. Plans also include a bridge across the River Kelvin, linking the Riverside Museum to Therme Scotland and expanding access to the Glasgow waterfront. A second bridge will be built by Glasgow City Council over the River Clyde, between Govan and Partick which will enable access for all communities. Therme Scotland will be Therme’s second wellbeing destination in the UK after the Therme Manchester £250m plus project, also on a site owned by Peel L&amp;P. Therme Group 020 7769 6761 www.thermegroup.com

Bosta’s Parent Company Buys Two UK Plastic Piping Experts MegaGroup has completed the take-over of two British plastic piping expert companies – Plimat and EPCO – with their offices and warehouses in Southampton and Leeds respectively. The takeover fits the ambition of the Group wanting to become a top-5 player in all their core-sectors in Northern Europe and the strategy of acquiring leading companies in the market to achieve that. With this take-over MegaGroup has significantly grown their position in the UK plastic pipe market. Bernard Verburg, CEO MegaGroup: “We continuously invest in new products, services and in knowledge. This has resulted in some encouraging growth results for MegaGroup over the past years. In order to accelerate our growth in the UK, we have partnered up with two leading wholesalers in plastic piping, Plimat and EPCO. Together with our local company Bosta UK Ltd, we

can really add value for all our customers, offering them a wider range of products and extended ordering options.” Plimat and EPCO will keep their own name and will service their customers in the same way their customers are used of them, from their local warehouses. Plimat UK was established in 2007 as an independent UK distributor of U-PVC and ABS plastic piping systems. An important part of its range consists of Plimat PVC-U fittings and ABS fittings produced by Plimat Portugal, which is also an important supplier to MegaGroup. Established in 1994 as a distributor of PVC and ABS piping solutions with a specialisation in larger size fittings and pipes, EPCO’s customers are mostly based in the middle and northern part of the UK. Bosta UK Ltd 01284 716580 www.bosta.co.uk