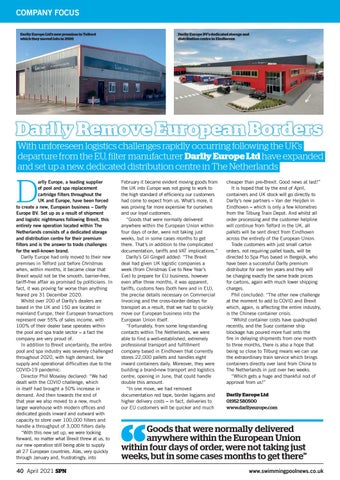 arlly Europe, a leading supplier of pool and spa replacement cartridge filters throughout the UK and Europe, have been forced to create a new, European business – Darlly Europe BV. Set up as a result of shipment and logistic nightmares following Brexit, this entirely new operation located within The Netherlands consists of a dedicated storage and distribution centre for their premium filters and is the answer to trade challenges for the well-known brand. Darlly Europe had only moved to their new premises in Telford just before Christmas when, within months, it became clear that Brexit would not be the smooth, barrier-free, tariff-free affair as promised by politicians. In fact, it was proving far worse than anything feared pre 31 December 2020. Whilst over 200 of Darlly’s dealers are based in the UK and 150 are located in mainland Europe, their European transactions represent over 55% of sales income, with 100% of their dealer base operates within the pool and spa trade sector – a fact the company are very proud of. In addition to Brexit uncertainty, the entire pool and spa industry was severely challenged throughout 2020, with high demand, low supply and operational difficulties due to the COVID-19 pandemic. Director Phil Moseley declared: “We had dealt with the COVID challenge, which in itself had brought a 50% increase in demand. And then towards the end of that year we also moved to a new, much larger warehouse with modern offices and dedicated goods inward and outward with capacity to store over 100,000 filters and handle a throughput of 3,000 filters daily. “With this new set up, we were looking forward, no matter what Brexit threw at us, to our new operation still being able to supply all 27 European countries. Alas, very quickly through January and, frustratingly, into

February it became evident moving goods from the UK into Europe was not going to work to the high standard of efficiency our customers had come to expect from us. What’s more, it was proving far more expensive for ourselves and our loyal customers. “Goods that were normally delivered anywhere within the European Union within four days of order, were not taking just weeks, but in some cases months to get there. That’s in addition to the complicated documentation, tariffs and VAT implications.” Darlly’s Gil Gingell added: “The Brexit deal had given UK logistic companies a week (from Christmas Eve to New Year’s Eve) to prepare for EU business, however even after three months, it was apparent, tariffs, customs fees (both here and in EU), the precise details necessary on Commercial Invoicing and the cross-border delays for transport as a result, that we had to quickly move our European business into the European Union itself. “Fortunately, from some long-standing contacts within The Netherlands, we were able to find a well-established, extremely professional transport and fulfillment company based in Eindhoven that currently stores 22,000 pallets and handles eight inward containers daily. Moreover, they were building a brand-new transport and logistics centre, opening in June, that could handle double this amount. “In one move, we had removed documentation red tape, border logjams and higher delivery costs – in fact, deliveries to our EU customers will be quicker and much

cheaper than pre-Brexit. Good news at last!” It is hoped that by the end of April, containers and UK stock will go directly to Darlly’s new partners – Van der Heijden in Eindhoven – which is only a few kilometres from the Tilburg Train Depot. And whilst all order processing and the customer helpline will continue from Telford in the UK, all pallets will be sent direct from Eindhoven across the entirety of the European Union. Trade customers with just small carton orders, not requiring pallet loads, will be directed to Spa Plus based in Bergeijk, who have been a successful Darlly premium distributor for over ten years and they will be charging exactly the same trade prices for cartons, again with much lower shipping charges. Phil concluded: “The other new challenge at the moment to add to COVID and Brexit which, again, is affecting the entire industry, is the Chinese container crisis. “Whilst container costs have quadrupled recently, and the Suez container ship blockage has poured more fuel onto the fire in delaying shipments from one month to three months, there is also a hope that being so close to Tilburg means we can use the extraordinary train service which brings containers directly over land from China to The Netherlands in just over two weeks. “Which gets a huge and thankful nod of approval from us!” Darlly Europe Ltd 01952 580500 www.darllyeurope.com

Goods that were normally delivered anywhere within the European Union within four days of order, were not taking just weeks, but in some cases months to get there” www.swimmingpoolnews.co.uk 28/04/2021 22:37