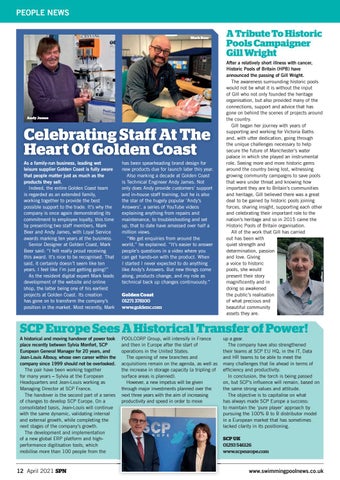 Celebrating Staff At The Heart Of Golden Coast As a family-run business, leading wet leisure supplier Golden Coast is fully aware that people matter just as much as the products they sell. Indeed, the entire Golden Coast team is regarded as an extended family, working together to provide the best possible support to the trade. It’s why the company is once again demonstrating its commitment to employee loyalty, this time by presenting two staff members, Mark Beer and Andy James, with Loyal Service awards marking ten years at the business. Senior Designer at Golden Coast, Mark Beer said: “I felt really proud receiving this award. It’s nice to be recognised. That said, it certainly doesn’t seem like ten years. I feel like I’m just getting going!” As the resident digital expert Mark leads development of the website and online shop, the latter being one of his earliest projects at Golden Coast. Its creation has gone on to transform the company’s position in the market. Most recently, Mark

has been spearheading brand design for new products due for launch later this year. Also marking a decade at Golden Coast is Technical Engineer Andy James. Not only does Andy provide customers’ support and in-house staff training, but he is also the star of the hugely popular ‘Andy’s Answers’, a series of YouTube videos explaining anything from repairs and maintenance, to troubleshooting and set up, that to date have amassed over half a million views. “We get enquiries from around the world,” he explained. “It’s easier to answer people’s questions in a video where you can get hands-on with the product. When I started I never expected to do anything like Andy’s Answers. But new things come along, products change, and my role as technical back up changes continuously.” Golden Coast 01271 378100 www.goldenc.com

A Tribute To Historic Pools Campaigner Gill Wright After a relatively short illness with cancer, Historic Pools of Britain (HPB) have announced the passing of Gill Wright. The awareness surrounding historic pools would not be what it is without the input of Gill who not only founded the heritage organisation, but also provided many of the connections, support and advice that has gone on behind the scenes of projects around the country. Gill began her journey with years of supporting and working for Victoria Baths and, with utter dedication, going through the unique challenges necessary to help secure the future of Manchester’s water palace in which she played an instrumental role. Seeing more and more historic gems around the country being lost, witnessing growing community campaigns to save pools that were under threat and knowing how important they are to Britain’s communities and heritage, Gill believed there was a great deal to be gained by historic pools joining forces, sharing insight, supporting each other and celebrating their important role to the nation’s heritage and so in 2015 came the Historic Pools of Britain organisation.  All of the work that Gill has carried out has been with quiet strength and determination, passion and love. Giving a voice to historic pools, she would present their story magnificently and in doing so awakened the public’s realisation of what precious and beautiful community assets they are.

A historical and moving handover of power took place recently between Sylvia Monfort, SCP European General Manager for 20 years, and Jean-Louis Albouy, whose own career within the company since 1999 should not be overlooked. The pair have been working together for many years – Sylvia at the European Headquarters and Jean-Louis working as Managing Director at SCP France. The handover is the second part of a series of changes to develop SCP Europe. On a consolidated basis, Jean-Louis will continue with the same dynamic, validating internal and external growth, while completing the next stages of the company’s growth. The development and implementation of a new global ERP platform and highperformance digitisation tools, which mobilise more than 100 people from the

POOLCORP Group, will intensify in France and then in Europe after the start of operations in the United States. The opening of new branches and acquisitions remain on the agenda, as well as the increase in storage capacity (a tripling of surface areas is planned). However, a new impetus will be given through major investments planned over the next three years with the aim of increasing productivity and speed in order to move

up a gear. The company have also strengthened their teams at SCP EU HQ, in the IT, Data and HR teams to be able to meet the many challenges that lie ahead in terms of efficiency and productivity. In conclusion, the torch is being passed on, but SCP’s influence will remain, based on the same strong values and attitude. The objective is to capitalise on what has always made SCP Europe a success: to maintain the ‘pure player’ approach by pursuing the 100% B to B distributor model in a European market that has sometimes lacked clarity in its positioning. SCP UK 01293 546126 www.scpeurope.com