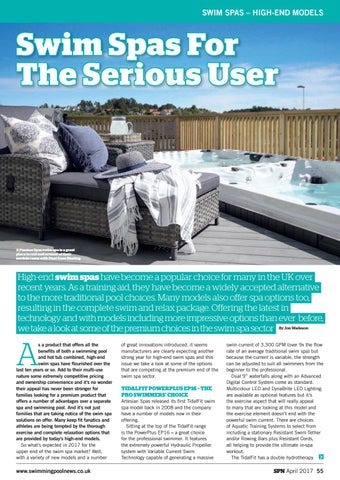 Swim Spas For The Serious User

High-end swim spas have become a popular choice for many in the UK over recent years. As a training aid, they have become a widely accepted alternative to the more traditional pool choices. Many models also offer spa options too, resulting in the complete swim and relax package. Offering the latest in technology and with models including more impressive options than ever before, we take a look at some of the premium choices in the swim spa sector By Jon Wadeson

s a product that offers all the benefits of both a swimming pool and hot tub combined, high-end swim spas have flourished over the last ten years or so. Add to their multi-use nature some extremely competitive pricing and ownership convenience and it’s no wonder their appeal has never been stronger for families looking for a premium product that offers a number of advantages over a separate spa and swimming pool. And it’s not just families that are taking notice of the swim spa solutions on offer. Many keep fit fanatics and athletes are being tempted by the thorough exercise and complete relaxation options that are provided by today’s high-end models. So what’s expected in 2017 for the upper end of the swim spa market? Well, with a variety of new models and a number

of great innovations introduced, it seems manufacturers are clearly expecting another strong year for high-end swim spas and this issue we take a look at some of the options that are competing at the premium end of the swim spa sector.

TIDALFIT POWERPLUS EP16 – THE PRO SWIMMERS’ CHOICE Artesian Spas released its first TidalFit swim spa model back in 2008 and the company have a number of models now in their offering. Sitting at the top of the TidalFit range is the PowerPlus EP16 – a great choice for the professional swimmer. It features the extremely powerful Hydraulic Propeller system with Variable Current Swim Technology capable of generating a massive

swim current of 3,300 GPM (over 9x the flow rate of an average traditional swim spa) but because the current is variable, the strength can be adjusted to suit all swimmers from the beginner to the professional. Dual 9” waterfalls along with an Advanced Digital Control System come as standard. Multicolour LED and DynaBrite LED Lighting are available as optional features but it’s the exercise aspect that will really appeal to many that are looking at this model and the exercise element doesn’t end with the powerful swim current. There are choices of Aquatic Training Systems to select from including a stationary Resistant Swim Tether and/or Rowing Bars plus Resistant Cords, all helping to provide the ultimate in-spa workout. The TidalFit has a double hydrotherapy