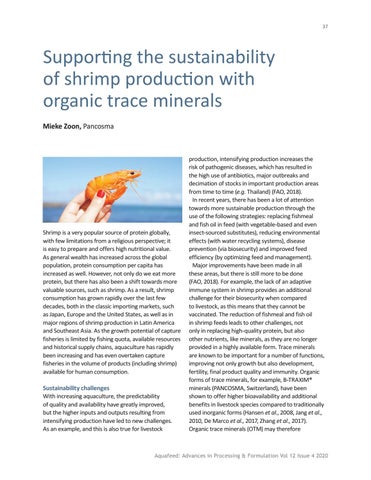 Shrimp is a very popular source of protein globally, with few limitations from a religious perspective; it is easy to prepare and offers high nutritional value. As general wealth has increased across the global population, protein consumption per capita has increased as well. However, not only do we eat more protein, but there has also been a shift towards more valuable sources, such as shrimp. As a result, shrimp consumption has grown rapidly over the last few decades, both in the classic importing markets, such as Japan, Europe and the United States, as well as in major regions of shrimp production in Latin America and Southeast Asia. As the growth potential of capture fisheries is limited by fishing quota, available resources and historical supply chains, aquaculture has rapidly been increasing and has even overtaken capture fisheries in the volume of products (including shrimp) available for human consumption.

Sustainability challenges With increasing aquaculture, the predictability of quality and availability have greatly improved, but the higher inputs and outputs resulting from intensifying production have led to new challenges. As an example, and this is also true for livestock

production, intensifying production increases the risk of pathogenic diseases, which has resulted in the high use of antibiotics, major outbreaks and decimation of stocks in important production areas from time to time (e.g. Thailand) (FAO, 2018). In recent years, there has been a lot of attention towards more sustainable production through the use of the following strategies: replacing fishmeal and fish oil in feed (with vegetable-based and even insect-sourced substitutes), reducing environmental effects (with water recycling systems), disease prevention (via biosecurity) and improved feed efficiency (by optimizing feed and management). Major improvements have been made in all these areas, but there is still more to be done (FAO, 2018). For example, the lack of an adaptive immune system in shrimp provides an additional challenge for their biosecurity when compared to livestock, as this means that they cannot be vaccinated. The reduction of fishmeal and fish oil in shrimp feeds leads to other challenges, not only in replacing high-quality protein, but also other nutrients, like minerals, as they are no longer provided in a highly available form. Trace minerals are known to be important for a number of functions, improving not only growth but also development, fertility, final product quality and immunity. Organic forms of trace minerals, for example, B-TRAXIMÂŽ minerals (PANCOSMA, Switzerland), have been shown to offer higher bioavailability and additional benefits in livestock species compared to traditionally used inorganic forms (Hansen et al., 2008, Jang et al., 2010, De Marco et al., 2017, Zhang et al., 2017). Organic trace minerals (OTM) may therefore