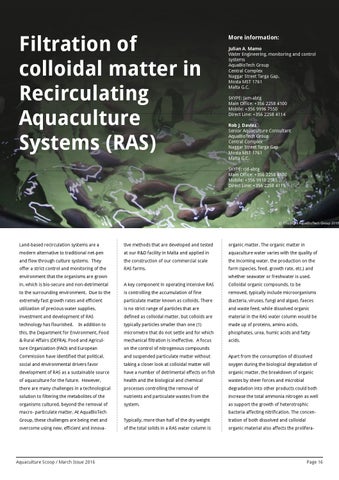 Land-based recirculation systems are a

tive methods that are developed and tested

at our R&D facility in Malta and applied in

aquaculture water varies with the quality of

and flow through culture systems. They

the construction of our commercial scale

the incoming water, the production on the

offer a strict control and monitoring of the

environment that the organisms are grown

whether seawater or freshwater is used.

in, which is bio-secure and non-detrimental

Colloidal organic compounds, to be

to the surrounding environment. Due to the

is controlling the accumulation of fine

particulate matter known as colloids. There

is no strict range of particles that are

and waste feed, while dissolved organic

investment and development of RAS

defined as colloidal matter, but colloids are

material in the RAS water column would be

typically particles smaller than one (1)

made up of proteins, amino acids,

this, the Department for Environment, Food

micrometre that do not settle and for which

mechanical filtration is ineffective. A focus

on the control of nitrogenous compounds

Commission have identified that political,

and suspended particulate matter without

Apart from the consumption of dissolved

taking a closer look at colloidal matter will

oxygen during the biological degradation of

development of RAS as a sustainable source

have a number of detrimental effects on fish

organic matter, the breakdown of organic

of aquaculture for the future. However,

health and the biological and chemical

wastes by sheer forces and microbial

there are many challenges in a technological

processes controlling the removal of

degradation into other products could both

solution to filtering the metabolites of the

nutrients and particulate wastes from the

organisms cultured, beyond the removal of

as support the growth of heterotrophic

Group, these challenges are being met and

Typically, more than half of the dry weight

tration of both dissolved and colloidal

of the total solids in a RAS water column is 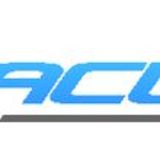 In this issue we take a look at Extrusion advances with insight from Andritz, Gordon Young and Dennis Forte. We learn about Processing Techn...

In this issue we take a look at Extrusion advances with insight from Andritz, Gordon Young and Dennis Forte. We learn about Processing Techn...