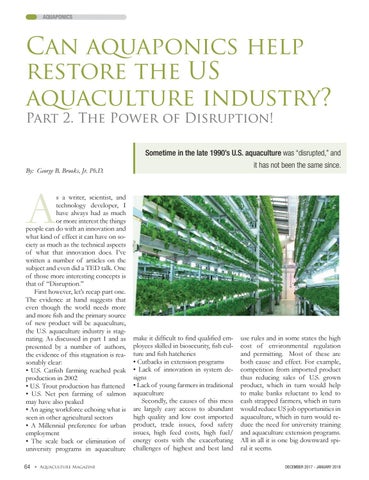 Can aquaponics help restore the US aquaculture industry? Part 2. The Power of Disruption!

Sometime in the late 1990’s U.S. aquaculture was “disrupted,” and it has not been the same since.

s a writer, scientist, and technology developer, I have always had as much or more interest the things people can do with an innovation and what kind of effect it can have on society as much as the technical aspects of what that innovation does. I’ve written a number of articles on the subject and even did a TED talk. One of those more interesting concepts is that of “Disruption.” First however, let’s recap part one. The evidence at hand suggests that even though the world needs more and more fish and the primary source of new product will be aquaculture, the U.S. aquaculture industry is stagnating. As discussed in part 1 and as presented by a number of authors, the evidence of this stagnation is reasonably clear: • U.S. Catfish farming reached peak production in 2002 • U.S. Trout production has flattened • U.S. Net pen farming of salmon may have also peaked • An aging workforce echoing what is seen in other agricultural sectors • A Millennial preference for urban employment • The scale back or elimination of university programs in aquaculture 64 »