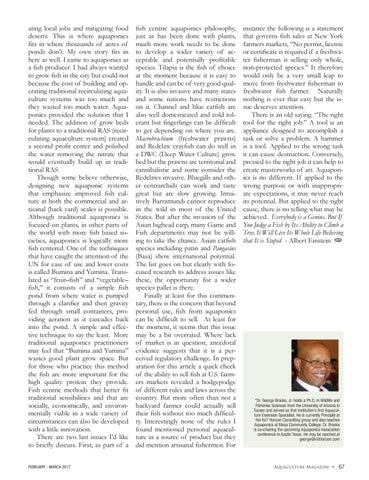 ating local jobs and mitigating food deserts. This is where aquaponics fits in where thousands of acres of ponds don’t. My own story fits in here as well. I came to aquaponics as a fish producer. I had always wanted to grow fish in the city but could not because the cost of building and operating traditional recirculating aquaculture systems was too much and they wasted too much water. Aquaponics provided the solution that I needed. The addition of grow beds for plants to a traditional RAS (recirculating aquaculture system) created a second profit center and polished the water removing the nitrate that would eventually build up in traditional RAS. Though some believe otherwise, designing new aquaponic systems that emphasize improved fish culture at both the commercial and artisanal (back yard) scales is possible. Although traditional aquaponics is focused on plants, in other parts of the world with more fish based societies, aquaponics is logically more fish centered. One of the techniques that have caught the attention of the UN for ease of use and lower costs is called Bumina and Yumina. Translated as “fruit–fish” and “vegetable– fish,” it consists of a simple fish pond from where water is pumped through a clarifier and then gravity fed through small containers, providing aeration as it cascades back into the pond. A simple and effective technique to say the least. More traditional aquaponics practitioners may feel that “Bumina and Yumina” wastes good plant grow space. But for those who practice this method the fish are more important for the high quality protein they provide. Fish centric methods that better fit traditional sensibilities and that are socially, economically, and environmentally viable in a wide variety of circumstances can also be developed with a little innovation. There are two last issues I’d like to briefly discuss. First, as part of a

fish centric aquaponics philosophy, just as has been done with plants, much more work needs to be done to develop a wider variety of acceptable and potentially profitable species. Tilapia is the fish of choice at the moment because it is easy to handle and can be of very good quality. It is also invasive and many states and some nations have restrictions on it. Channel and blue catfish are also well domesticated and cold tolerant but fingerlings can be difficult to get depending on where you are. Macrobrachium (freshwater prawns) and Redclaw crayfish can do well in a DWC (Deep Water Culture) grow bed but the prawns are territorial and cannibalistic and some consider the Redclaws invasive. Bluegills and other centrarchids can work and taste great but are slow growing. Intuitively Barramundi cannot reproduce in the wild in most of the United States. But after the invasion of the Asian bighead carp, many Game and Fish departments may not be willing to take the chance. Asian catfish species including patin and Pangasius (Basa) show international potential. The list goes on but clearly with focused research to address issues like these, the opportunity for a wider species pallet is there. Finally at least for this commentary, there is the concern that beyond personal use, fish from aquaponics can be difficult to sell. At least for the moment, it seems that this issue may be a bit overrated. Where lack of market is in question, anecdotal evidence suggests that it is a perceived regulatory challenge. In preparation for this article a quick check of the ability to sell fish at U.S. farmers markets revealed a hodgepodge of different rules and laws across the country. But more often than not a backyard farmer could actually sell their fish without too much difficulty. Interestingly none of the rules I found mentioned personal aquaculture as a source of product but they did mention artisanal fishermen. For

instance the following is a statement that governs fish sales at New York farmers markets, “No permit, license or certificate is required if a freshwater fisherman is selling only whole, non-protected species.” It therefore would only be a very small leap to move from freshwater fisherman to freshwater fish farmer. Naturally nothing is ever that easy but the issue deserves attention. There is an old saying. “The right tool for the right job.” A tool is an appliance designed to accomplish a task or solve a problem. A hammer is a tool. Applied to the wrong task it can cause destruction. Conversely, pressed to the right job it can help to create masterworks of art. Aquaponics is no different. If applied to the wrong purpose or with inappropriate expectations, it may never reach its potential. But applied to the right cause, there is no telling what may be achieved. Everybody is a Genius. But If You Judge a Fish by Its Ability to Climb a Tree, It Will Live Its Whole Life Believing that It is Stupid - Albert Einstein

*Dr. George Brooks, Jr. holds a Ph.D. in Wildlife and Fisheries Sciences from the University of Arizona in Tucson and served as that institution’s first Aquaculture Extension Specialist. He is currently Principle at the NxT Horizon Consulting group and also teaches Aquaponics at Mesa Community College. Dr. Brooks is co-chairing the upcoming Aquaponics Association conference in Austin Texas. He may be reached at george@nxthorizon.com