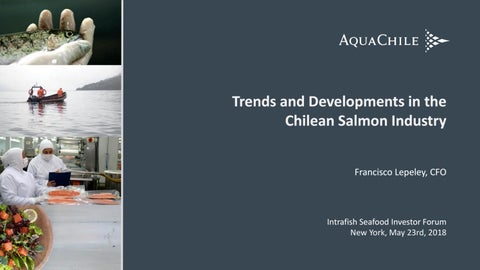 The Salmon industry in Chile is arguably a success story … ▪ High growth ▪ Between the mid 1990s and the mids 2000s, salmon production grew 6 times to become the second largest exporting sector in Chile after copper mining

▪ Value creation ▪ As companies grew profitably, the sector attracted capital from investors and loans from banks, which itself fueled further growth

▪ Job creation and regional development ▪ Southern regions X and XI, which have concentrated most of salmon production, grew significantly in income and employment. Both regions maintain the lowest unemployment rates in the country

… with some bumps down the road ▪ Unrestricted growth would seldom generate oversupply into the markets with the corresponding impact on prices ▪ With limited (or lack of) regulation, Chile was not prepared for the ISAv crisis that affected the industry starting in 2007. Between 2008 and 2010, harvests of salar were reduced by over 70% ▪ As problems arose, most local banks retreated from the industry, constraining capital for production recovery after ISAv crisis. Large players had to raise capital through equity offerings in a wave of IPOs between 2005 and 2011 ▪ Regulation was developed first in 2010 to curb growth on a site by site basis, while also establishing the neighborhood system, which would concentrate production in different sanitary areas during a period of 21-24 months followed by a fallow period of three months ▪ A regulation upgrade in 2016, incorporated more strict parameters that now makes it more difficult for producers to grow and even maintain the production levels at the different licenses

▪ Current consensus projects an average growth rate of 3%-6% per annum for Chile in the next 3 years Page. Nº4

▪ How to best take advantage of the current tailwind?

▪ Density rule tends to reduce density for all producers in a given sanitary area from a maximum legal of 17 (kg/m3) to as low as 8 (kg/m3), depending on previous sanitary performance, stocking declarations from producers, and environmental status of the area. Limitations are also set on the number of fish per each individual license, based on individual performance ▪ Alternatively, PRS (stocking reduction plan) rule sets limits for the number of smolts per site, with a likely potential for reduction from previous cycle if mortality was at normal levels ▪ All new licenses or those that were not utilized in the previous cycle must operate under density rule

▪ As of today, 49% of active licenses in regions X and XI are operating under density rule, while 51% are under stocking reduction plan (“PRS”) rule

What avenues for growth are left? ▪ If using density rule, by increasing the number and size of cages - when possible - to accommodate the same number of fish in a license at a lower density. This is partially working, as the industry average number of smolts being stocked per license has moved since 2016 from 1 million to 850k ▪ Using more licenses. Normally, salmon producers have an excess of licenses, as those are specific to certain location and the regulation promotes the rotation of licenses with fallow periods between production cycles. For instance, AquaChile uses in any calendar year approximately 1/4 of its licenses and roughly 50% in 5 years time ▪ Expansion to Region XII (Magallanes) with more strict rules and limitations for the granting of new licenses. Area with high potential for sustainable production. Magallanes region is already concentrating 11% of Chilean production (up from 3% four years ago) ▪ Improved sanitary and productive performance should lead to more and bigger fish

Salmon and trout production breakdown across regions in Chile (2010 – 2017)

Regulation has room for improvement ▪ New set of regulation has proven successful in moderating growth. Annual growth projections between 3% and 6% for 2018-2020

▪ Sanitary improvements believed to be related to lower densities and also to the use of new vaccines, which, in addition to direct economic benefits, current regulation promotes by punishing mortality ▪ Despite improvements, current regulation introduces two main challenges to industry players: ▪ Low predictability, especially under density rule, as stocking intention of neighbors are unknown though a key factor in determining the maximum density for a sanitary area ▪ Less economies of scale: less fish per site and at a lower density ▪ Additionally, current system does not prevent too much proximity between neighboring farms ▪ Improvements in regulation could strengthen further the sustainability and competitiveness of the Chilean salmon industry ▪ Relocation and merging of licenses: less (more isolated) and larger sites ▪ Definition of maximum aggregate biological capacity for macrozones and the overall system

Access to capital ▪ Stronger balance sheets ▪ Despite some deterioration in results during 2014-2015, Chilean producers have reduced leverage by more than half in the last 5 years

▪ Banks are back Source: AquaChile

▪ Oslo IPOs ▪ The combination of a depressed local stock market, and the strong appetite and sentiment abroad around the sector, and particularly the Chilean salmon industry, have motivated some players to consider such markets to gain access to a wider and deeper investor base, with a potential also to close the valuation gap with Norwegian players

Consolidation ▪ There are 20+ salmon producing companies in Chile with more than 5,000 tons per year each

▪ Three largest Chilean producers concentrate 30% of harvests (vs. 44% for top 3 producers in Norway)

▪ In comparison to other major Chilean exporting industries (mining, pulp), salmon farming is by far the least concentrated

▪ Based on its Herfindahl-Hirschman index (HHI)*, the Chilean salmon industry is highly competitive, and even more if Coho and Trout are considered

▪ Beyond pure growth, consolidation will produce economies of scale, more room to maneuver in the use of licenses, and more bargaining power in front of suppliers, who across several categories concentrate among the top 3 firms between 70% and 80% of the market

In summary ▪ The Chilean salmon industry developed fast and without much control ▪ As it moves into adulthood, there are positive signs of more stability and experience ▪ Regulation seems to be finally working with significant room for improvement ▪ The combination of sound operational and sanitary management, a more effective approach to the market together with the strong demand fundamentals, and the continuous strengthening of companies through a better access to capital and industry consolidation, will provide solid ground for a sustainable growth of the industry

A few words on AquaChile ▪ AquaChile is a vertically integrated company that is present across the whole value chain, from breeding and genetics to the processing and final marketing of our products ▪ With over 20 hatcheries and 154 sea water licenses in regions X, XI and XII of Chile, AquaChile is one of the leading salmon producing companies in Chile and worldwide