‘We don’t see things as they are, we see them as we are.’ Anais Nin

Created, written and drawn by Andrew Wildman Art assistance by Alies Meerman and Ed Pirrie This edition published in Great Britain by Paper Theatre www.papertheatre.co.uk HORIZON - The Falling copyright ÂŠ 2013 Andrew Wildman For further information about HORIZON visit www.horizongraphicnovel.com Special thanks to Jo Davis, All rights reserved. No portion of this publication may be reproduced or transmitted in any form without permission from the creator. Small extracts of this work may be used for publicity or review purposes. This book is a work of fiction. Any resemblances to situations or persons living or dead is purely coincidental. Printed in the UK

introduction They say life imitates art and vice versa. Like this book, life is a work in progress. Those who have read book one will know that HORIZON was intended to be a single volume. But life came along and interrupted that and I decided to do the book in two parts. The interesting thing for me was having made that decision new areas for HORIZON opened up. Sometimes, with the best laid plans in place, you just have to go with the flow. You just have to go where it takes you and this book has very much demonstrated that. Sometimes my intention was to go one way and yet the book would want to go the other. Sometimes I would intend on depicting one thing, but when I cam e to draw it, something else would come up. But in many ways that is perfect because that is exactly what HORIZON is about. It’s about life, and how it flows ad how sometimes you have to stay ‘present’, accept it as it is and go where it takes you. So I said two books. Well not quite. Something else that came up was that the big scene and resolution in this book (around page 33) was supposed to be the conclusion to HORIZON. That was it. - you will see what I mean when you get there - but it wasn’t until I got there that it was clearly not supposed to be the end. It was clear that there was something missing. So that all means that what you now hold in your hands is not the end of the story, but the middle. But for now, jump in and go on Ali’s journey of discovering who that big bot is that we have been seeing for a while. She needs to know, and she wants you to be there with her. Love and rabbits, Andrew Wildman.

Alisanne is a 15 year old girl. Her life quite simply, for her, doesn’t work. She has lost the one she loves the most and everyone else is the enemy. She is stuck in between. Between childhood and adulthood, between life and death, between school and home, between then and now and between waking and dreaming. Irritated by her mother, bullied at school, challenged by her counsellor she falls… into a dream… where everything begins to change. When we saw her last her talking toy rabbit, Moon, a gift from her father many years ago, was guiding her through her nightmare. Teaching her to be ‘present’ and overcoming her anxiety of being caught out at every turn. Now something bigger is stalking her. Something that to her is quite simply, Fear. Sometimes the only way to wake up… is to fall asleep. 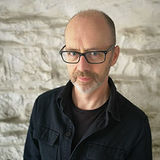