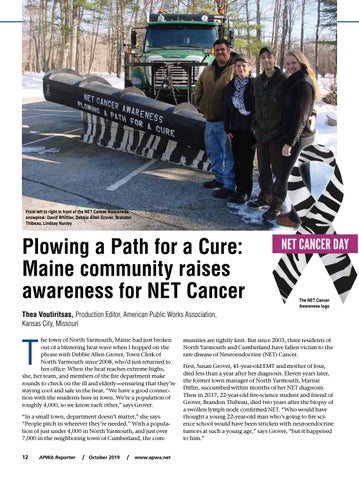 Plowing a Path for a Cure: Maine community raises awareness for NET Cancer

he town of North Yarmouth, Maine had just broken out of a blistering heat wave when I hopped on the phone with Debbie Allen Grover, Town Clerk of North Yarmouth since 2008, who’d just returned to her office. When the heat reaches extreme highs, she, her team, and members of the fire department make rounds to check on the ill and elderly—ensuring that they’re staying cool and safe in the heat. “We have a good connection with the residents here in town. We’re a population of roughly 4,000, so we know each other,” says Grover. “In a small town, department doesn’t matter,” she says. “People pitch in wherever they’re needed.” With a population of just under 4,000 in North Yarmouth, and just over 7,000 in the neighboring town of Cumberland, the com12

munities are tightly knit. But since 2003, three residents of North Yarmouth and Cumberland have fallen victim to the rare disease of Neuroendocrine (NET) Cancer. First, Susan Grover, 41-year-old EMT and mother of four, died less than a year after her diagnosis. Eleven years later, the former town manager of North Yarmouth, Marnie Diffin, succumbed within months of her NET diagnosis. Then in 2017, 22-year-old fire-science student and friend of Grover, Brandon Thibeau, died two years after the biopsy of a swollen lymph node confirmed NET. “Who would have thought a young 22-year-old man who’s going to fire science school would have been stricken with neuroendocrine tumors at such a young age,” says Grover, “but it happened to him.”

October 2019 issue of the APWA Reporter, the official magazine of the American Public Works Association 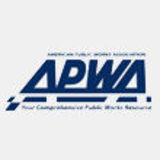