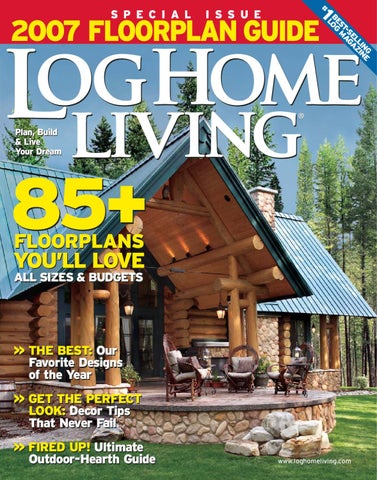 &gt;&gt; THE BEST: Our Favorite Designs of the Year &gt;&gt; GET THE PERFECT LOOK: Decor Tips That Never Fail &gt;&gt; FIRED UP! Ultimate Outdoor-Hearth Guide

Home Again AFTER NEARLY 60 YEARS AWAY, JACK HOLCOMB WAS DRAWN BACK TO THE KENTUCKY MOUNTAINS OF HIS BOYHOOD, MAKING THEM THE SERENE SETTING FOR HIS GRAND LOG HOME.

ack Holcomb has come a long way from

the small Kentucky town where he was born. So far, in fact, that after a nearly 60-

year absence, he has finally come full circle and made his way home again. A successful career designing and developing electronic intelligence equipment led him around the world, but after celebrating his 70th birthday, Jack found his spirit irresistibly drawn towards the gentle folds of the Appalachians where he was born.

Far from the pollution of city lights, factory smog and vehicle emissions, the new moon rises in a clear night sky above the Holcombsâ&amp;#x20AC;&amp;#x2122; ranch in Ashland, Kentucky.

The globetrotting entrepreneur sums up the yearning that finally brought him back by quoting John Muir, one of the primary architects of Yosemite National Park. “Someone asked him why he was going to Yosemite,” Jack recalls. “He said, ‘The mountains are calling, and I must go.’ I felt the same way.”

Appalachian Style Today, Jack and his wife, Dede, split their time between Fort Lauderdale and the spacious log home they built on a 440-acre ranch in Ashland, Kentucky. Although he’d never lived in a log home, Jack’s fondness for the Old West and for 19th-century antiques, which always look at ease among rustic timbers, led him to logs. He ultimately selected Appalachian Log Structures as his log provider, not only because of the proximity of their West Virginia office, but because of his rapport with the company’s president, Doug Parsons. “He’s a very friendly, helpful person,” Jack notes— and the admiration is mutual. “I’ve told Jack that he has really good dreams,” Doug says. Looking at the home Jack designed himself—nestled among green velvet hills and a trio of lakes teeming with bass—it’s hard to argue. “I didn’t want to buy a standard anything,” Jack insists. Drawing upon his engineering background and a stack of log home magazines for inspiration, he sketched out detailed plans for his home, as well as a host of other structures on the ranch. Then he handed his sheaf of papers over to Appalachian Log Structures to translate ABOVE LEFT: Long before the first log was stacked, Jack Holcomb had planned a cozy berth for his mammoth model ship. The 6-foot-long vessel, a model of the 17th-century French flagship Superb, took two men two years to build. Now it holds a place of honor in an arched window overlooking the portico above the front entryway. LEFT: A 125-year-old stained-glass window bearing the names of Jack’s grandparents rests on the fireplace mantel below a Civil War rifle and sword, providing a tangible link to the past. 58 LOG HOME LIVING APRIL 2007

The well-worn boots on the coffee table—a favorite pair of Jack’s that Dede had bronzed—are evidence of his love of adventure and the outdoors. A callback to Jack’s rodeo days, they serve as a playful accent among more pedigreed bronzes from the early 19th century.

The large kitchen, which incorporates oak cabinets topped by granite counters, is centered around an island range. Dede is renowned for her cooking skills, whipping up everything from prime rib to turkey and dressing. The tile floor, which features deliberately worn edges for a more rustic look, is an excellent conductor for the radiant heating installed throughout the home.

ABOVE: Ranch manager Harry “Top” Hishon worked with Jerry O’Brien, a marketing specialist for Thomasville Contract Furniture, to select the furnishings throughout the home, including the elegant Palais Jardin dining table. The matching hutch displays a collection of fine china, including a red Wedgwood pattern also used by Queen Elizabeth II.

f there’s one thing Jack Holcomb’s background in engineering taught him, it’s the importance of backup systems. Not only does his ranch in Ashland, Kentucky, have solar panels and generators that can provide power in case of a blackout, but Jack also installed three underground cisterns, ranging from 63,000 to 75,000 gallons, to augment his water supply. The cisterns collect rainwater, which runs off the roof into gutters

that are screened to strain out larger sediment. From the gutters, the H2O flows into the cistern through PVC pipes. When more water is needed, a pump, similar to a pool pump, forces it into a pressurized system. It then passes through a purifying UV filter before it’s released into the taps. “Jack was a Boy Scout,” explains his ranch manager, Top Hishon. “His belief is to always be prepared.” —A.L.

ABOVE: In the master bedroom, Wowo, a teacup Yorkie, and his pal Snowball take a break from all the excitement on the ranch to catch their favorite shows on the flat-screen television mounted to the dry-stacked stone fireplace. The door to the left of the hearth provides direct access to the home’s wraparound porch. RIGHT: The Holcombs’ home features not just one, but two master bathrooms—his and hers. Dede’s incorporates both a spacious walk-in shower and a marble-enclosed Jacuzzi tub.

them into blueprints. Stacy Nelson, who supervised the log construction, transformed them into reality.

On the porch, a rocking chair is positioned to take in the bucolic view of unfurling fields. When Jack really wants to see what’s happening over hill and dale, he peers through a powerful pair of binoculars salvaged from a decommissioned military cruiser.

Open to Below Bedroom

Massive round logs of yellow pine, which often serve as telephone poles around the Southeast because of their size and strength, are mounted as beams in the generous portico, setting the tone for the lodge-like grandeur within. At least one room, however, wasn’t quite as expansive in the initial design. The portion of the great room beyond the fireplace originally was intended to be a portico, and the house was nearly under roof when Jack decided to enclose it. “He said, ‘My great room isn’t great enough,’” Gary Parsons of Appalachian Log Structures recalls with a chuckle. The resulting enlarged space stretches 60 feet into a giant Palladian window that captures a view of the valley and the mountains beyond. But it’s not just the room’s outsized dimensions and framed vistas that make it “great” in every sense of the word. Enormous log beams that measure up to 2 feet in diameter are evidence that the home was built to last. “We worked for weeks on those rafters,” recalls Stacy, who cut and fitted the logs onsite using a chainsaw, a forklift and a crane. He estimates that each log weighs about 1,000 pounds. Equally hefty Eastern white pine logs form the exterior walls, as well as several interior partition walls, creating a feeling of solid strength that befits a home of such striking proportions. Immense floor-toceiling stone fireplaces, three times the width of the actual firebox, provide a handsome focal point for the master bedroom as well as the great room, which soars to 22 feet. “It has been a process of going home—back to the things I grew up looking at, like the mountains and the hills and the Ohio River,” says Jack, who seems to find the country life rejuvenating. “I tell people I get up in the morning and eat hay and chase bears with a switch,” he says with a laugh. With an attitude like that, he ought to enjoy his new Kentucky home for years to come. ■ 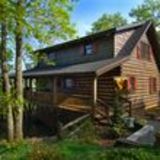