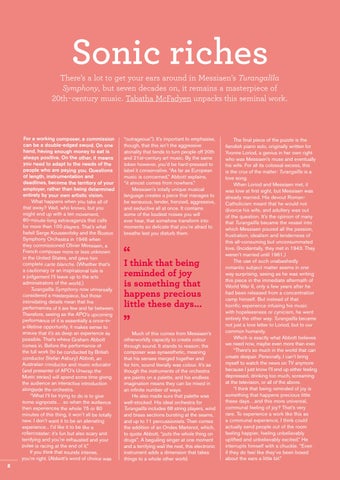 There’s a lot to get your ears around in Messiaen’s Turangalîla Symphony, but seven decades on, it remains a masterpiece of 20th-century music. Tabatha McFadyen unpacks this seminal work.

For a working composer, a commission can be a double-edged sword. On one hand, having enough money to eat is always positive. On the other, it means you need to adapt to the needs of the people who are paying you. Questions of length, instrumentation and deadlines, become the territory of your employer, rather than being determined entirely by your own artistic vision. What happens when you take all of that away? Well, who knows, but you might end up with a ten movement, 80-minute-long extravaganza that calls for more than 100 players. That’s what befell Serge Koussevitzky and the Boston Symphony Orchestra in 1946 when they commissioned Olivier Messiaen, a French composer more or less unknown in the United States, and gave him complete carte blanche. (Whether that’s a cautionary or an inspirational tale is a judgement I’ll leave up to the arts administrators of the world.) Turangalîla Symphony now universally considered a masterpiece, but those intimidating details mean that live performances of it are few and far between. Therefore, seeing as the APO’s upcoming performance of it is essentially a once-ina-lifetime opportunity, it makes sense to ensure that it’s as deep an experience as possible. That’s where Graham Abbott comes in. Before the performance of the full work (to be conducted by British conductor Stefan Asbury) Abbott, an Australian conductor and music educator (and presenter of APO’s Unwrap the Music series) will spend some time giving the audience an interactive introduction alongside the orchestra. “What I’ll be trying to do is to give some signposts… so when the audience then experiences the whole 75 or 80 minutes of this thing, it won’t all be totally new. I don’t want it to be an alienating experience... I’d like it to be like a rollercoaster: it’s fun but also scary and terrifying and you’re exhausted and your pulse is racing at the end of it.” If you think that sounds intense, you’re right. (Abbott’s word of choice was

“outrageous”). It’s important to emphasise, though, that this isn’t the aggressive atonality that tends to turn people off 20th and 21st-century art music. By the same token however, you’d be hard-pressed to label it conservative. “As far as European music is concerned,” Abbott explains, “it almost comes from nowhere.” Messiaen’s totally unique musical language creates a piece that manages to be sensuous, tender, frenzied, aggressive, and seductive all at once. It contains some of the loudest noises you will ever hear, that somehow transform into moments so delicate that you’re afraid to breathe lest you disturb them.

I think that being reminded of joy is something that happens precious little these days…. Much of this comes from Messiaen’s otherworldly capacity to create colour through sound. It stands to reason; the composer was synaesthetic, meaning that his senses merged together and for him, sound literally was colour. It’s as though the instruments of the orchestra are paints on a palette, and his endless imagination means they can be mixed in an infinite number of ways. He also made sure that palette was well-stocked. His ideal orchestra for Turangalîla includes 68 string players, wind and brass sections bursting at the seams, and up to 11 percussionists. Then comes the addition of an Ondes Martenot, which, to quote Abbott, “puts the whole thing on drugs”. A beguiling singer at one moment and a terrifying wail the next, this electronic instrument adds a dimension that takes things to a whole other world.

The final piece of the puzzle is the fiendish piano solo, originally written for Yvonne Loriod, a genius in her own right who was Messiaen’s muse and eventually his wife. For all its colossal excess, this is the crux of the matter: Turangalîla is a love song. When Loriod and Messiaen met, it was love at first sight, but Messiaen was already married. His devout RomanCatholicism meant that he would not divorce his wife, and adultery was out of the question. It’s the opinion of many that Turangalîla became the vessel into which Messiaen poured all the passion, frustration, idealism and tenderness of this all-consuming but unconsummated love. (Incidentally, they met in 1943. They weren’t married until 1961.) The use of such unabashedly romantic subject matter seems in one way surprising, seeing as he was writing this piece in the immediate aftermath of World War II, only a few years after he had been released from a concentration camp himself. But instead of that horrific experience infusing his music with hopelessness or cynicism, he went entirely the other way. Turangalîla became not just a love letter to Loriod, but to our common humanity. Which is exactly what Abbott believes we need now, maybe even more than ever. “There’s so much in the world that can create despair. Personally, I can’t bring myself to watch the news on TV anymore because I just know I’ll end up either feeling depressed, drinking too much, screaming at the television, or all of the above. “I think that being reminded of joy is something that happens precious little these days…and this more universal, communal feeling of joy? That’s very rare. To experience a work like this as a communal experience, I think could actually send people out of the room feeling happier, feeling unbelievably uplifted and unbelievably excited.” He interrupts himself with a chuckle. “Even if they do feel like they’ve been boxed about the ears a little bit.”

This is the Summer 2019 edition of our biannual Phil News publication.