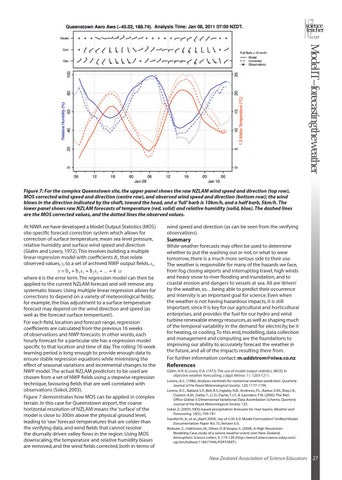 Figure 7: For the complex Queenstown site, the upper panel shows the raw NZLAM wind speed and direction (top row), MOS corrected wind speed and direction (centre row), and observed wind speed and direction (bottom row); the wind blows in the direction indicated by the shaft, toward the head, and a ‘full’ barb is 10km/h, and a half barb, 5km/h. The lower panel shows raw NZLAM forecasts of temperature (red, solid) and relative humidity (solid, blue). The dashed lines are the MOS corrected values, and the dotted lines the observed values. At NIWA we have developed a Model Output Statistics (MOS) site-specific forecast correction system which allows for correction of surface temperature, mean sea level pressure, relative humidity and surface wind speed and direction (Glahn and Lowry, 1972). This involves building a multiple linear regression model with coefficients Bi, that relate observed values, y, to a set of archived NWP output fields, xi, y = b0 + b1x1 + b2x2 + ... + e (2) where e is the error term. The regression model can then be applied to the current NZLAM forecast and will remove any systematic biases. Using multiple linear regression allows for corrections to depend on a variety of meteorological fields; for example, the bias adjustment to a surface temperature forecast may depend on the wind direction and speed (as well as the forecast surface temperture!). For each field, location and forecast range, regression coefficients are calculated from the previous 16 weeks of observations and NWP forecasts. In other words, each hourly forecast for a particular site has a regression model specific to that location and time of day. The rolling 16-week learning period is long enough to provide enough data to ensure stable regression equations while minimising the effect of seasonal variations and incremental changes to the NWP model. The actual NZLAM predictors to be used are chosen from a set of NWP fields using a stepwise regression technique, favouring fields that are well correlated with observations (Sokol, 2003). Figure 7 demonstrates how MOS can be applied in complex terrain. In this case for Queenstown airport, the coarse horizontal resolution of NZLAM means the ‘surface’ of the model is close to 300m above the physical ground level, leading to ‘raw’ forecast temperatures that are colder than the verifying data, and wind fields that cannot resolve the diurnally driven valley flows in the region. Using MOS downscaling, the temperature and relative humidity biases are removed, and the wind fields corrected, both in terms of

wind speed and direction (as can be seen from the verifying observations).

Summary While weather forecasts may often be used to determine whether to put the washing out or not, or what to wear tomorrow, there is a much more serious side to their use. The weather is responsible for many of the hazards we face, from fog closing airports and interrupting travel, high winds and heavy snow to river flooding and inundation, and to coastal erosion and dangers to vessels at sea. All are ‘driven’ by the weather, so…being able to predict their occurrence and intensity is an important goal for science. Even when the weather is not having hazardous impacts, it is still important, since it is key for our agricultural and horticultural enterprises, and provides the fuel for our hydro and wind turbine renewable energy resources, as well as shaping much of the temporal variability in the demand for electricity, be it for heating, or cooling. To this end, modelling, data collection and management and computing are the foundations to improving our ability to accurately forecast the weather in the future, and all of the impacts resulting there from. For further information contact: m.uddstrom@niwa.co.nz